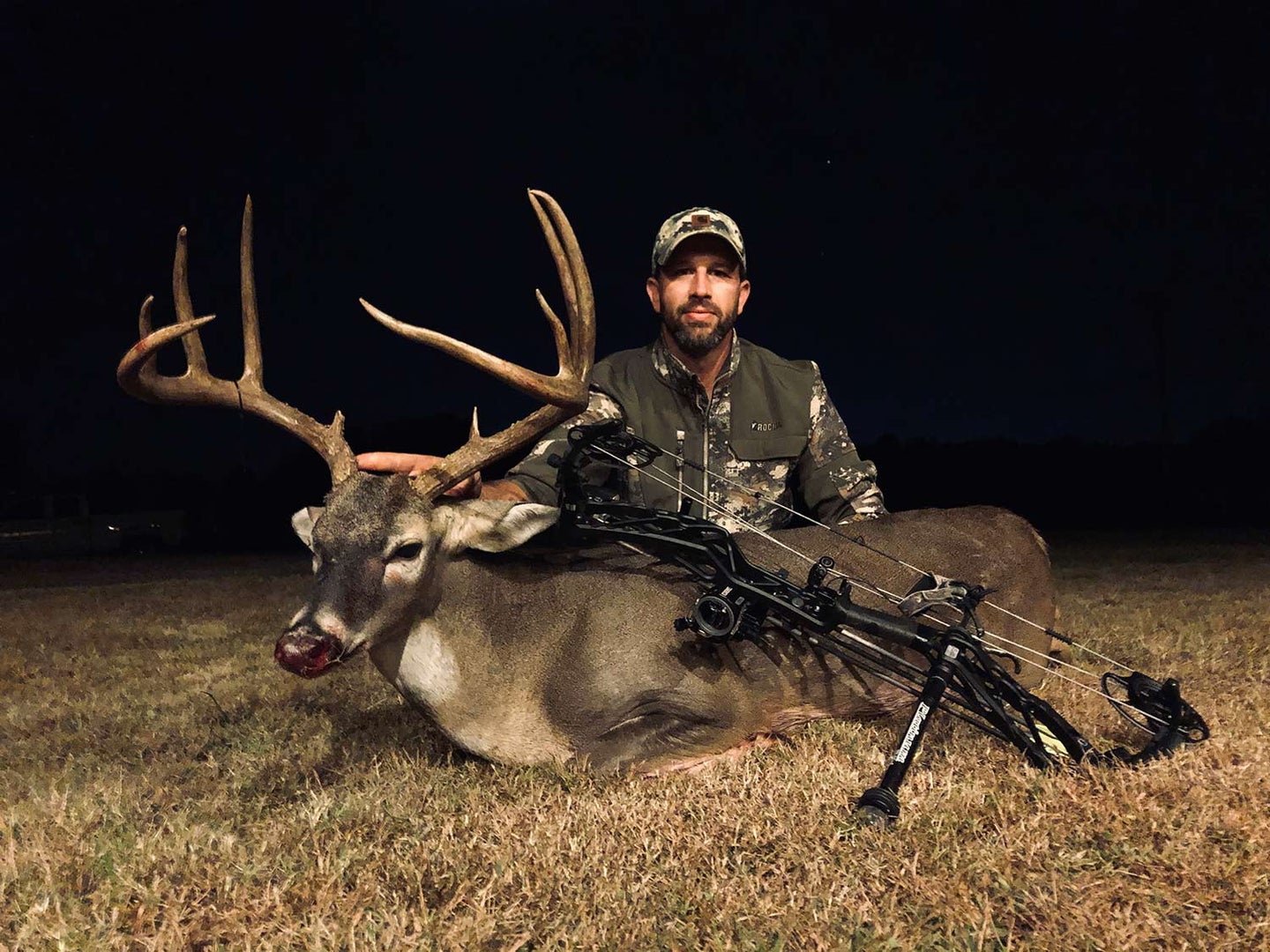 There may not be a tougher critter to hunt than a big-woods, mountain whitetail deer. In such country, a buck can bed wherever it damn well pleases. Pinch points are all but invisible on topo maps. And the hot food source could be a green briar patch one day and a red oak a quarter mile away the next. Playing the wind? Even with a westerly forecast, terrain and thermals could funnel it due east.

That’s what makes the 10-pointer Nathan Brooks shot in the Ozark National forest back in early November so impressive. It’s no high-scoring Midwestern freak—a rough measurement put it at 149 7/8—but if you know what you’re looking at, this deer is one of the most impressive bow trophies of the 2019 season.

A Bowhunter with Mountain Roots

Brooks grew up in eastern Oklahoma, and now he lives about an hour away, on the Arkansas side of the line. The Ozark Mountains have been his stomping grounds since he was a kid, and he’s always had a special interest in bowhunting. He currently works full time in the archery industry as a product developer, analyst, and pro shooter for Elite. He’s been shooting competitively for 22 years.

“My whole family deer hunts,” Brooks says. “For as long as I can remember, I watched my dad shoot a bow, and I got into competitive shooting through bowhunting. In order to go hunting with Dad, he wanted to be sure I could hit something. So, we started going to archery tournaments when I was 11.”

Brooks became a pretty good shot—so much so that he’s now a force to be reckoned with on the 3-D circuit. He won the IBO World Championship in 2004 and 2016, and was the ASA National Champion in 2017. While the tournaments helped him become a good archer, the Ozarks taught him to become a woodsman. “The advice you see in most videos and articles on how to deer hunt, you can basically throw it out the window around here,” he says. “These deer need bedding cover, food, and water like any other, but it’s hard to determine where all those areas are. They can bed just about anywhere they want. We had a huge mast crop this year, and that scatters them all over the place.”

Focusing on mature bucks makes it even tougher. “I’ve been hunting this area of the forest for almost 15 years,” he says. “It’s really thick, and with a good mix of timber. White oaks, red oaks, cherry trees, and a lot of tangled up vines. It’s pretty hard to hunt until you start seeing buck sign, and even then, I’ve hunted here a week straight without laying eyes on a deer.”

But that difficulty is precisely the appeal for Brooks. “I have the place almost to myself during bow season, but it gets a fair bit of gun hunting pressure. It’s not hard to access, but the country is tough to get around in. Shoot a buck here, and you’re quartering him up to get him out,” he says. “An 8-pointer or 10-pointer that scores 115 to 130 and field dresses 135 pounds is a good one. They’re in there, but you almost never see them. In fact, I’ve shot seven or eight mature bucks here, and I don’t think I’d ever seen a one of them prior to shooting him.”

This year’s hunt was a perfect example—albeit with a bigger deer—of a chase for a mature Ozark whitetail. Brooks got a couple trail camera photos of the animal two seasons ago, when he guessed him to be 3 ½ years old. But where the buck spent most of his time was anyone’s guess. “I had pictures of him that year, but nothing from last year,” he says. “Then this season, I started getting pics of him again in October, about a half mile from where I killed him. But the pics were always late at night.”

The plus side of hunting national forest land is that you can move around without worrying much over boundaries and property lines. Brooks likes to slip into his hunting areas to scout and hang cameras right after a good rain. Otherwise, he says, walking around is just too noisy. “That’s one of the things that makes this area where I killed the buck good,” he says. “I sneak down a creek bed, and I can get in there undetected.”

Brooks bombed the area with cameras, hoping for the lucky photo that would help him devise a plan for getting close to the buck during shooting light. And he got it, when the deer appeared on the edge of a private field about a quarter mile away. Brooks began backtracking likely travel routes, and eventually found an area torn up with fresh scrapes and rubs. Upon finding that, he decided to try his luck with an evening hunt from his climbing stand. “I didn’t have a real indication that sign was from this deer, but I sure hoped it was,” he says. “It’s halfway down in a holler on a big flat, with a lot of pines. It’s a nice spot.”

The first deer Brooks saw from the tree that evening was a doe, but then the situation escalated quickly. “She came through at around 5 o’clock, nervous as could be,” he says. “I knew she wasn’t smelling me, and it wasn’t long before I heard a good grunt. Here he came in, from the south, just like I’d hoped. She took off soon as she saw him, and he came right down the trail to my tree.”

Brooks prepared his shot routine, and when the buck passed by at 7 yards, he made a perfect hit. The deer ran a semi-circle and crashed within sight. “I honestly didn’t get shaken up when he came in, and I usually don’t get nervous during the shot,” Brooks says. He credits tournament shooting for a lot of that. “But after I saw him pile up? My heart started racing then. I love that feeling.”

But for a few shortcomings—tiny brow tines and short G4s, compared to the 2s and 3s—this deer would be threatening the B&C typical minimum, and bucks like that don’t come easily with a bow, anywhere. In the Arkansas Ozarks, it’s the deer of a lifetime.

“In the 20 years I’ve been hunting here, I’ve only seen one buck larger than this one, and my buddy killed him,” Brooks says. “But honestly, I felt like I’ve hunted some other deer harder, and earned them more. I really didn’t put in a ton of hours on this buck.”