10 Proven Ways to Grow Giant Bucks On Your Land

Taking big bucks on limited acres can be challenging. However, with these simple tips, you can turn any property into a whitetail hotspot. 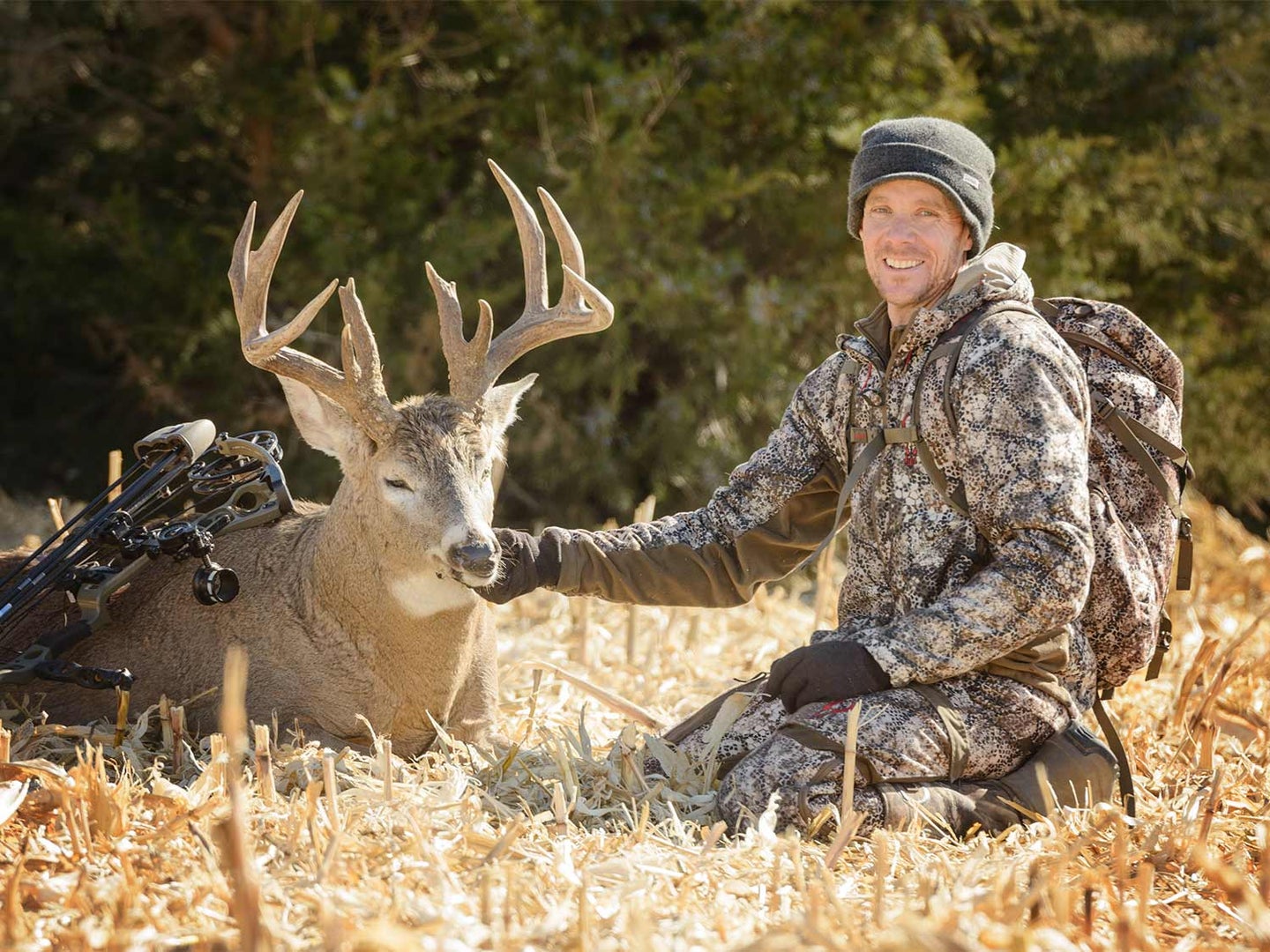 Author Buck – The author harvested this massive Nebraska buck from the same alfalfa plot in November of 2019. Brooke Bauer
SHARE

I’m a public-land grinder. My whitetail hunts typically happen on open-to-anyone dirt or small chunks of private land gained by knock-on-door permission—with one exception. For one week each year, I’m fortunate enough to be invited to hunt a small 80-acre parcel in Nebraska owned by my friend Terron Bauer.

Bauer lives in Superior, Nebraska, and knows virtually everyone in 100-square-mile radius. He receives hundreds of Facebook and Instagram inquiries each day from hunters who ask him questions like: Where should I sit this evening? My best food plot is near a funnel, do you think the deer will be using it? It would drive me crazy, but he answers every single one.

A few years back, Terron’s dad, Terry, purchased a small piece of dirt. It didn’t look like much, and there were very few deer on it, but Terron was elated. He saw what the property could be, and went to work. Last year, Bauer took a pair of Nebraska gaggers from the property — an ancient double drop-tine buck and a 5 ½-year-old, 150-inch stud with crazy mass. This fall, I shot my biggest buck to date off that same farm. Bauer has made the place a whitetail nirvana. You can do the same—even if you’re hunting a small parcel of land. Here’s how he did it.

Comprised mostly of native grasses and cedar, food was hard to come by on the Bauer property. That situation needed to change.

“Whitetails have to eat,” Bauer says. “The property had plenty of cover, but there was no food. The first thing I did was look for a central location where I could set up a small kill plot. I found a flat piece of ground with multiple travel corridors nearby. My food of choice was Roundup Ready Alfalfa. I wanted a perennial that I wouldn’t have to replant each year, and alfalfa is loaded with protein. I also didn’t want to fight the weeds. I wanted the deer to have a clean, healthy food source. You can’t go wrong with Roundup Ready Alfalfa.

“In addition to the alfalfa, I wanted an annual grain. Grains are an important source of carbohydrates, and I wanted to keep deer on my property during the rifle season and through the tough winter months. Soybeans are great. Deer love them. This was my choice for what I call a destination plot. Add food and your property will get better right away.”

Many land managers, especially those with small chunks, stop with food. Not Bauer.

“Deer will take the path of least resistance,” he says. “I studied aerial images of the farm — taking special notice of the terrain features — and tried to predict how deer would access my food sources. During the summer, I went in with a chainsaw and pruners and built runways. I cleared brush and debris and made easy-to-travel paths. The deer use these like crazy. It was one of the best things I ever did on the farm.”

While building travel corridors, Bauer took special note of where he didn’t want the deer to go. Then he closed those trails.

“When hunting a small property, you can’t leave things to chance,” Bauer says. “It’s all about putting in the work—making the property better in every way possible. Dropping a tree or 10 can change a deer’s path of travel. I want the deer using the trails that lead to my food source, so I do my best to close other trails and force them to use my manicured paths.”

4. Rubs Where You Want Them

You know when you’re hunting Terron Bauer’s ground: You’ll find a cedar post with an attached licking branch on every plot, funnel, and pinch point. And bucks use them—a lot.

“This is something that is very effective and very economical,” Bauer says. “Anyone can do this. All you need is a good cedar post. Deer love aromatic wood, and they can’t help but stop and blaze cedar, especially one that has forehead gland rubbed on it. Bury the cedar post, attach a licking branch, and put in a mock scrape. I like to add forehead gland scent, but it’s not a must. You can drill holes in the wood and add a licking branch. The rub-and-scrape combo draws deer, and more importantly, stops them in a location where you can get a good shot. These rub-and-scrape combos are also great trail camera locations. Deer start hitting mine, especially ones with scrapes they’ve used in past years, in late summer.”

My property is small, but it has lots of cover,” Bauer says. “My goal is to hold deer on my place. That’s why I started enhancing known doe bedding areas. This process is very easy. Locate a few bedding areas on your ground, and then go in with a chainsaw and do some hinge-cutting. Hinge-cutting is cutting a tree ½ to ¾ of the way through and letting it fall over. Most of the time, the tree will continue to live, which means it will have foliage. Hinge cuts, if cut parallel with the ground, create great side cover—does love it. If you know where your does are bedding, you know where your bucks will be cruising.”

Building buck beds is another great tip for enhancing your small property. Last spring, while turkey hunting with Bauer, I saw his buck beds first hand. All of them showed evidence of white belly hair, and the surrounding timber was marked with countless rubs.

“Cedar trees are my favorite for creating buck beds,” says Bauer. “I look at the topography. It doesn’t take much, but bucks love to bed on some elevation. Once I locate a likely area, I remove the low-hanging branches, which makes the bed easy to enter and exit. Bucks won’t bed in a place they can’t get out of. To add a little icing to the cake, I find a log about 4-feet-long and no less than 16 inches in diameter. I hollow out a little spot in the ground and set the log against the base of the cedar. This gives the buck a backrest — something to lean up against.”

When hunting small acreages, you can’t afford to tip your hand to deer. Entrance and exit routes must be methodically considered. Bauer goes the extra mile.

“One of my best doe bedding areas is very close to the alfalfa plot,” he says. “Last year, after the season ended, I went and got in the bedding area. I got down to a bedded deer’s height and then had a buddy walk into the stand. Sure enough, I could see him. It was difficult, but if I was looking just right, I could see him. Remember, leave nothing to chance. There wasn’t time to plant screening cover, so we simply dropped and moved a few cedars. You must be able to get in and out of your stand without deer knowing it.”

I hate the wind. So does Bauer. When you have only a couple of stands on a given property, the wind can cripple the number of sits you get in. Unless …

“I hated to spend the money, but now I know it’s one of the best investments I ever made,” Bauer says. “I bought a Banks Blind and put it on an elevated platform. With the windows closed and the ducts taped, I can get away with murder in that thing. The last three deer shot on the property were harvested on days when the wind was blowing from the worst possible direction. You could’ve never hunted it from a treestand. When it’s right, it’s right, and I want to be in the middle of the action and not sitting at home waiting on a favorable wind.”

Even with a blind, you can overhunt a property, especially a small one. Bauer only hunts his little slice of paradise when his cameras tell him things are rocking.

“I will hit it once or twice in early September if I have a good velvet buck I want to go after, but outside of that, I stay out until the rut,” he says. “Too many guys and gals go hunt just to hunt. Why? Every time you do that, you run the risk of bumping deer. When the rut starts to rock and my cameras are showing consistent activity, I go in. Last year I made three sits and killed two big deer.”

One thing I admire about Bauer is his work ethic. This year, after killing my 160-inch brute, I told him, “It’s amazing what you’ve done with this place.”

His answer, “Wait until you see it next year.”

“Keep learning,” he says. “You can always do little things to make your property better. This location has three ponds on it. If there wasn’t water, I’d be putting in a pond. Bedding area work can always be done. Keep making your little acreage better and it will be good to you, I promise.”