7 Short Tales of Toughness in the Wild

These stories are about guns, dogs, hunters, and game that just won’t quit 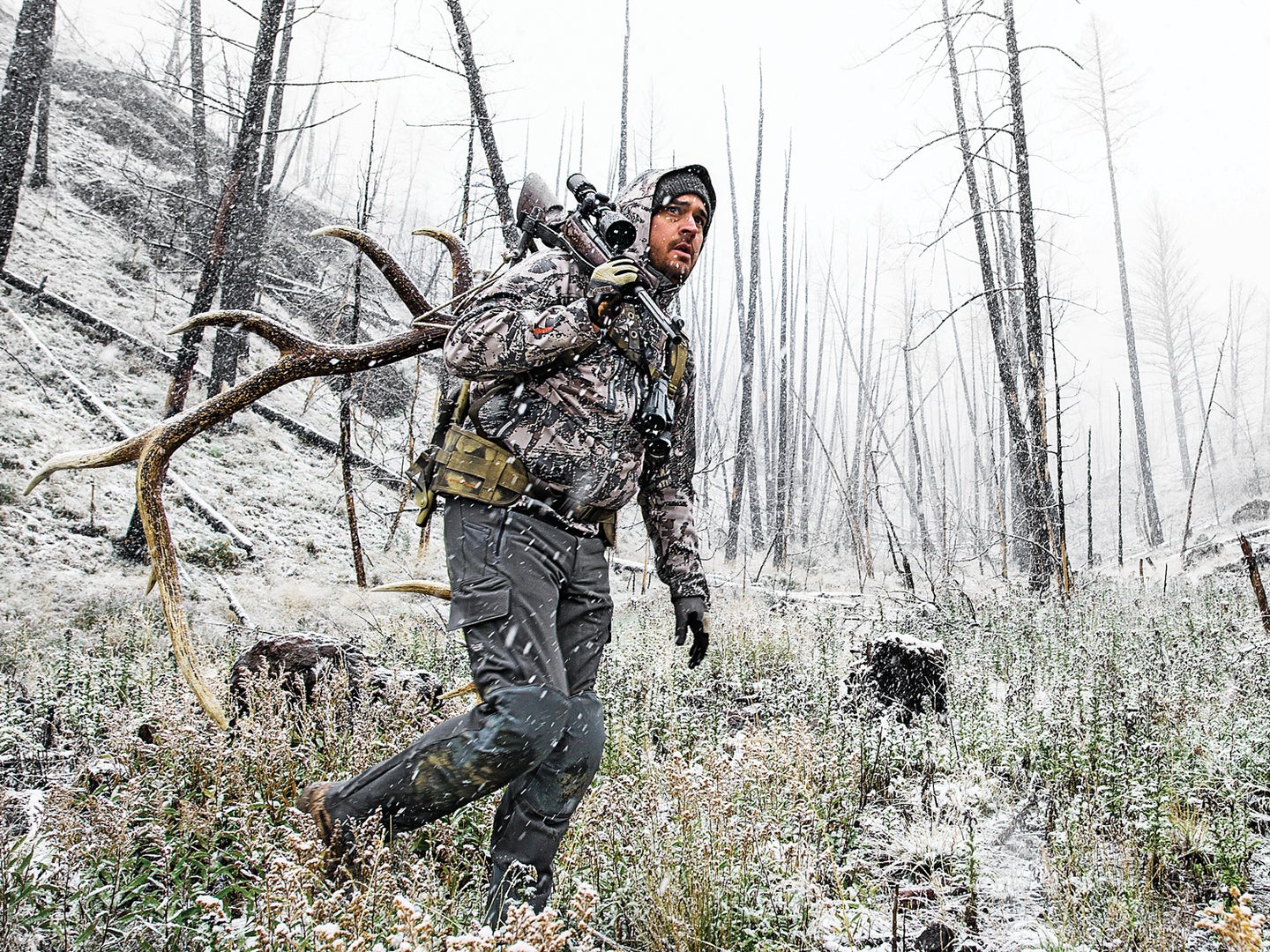 These stories are about toughness. It is altogether fitting and proper that Field & Stream picked this as a topic, because toughness is endangered, and hunting is one of the few fields in which it is fashionable, necessary, and encouraged. Schools and colleges teach the opposite of tough. In these institutions, tough is as unfashionable as English grammar, common sense, and American history as it actually happened. Tough can apply to persons and inanimate objects. It can mean getting yourself into a situation where you are over your head physically and seeing it through rather than quitting. It can apply to an item of gear that refuses to wear out or fail no matter what is done to it or how much it is misused.

A friend of mine, a handgun hunter, went on a sheep hunt in Alaska where no sheep were to be seen. The only way to find them was by walking, and so he walked. He walked until the blood soaked through his socks, and then through his boots. He finally shot his sheep, made it back to camp, and then he could walk no more. He is tough.

I have a rifle scabbard that has gone on who knows how many horseback hunts since I got it in 1977, has endured endless horrific weather and constant abuse by moronic half-ton animals, and could easily do it all over again. That scabbard is tough.

The military, where toughness is still at a premium, can teach us much on the subject. At West Point, the maxim is “Embrace the suck.” This means no matter what kind of wretched situation you find yourself in, it is the wretched situation you have chosen. Everything in your life has led you to this. Enjoy it. Relish it. Savor it. Some toughness is physical, but much is mental. I know a SEAL who made it through Basic Underwater Demolition school, where everyone is made of whalebone and steel springs but the attrition rate is still 80 percent, by adopting the mantra: You’ll have to kill me. I will not quit. I’ve talked with half a dozen SEALs, and to a man they say that what got them through it was resolve, not biceps.

Can tough people complain? In the military, pissing and moaning is practically a duty. For civilians it’s more complex. If you don’t pull your weight in camp, your bitching rights are null and void. If you do your share of work, you may complain, but only if you do it with wit and style. Artful complaining can make a grim situation less so. Mindless whining turns men’s minds to thoughts of slaughter.

Is there a slogan for the tough? Almost. You’ve seen those T‑shirts that say, Keep Calm and Carry On. I would change it to Keep Calm. Carry on. And Shut Up. Read on. And hang tough. —David E. Petzal

A Shotgun’s Last Run in Alaska

Right after college I bought an Ithaca Model 37 Featherlight 12-gauge pump. I killed my first 5 million ducks with that gun. In 2007, I cut the barrel back to 18 inches and took it on an Alaska float trip as my bear gun. For five days, I didn’t eat, poop, or paddle farther than a hand’s reach from that Ithaca. On day six, we flipped our canoe in a hellish river strainer. I barely made it out alive, and I lost my beloved bottom-ejector. It’s still there.

Sometimes I find myself hoping that a spring flood somehow washed it downstream, and that someone stumbled across it, rusted and beaten, thrown up on a gravel bar like driftwood. They’d pick it up and wonder: Holy crap, what happened to the guy who once shouldered this old soldier? —T. Edward Nickens

A Guide Who Could Put Up With Anything

For roughly an hour, at a place I will call Methane Mountain, the hero of this story endured the unendurable.

The event took place on a horseback elk hunt. There were four of us riding up a narrow trail. I was third in line; our hero was fourth, close behind me. My horse was named Trooper, and the trouble began when I heard an unmistakable rumbling in Trooper’s guts. Then it came, with the suddenness of a cannon shot: a fiery flood of flatulence. Maelstroms of methane. Cyclones of sulfur. I expected to hear a thump as our hero fell from the saddle, or for him to shoot Trooper, or me, or both of us. But he didn’t, possibly because of blindness.

Our hero is tougher than a Trump steak, and I’ve told him so, but I still hide from him every year at SHOT Show—even though none of it was my fault. —David E. Petzal

Pound For Pound, The Toughest Game Bird Out There

They’re the chain-smoking altar boys of the upland set. Blue quail look innocent enough, with their decorous plumage and jaunty crest, but they’re outlaws through and through—7 ounces of grit, as tough as the country they inhabit, where everything seems thorned, edged, fanged, or otherwise designed to draw blood. It isn’t that blues are mean, exactly, but it’s clear they take a diabolical glee in treating our dogs and us with contempt. They run like their feet are on fire, flush wild and, as they say in West Texas, “take a lot of killin’.”Once in a while, though, the birds hold for a point; your aim is true. And when your dog places that handsome bundle of feathers in your hand, it surely feels like victory. —Tom Davis

A Dog That’ll Go Through Hell

A stiff, cold gale pushes whitecaps down the long lake and adds gas to the ducks passing by my blind. When I finally connect, the shot just catches the tail of a speeding redhead, sending the wounded drake past the decoys into the rough water.

Before the duck even lands, my young Lab is in the water. A wounded diver is a tough retrieve in calm conditions. On a day like today, it will be nearly impossible. The drake dives, and Dublin swims circles around the spot, then disappears underwater. I’m in the water now, shouting his name. He surfaces, then goes under again, searching for the duck as the waves carry them both into deep water. The third time, he doesn’t reappear. The water tips over the top of my waders; I’m going to have to swim to save him.

Then his big black head pops to the surface. When he turns, I see the bright red head of the duck in his mouth. He paddles past me, ignoring both my outstretched hand and the tears in my eyes. —David Draper

Tough Old Toms That Have Heard it All

Harold Knight and David Hale might never have met if not for the early turkey flocks living in Land Between the Lakes. To say those birds have “heard and seen it all” isn’t hyperbole because a good chunk of “it all” was created there. You must beat the bird and an army of men who’ve grown up with turkey calls in hand. The last tom I killed at LBL came in silently, using the break of a ridge to conceal everything but his fan until the final seconds. He was fooled by a kee kee run I made on a two-reed diaphragm call—undoubtedly one of the few sounds he hadn’t heard much of that spring. I may go a long while before killing another longbeard there, but that’s fine. The tough old birds are also the best ones. —Will Brantley

Read Next: Five of the world’s toughest guides share their gnarliest tales

A 200-pound Tarpon And The Fight of a Lifetime

It was our fourth morning in Costa Rica, an hour into the battle with a tarpon our guide was calling 200 pounds, when I realized for the first time in my life that I was in a fish fight I wasn’t sure I could win. Thirty minutes later, I told another angler on the boat to take the rod—but just before the handoff, I changed my mind and pressed on. My guide, Clifford Ramos, touched the leader six times but couldn’t get control of the 8-footer, and each miss cycled into another agonizing line dump. Just shy of two hours, he managed to get a grip on the lower jaw. I barely had the strength to smile for a photo. I’m still proud of that fish, but I never need to duke it out with a 200-pound tarpon again. —Joe Cermele

Dying of Thirst in a Nameless Place

In that January of 1984, the foot trek had resumed at dawn, trackers leading, then hunters, then bearers, in a 30-man file, four threadbare camels and two horses behind. By midday, somewhere on the baking northeastern savanna of the Central African Republic, the water containers went dry. We tried not to think of thirst, or blistered feet, and walked on, not sure of to where, the sun gliding down the white encasement of the sky without cooling.

Then we found the pocket of green, not on any map. In a hollow that running water had carved in the stream’s rock bed, I soaked in my clothes and boots.”

How old are you?” another hunter asked.

I cupped clear water in my palm, staring at it. “Thirty-two,” I said. “Today.”

We come into the world nameless, at first. It seemed right that this day fell in a place with no name. Not one, at least, it served me to know, at the time. —Thomas McIntyre