Tungsten loads mean hunters can now drop wild birds using small-caliber shotguns. But how far can you ethically shoot? Here’s our test, plus a rundown of the best .410 shotguns for turkey hunting 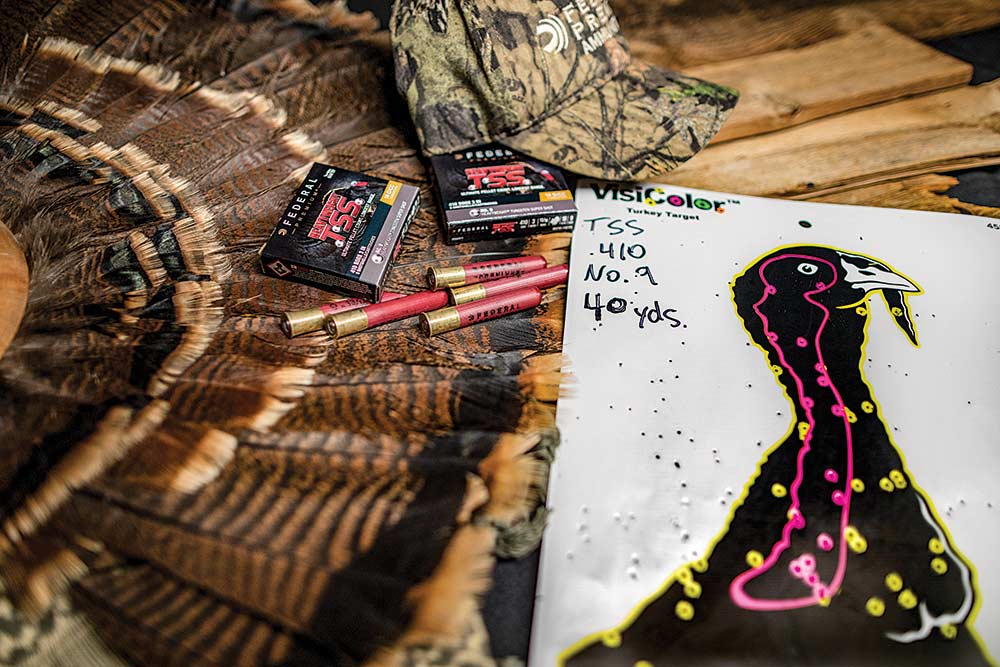 Heretofore hardly enough gun for butterflies, the .410 has became the hot new ­gobbler-​getter. And the credit for that goes to Tungsten Super Shot. Tight-patterning and dense enough that No. 9 shot can make lethal hits at long range, TSS was all the rage as 2018′s turkey seasons opened. Ammo manufacturers Federal and Apex expected to sell plenty of 12- and 20-gauge TSS loads, but they were unprepared for the run on .410s. They sold out fast, leaving a lot of hunters unable to find out what the fuss was about.

The good news: There will be plenty of .410 TSS from Federal and Apex and Browning this spring. And there will be guns for it, too, and possibly even choke tubes. So, if you want to jump on the .410 bandwagon this spring, or if you’re just wondering if .410 turkey guns are a good idea or a stunt, I am here to answer your questions. I had a chance to shoot lots of .410 TSS at the range and in the field. The stuff is for real.

You can kill turkeys with a .410 and lead shot. You can also call them very close and kill them with your breath if it’s bad enough, but that’s no way to fill a gobbler tag. Loaded with any non-TSS shot, the .410 makes an extremely limited turkey gun. After patterning .410 lead, steel, and Hevi-Shot loads, I concluded that even in the best case, 20 yards would be my maximum .410 range.

TSS changes everything. Because the pellets are so dense, even 9 shot makes clean kills, equating to lead 5s in penetration. Going down to 9s allows manufacturers to fit 270 to 295 pellets in a 3-inch .410 hull, leaving room for a tough, full-length shot cup and buffering to protect the bore and improve patterns. What’s more, the hard TSS pellets aren’t prone to deformation like lead.

Read Next: Long Shots at Longbeards: TSS in the Field

I have had a chance to shoot and test three of the most popular dedicated .410 turkey guns: Mossberg’s 500 .410 Turkey pump and a pair of break-action single-shots from Henry and Savage/Stevens. The Mossberg 500 pump I tested had a fixed Full choke, a 26-inch barrel, and Obsession camo. A newer version, the 500 .410 Turkey, comes with an extended turkey choke (see below). The Henry is a nicely made single-shot with screw-in chokes for $448.. The Chinese-made Stevens 301 is the cheapest of the three at just over $200 and comes readiest for the turkey woods, with a camo stock and fore-end, an extended turkey choke, and a base for optics. None are expensive guns, which is a good thing, because you’ll need to cut costs to afford TSS ammo.

On the range, I saw the best results from standard Full-choke constrictions for the .410 (.391 to .396). This is important, because it means that with TSS, you can likely get good performance from Grandpa’s old .410 single-shot hanging over the mantel. In fact, my host on a recent Ohio hunt had already taken several turkeys with Federal TSS in an old break-action, Full-choke single-shot .410.

Of the three turkey-specific guns I shot, the Stevens, with its extended .396 tube, was the clear winner with TSS, punching an incredible 156 hits in a 10-inch circle at 40 yards. The Mossberg, which is around .392, shot the worst patterns, although “worst” is relative; I’d still call it a 30- to 35-yard turkey gun with TSS, which is incredible for a .410. Although the 500’s receiver isn’t drilled and tapped, I was able to mount Aimpoint’s excellent Micro S-1 on the rib, making it even better for the woods.

Making a .410 turkey choke isn’t as easy as just tightening the constriction. It has taken choke makers a little while to figure out the best dimensions, and now makers like Carlson’s and Jeb’s offer XXFull turkey tubes that help .410s shoot even better patterns with TSS.

The bottom line is that a good-­patterning .410 will put 100-plus TSS pellets in a 10-inch circle at 40 yards, making it deadly to turkeys at that distance. This equals or exceeds most 20-​gauges loaded with Long Beard or even Hevi-13. Plus, a .410 is light, handy, and all but recoilless at the bench.

I wouldn’t call hunting turkeys with a .410 and TSS a challenge, because you’re not giving up much of anything. And at $5 or more per TSS shell, shooting turkeys with a .410 is a pay-to-play proposition. Still, where it’s legal (not all states allow .410s or No. 9 shot for turkeys; check regs), it’s a great option for young shooters, recoil-sensitive shooters, new hunters, and anyone who would enjoy taking our biggest gamebird with our smallest gauge.

The Best .410 Shotguns for Turkey Hunting

The small-bore shotgun revolution has been televised—or at least videoed and blasted out over social media. Some years back, some Facebook showmen reaped turkeys with .410 pistols. It was little more than a stunt at the time, given the limited reach of standard .410 shotshells. But thanks to TSS, .410 single shots stuffed behind truck seats have become 40-yard turkey guns.

Gun companies have taken notice, too. There’s now a host of current-production .410 shotguns to consider. So, if like so many hunters these days, you’re itching to shoot a gobbler with a .410, there have never been more options. If not, don’t let emphasis on turkeys turn you away. These little guns are effective and tons of fun for squirrels and bunnies, on the skeet field, and for just plinking around.

Henry introduced their Single Shot .410 in 2017—one in matte-black steel, another in polished brass reminiscent of the classic Golden Boy. The steel model has a heavy-duty pistol grip, while the brass has a slender English-style stock. I’ve been shooting the steel version, and it’s quickly become one of my favorites. There is no manual safety, but the hammer is blocked from contact with the firing pin unless the trigger is pulled. The action won’t open or close when the hammer is cocked. This all makes it quick and easy to operate safely in the field. The 26-inch barrel points well. The gun is not especially light, which to my mind improves the handling. Mine weighs exactly 7 pounds with an added sling. Buttstock to bore, the quality is excellent for the price.

The Single Shot comes with a Full-choke tube and Browning Invector threads. I handloaded TSS No. 7-1/2s for turkeys this year, and no gun patterned it better. If fact, this gun consistently patterns better than any .410 I’ve shot. Whether it’s fed No. 4s and 6s from Winchester, Federal TSS No. 9s, my 7-1/2 turkey handloads, or No. 9 lead handloads for skeet—it seems to shoot everything well, including the gobbler I took with my 7-1/2s last spring. The gun is a joy to carry, shoot, and hunt with. $448 to $576; henryusa.com

If you love the idea of the single-shot Henry for gobblers but aren’t keen on the $500 price tag, this is the .410 for you. Stevens went all in on the .410 turkey-gun idea, and I’ve yet to meet a hunter who’s used it who doesn’t love it. It’s very similar to the Henry, but with a few tuned-up turkey features. The stock is plastic and available in Bottomlands or Obsession. The matte-black receiver has a manual safety and comes with a pic rail for an optic. The front bead is a TruGlo Hi-Viz. It has a 26-inch barrel, which Savage says is designed to optimize the velocity of .410 TSS shells. It comes with one extended Extra-Full Win choke. The 301 Turkey weighs a field-friendly 5 pounds, and the real-world price is under $150. If you want a dedicated .410 for turkeys, there’s really no reason to not buy this gun. $209; savagearms.com

The Mossberg 500, which has long been available in dedicated turkey versions, has taken as many longbeards as just about any shotgun out there—and it now comes in .410 Turkey model. This small-bore has a 24-inch barrel, weighs 6.5 pounds, is available in original Bottomland, and comes with an extended X-Full choke. With a real-world price around $400, the 500 .410 Turkey is a solid option if you want a quick second or third shot. $550; mossberg.com

This .410 Viper G2 Bronze autoloader from Tristar was not designed for kids. With a 14.75-inch length-of-pull and a fit-and-finish aimed at a more discerning eye, it’s a full-blown big-boy small-bore. At 5.8 pounds with a 28-inch barrel, it swings fast, and has become one of my favorite skeet guns. It comes with three Beretta/Benelli Mobil chokes. All of them shoot .410 lead loads very well with a clean 50/50 pattern. It cycled my dad’s light ½-ounce reloads without a hiccup after a break-in period and some Super Lube along the bolt rails. Tristar recommends shooting 20 magnum loads through this gas gun before expecting perfection. It didn’t like our handloads so much right out of the gate, but after two boxes of factory stuff, it cycled them perfectly.

It’s a heck of small-game getter, too. My buddy and custom call maker Rick Reynolds, who uses the gun when chasing rabbits behind beagles through much of the winter, first introduced me to the Viper on a February bunny hunt. It’s his go-to turkey gun now, too. With its bronzed Cerakote receiver and high-grade, high-polish Turkish walnut stock, the Viper isn’t out of place at a high-dollar gun club. But with a real-world price under $600, maybe don’t tell any snobs what you paid for it. $825; tristararms.com

If you’re wan’t more or less the same gun in a dedicated .410 turkey version, the Bronze Turkey is the way to go. $755

Not new but definitely worth mentioning is this classic from Big Green. The Wingmaster .410, as the name implies, is geared for upland with a fixed Modified choke. If knocking down birds with your 20 or 28 has become just too easy, this is a classy and classic option; it’s also a fun choice for rabbits, squirrels, and clays. But if you’re new .410 has to do double duty in the turkey woods, look at the 870 Express and the autoloading Model 1100. The Express .410 has a fixed Full choke and patterns very well with lead and TSS. The Model 1100, until recently the only autoloading .410 on the market, provides more versatility with Rem Chokes. Like the Wingmaster, the 1100 is a beauty—one you’ll want to pass down to the kids or grandkids one day. AT this writing, it’s not clear what models the new owners of Remington will produce going forward, but all of these guns are available on the used market.

The first gun of so many hunters, the H&R Topper single-shot .410 hammer gun was discontinued in 2015. There are still a lot of them around to look for on the used market. Very light and compact, they come with a fixed Full choke that shoots TSS 9s very well. For the dedicated run-and-gun hunter on a budget, you can’t really go wrong here.

Like all Browning guns, the BPS is a high-quality, well-made gun, and that’s not something you can say of every pump these days. Made in every gauge—even 16 from time to time—the BPS has a top safety and bottom ejection and comes in .410 with screw-in chokes in a 26 inch barrel. Once you add an aftermarket choke you will have a fine turkey gun. $829; browning.com

Kauger offers the ultimate turkey hunting handgun with its .410 Tomahawk. A custom-made bolt-action .410, this gun has a two-round detachable magazine, a fine-tuned trigger, a Jeb’s turkey choke, and an optics rail. The Tomahawk shoots 3-inch .410 shells, and the company promises a max range of 30 to 40 yards, which is very impressive for a .410 handgun. No, it ain’t cheap, but it is pretty darn cool. $1298; shopkaugerarms.com