The Best Bucks of September 2020

Six 200-plus inchers, a youth-season slammer, and a father-and-son double 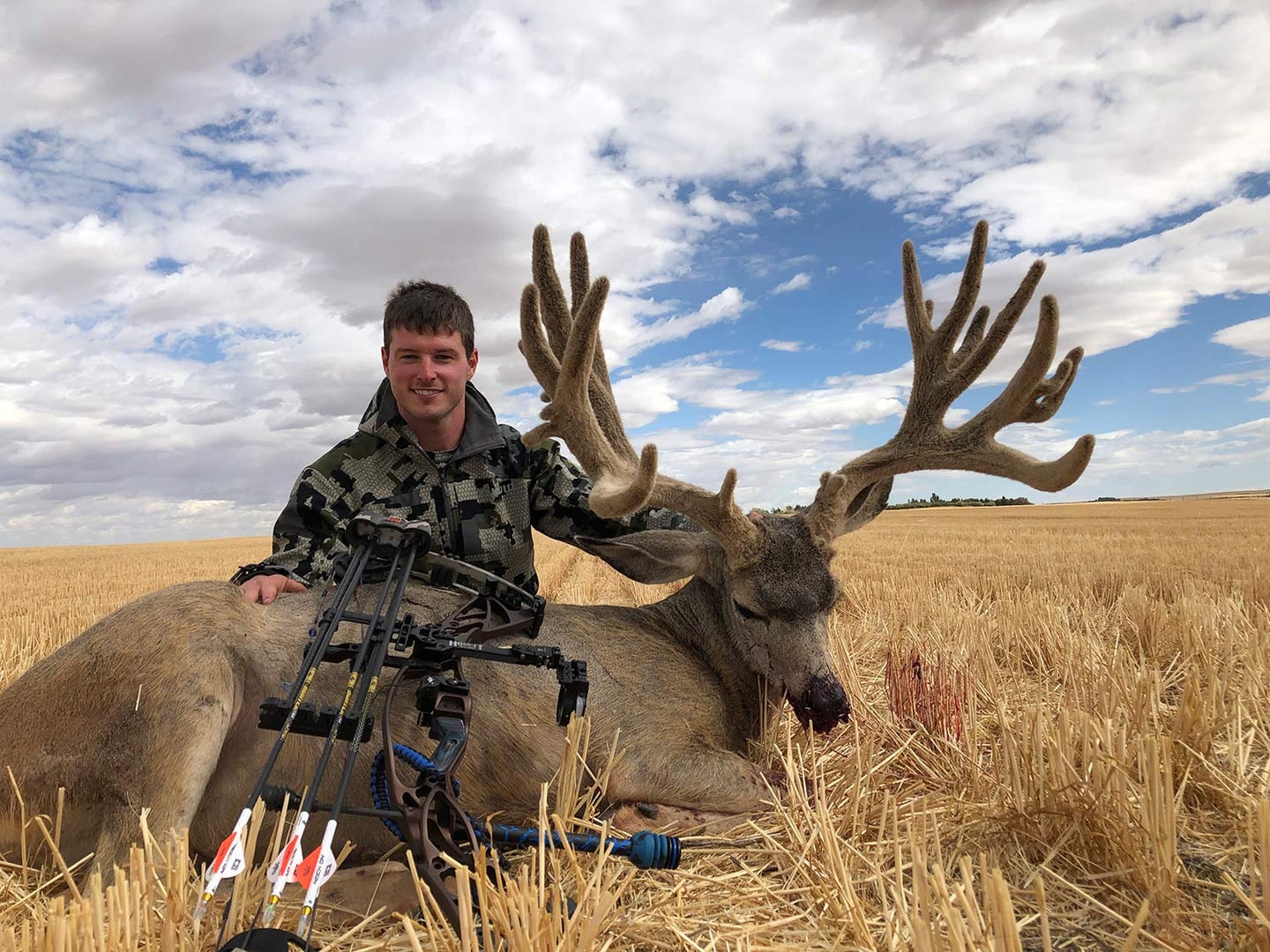 If most states’ gun seasons opened in September instead of November, you’d see more giant deer go down in the early season than you would during the rut. This is a time of year when even the biggest bucks can be very predictable. Of course, most September deer hunters are limited to archery tackle, but that didn’t stop them—plus a handful of muzzleloader and rifle hunters in a few outlier states—from putting some incredible bucks on the ground. Here are the top trophies we’ve tracked down.

Ryan Berran had this buck at point-blank range during the Buckeye State bow season last year. “I knew he was 3-½ years old, and he’d made a big jump from the year before,” he says. “I wondered what he would look like if he had one more year.” Berran found the buck’s sheds last spring, which scored 168 B&C. “This year I literally watched him blow up on camera,” he says. “Every time I checked the cards he was making these amazing jumps in antler growth. By the time the opener came, I figured he’d score around 190. But Berran was wrong, in a good way. This fall, when the giant walked into the same Whitetail Institute clover plot, there was no passing him. Berran shot and the 214-inch whopper crashed within hearing distance. “He snapped off one of his three drop tines,” Berran laments. “We’re still looking for it!”

Saskatchewan bowhunter Nathan Haapala let his 11-year-old brother Liam tag along as he took the field on the morning of September 7. The pair were into big deer right at first light, and several stalks were close but produced no shot. Finally, after more than four hours of careful maneuvering (and one nap by Liam), the two wiggled within 15 yards of a giant velvet buck. Nathan came to full draw and waited for the huge muley to present a shot, but the vitals remained hidden—until Liam made a small coyote bark. The buck turned, Nathan made good on the shot, and the 194-6/8-inch giant collapsed after an 80-yard sprint.

Fort Riley is a Kansas military installation known for producing big whitetails. But one of those brutes was no match for Battalion Tank Master Gunner Michael Pulido, who spotted not one, but two giant bucks while hunting from a treestand in late September. Pulido crawled down from the stand and, using wind and cover, slipped toward the bucks. While that stalk didn’t produce a shot, Pulido felt he had the right game plan. “I came right back to the same area the next day and was actually sneaking up on another great buck when this heavy-racked deer stepped out,” he says. “I recognized him as one of the bucks I’d seen the evening before, and amazingly he stopped right where I needed him to.” The incredible non-typical has 22 scorable points, 7-inch bases, and green grossed 221 B&C.

Iowa’s early youth season is known for producing giants, and Natalie Kesper is no stranger to success there. During her first year of hunting (2018), she killed a 150-inch 10-point—as a 6-year-old. She followed that up with a 134-inch 8-point last year, but saved her biggest showing for this fall. Her 2020 giant has 14 scorable points and green grossed 179-⅜”.

I spoke to her step-dad, Curt Goettsch, of victoryoutdoors.com. “We planned to hunt the same farm where she had success in 2019. It’s a farm with many wooded draws, surrounded by tall native grasses, with an alfalfa field in the middle. At dusk, deer fill the alfalfa field, and Natalie and I can scout this field from about 600 yards away. While scouting, we identified many good bucks, but never the buck she would end up shooting. The wind was in our favor the evening of the hunt, and this true Iowa giant walked into the field upwind of us, just 40 yards away. She made an outstanding shot and is proud to tell everyone she has killed a bigger buck than I have. I couldn’t be happier for her!”

Kansas whitetail nut Sam Voss is no stranger to big deer; he’s killed one 200-inch buck and three over 180. But he knew that a massive, main-frame 8-point that his trail cams found this summer was special. “I also thought he was going to be kind of a slam-dunk, as I had so many pics of him,” Voss admits. “Then, just before the opener, he disappeared. Totally MIA.” Voss went on an aoudad hunt in Texas and came back with no real idea if the big 8 was even around. “But we had a major temperature drop and the wind was right for hunting his area, so I went in there. He showed up at 200 yards, looked my way, and trotted in to 25 yards. Not much of a challenge for a muzzleloader!” The heavy-racked buck sported a 21-inch inside spread, several kickers, great mass, and green grossed 175-4/8 B&C. “He was one of the biggest bodied bucks I’ve ever killed,” Voss says.

Arkansas flies under the radar of many trophy hunters, but bucks like the one shot by Brett Green this month should help change that. “I’ve had my eyes on this buck for three years and finally had a chance to take him on opening day, September 26,” Green says. “I had a younger buck feeding in front of me as light was fading, then I looked up and saw this one coming in to drive him off.” The main frame 10-point grossed 174-⅝.”

Word to big-muley nuts: Head for Saskatchewan. Tanner Neu was hunting that province on opening day, September 1, when he spotted this colossal velvet buck. Using wind and terrain to his advantage, Neu slipped to within 37 yards and made the shot. The non-typical buck green grossed 246 inches, a score that, if it holds up, could place the buck in the Top 25 velvet non-typical mule deer in the P&Y book.

Kaitlyn Berry had this gorgeous buck in her sights last fall, but she chose to pass up the shot. “He was at 57 yards, and I just thought that was too far for me,” she recalls. When the buck disappeared during the rut and didn’t show up again, Berry was certain it had been killed. “We were very surprised when we started getting pictures of him again this past June, and he had added quite a few more points and inches,” she says. “We patterned him throughout the summer and found that his core area was within a large woodlot that is surrounded by cornfields. He frequently traveled from a bedding area along a ridge to an oak flat that acts as a pinch point in the woods.” On the 80-degree afternoon of Ohio’s opening day, Berry took a risk and got aggressive. “I set up on the oak flat that he frequently visited for his first meal of acorns in the evening. He couldn’t have been bedded very far away because he came walking my way before 7pm. I shot him at 30 yards and watched him fall.” The Buckeye State giant sports split brows, 18 scorable points, and green grossed 178.

For the third Saskatchewan monster mule deer, we turn to Darcy Kress (dkressoutdoors). “I’ve dreamed about taking a deer that’s in that ‘next level’…but I’m sure most hunters have,” said Kress in a recent Instagram post. Well, he found just that sort of buck while glassing with his dad this summer, and the pair nicknamed the deer “Ovi”, a buck Kress said “had mass beyond belief and had me shaking every time I saw him.” Finally, on September 13, Kress was able to get on the buck, and after five hours of stalking, arrowed the huge mule deer. No word on this buck’s gross P&Y score, but with over 50-inch of mass measurements, cracking the 200-inch barrier seems like a given.

Canada deserves all the attention it gets for huge mule deer, but Realtree’s David Blanton proved true trophies can be found south of the border, too. Blanton was hunting with westernlandsoutfitters.com when he encountered this 6-½-year-old mountain monarch in Utah. Blanton made good on the shot with a CVA Cascade in 6.5 Creedmoor, and tagged out on a muley estimated at 206 B&C.

They’re not the biggest bucks in this gallery, but how can you argue against a father and his son scoring on a pair of big whitetails on the same hunt? That’s what happened when Whitetail Properties Land Specialist Ben Richardson and his father, Jerry, ventured to Kansas for the state’s early muzzleloader season. “It was opening afternoon and my dad, who we call Daddy J, and I both tagged out!,” says Ben. “Daddy J shot his early, around 3:45 p.m., and I was less than 600 yards away and got the wide 10-pointer around 6:45 PM. It was Daddy J’s first Midwest buck, and we couldn’t be more excited!” Both deer were in the 150 to 155 range. The wide buck has a 21-inch inside spread , while the other had 15 points and was only about 12 inches wide.

Ryan Alexander, who runs Urban Buckeye Outfitters, knew he was on to a once-in-a-lifetime buck when he set himself up for a 19-yard shot on this towering whitetail. According to his Instagram post, “I watched him wobble and fall at 55 yards. Words can’t describe the feeling when you see that perfectly placed arrow!” The Ohio giant had 20 scorable points and grossed 200-4/8.

David Lindsey of thelindseyway.com has hunted Georgia whitetails for some 45 seasons and killed some great bucks. But an ancient warrior he’d nicknamed “Mr. Mumbles” had largely stymied Lindsey’s efforts to tag him. All that changed last month, when the 9-½-year-old buck with double drop tines fed toward Lindsey in a persimmon stand. The multi-year quest, which involved only three sightings, ended when Lindsey made good on the shot. To top things off, Lindsey killed another great buck within a week.

Kentuckian Garrett Ammons may be young, but he’s got a wealth of experience hunting the 100,000-acre-plus Fort Knox military installation. “My dad has been hunting there for over 40 years, so I’ve had a great mentor there,” he says. “I spend a lot of time scouting year-round, looking for good areas and setting things up for fall.” With no food plots or farm fields, knowing natural deer foods is a key to success on the fort, according to Ammons. “We finally had a good spring for acorn production; this buck was the only deer I saw that morning, but it was all I needed to see. He came in eating acorns, and I was able to make a good shot.” Ammons’ tall-racked buck sported 12 points and grossed 171-2/8.