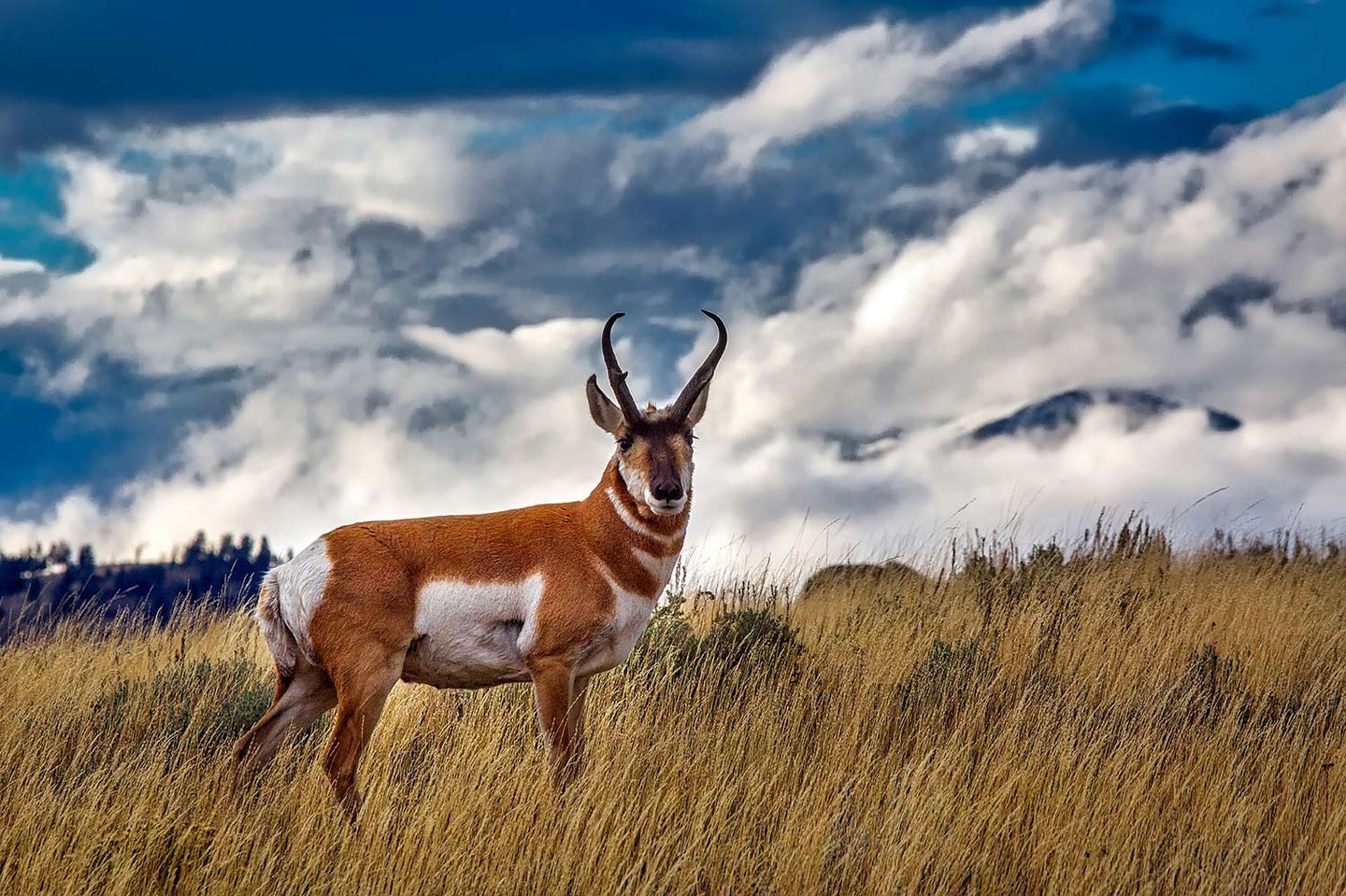 A pronghorn buck scans the prairie for danger. David Mark from Pixabay
SHARE

Creep just a little too close to a pronghorn buck and a few facts will sink in: (1) The American pronghorn has incredible eyesight; (2) it is the fastest mammal in the Western Hemisphere; and (3) you might need to take a long shot.

The pronghorn is the only animal of its kind in North America, so it should come as no surprise that specialized rifles are often used when hunting them. You don’t need a quick-handling carbine; there’s usually plenty of time to set up for a shot. Nor do you want an overly heavy rig, as you’re likely to carry a ways in the pronghorn’s wide-open habitat. What you want is a mid-weight tack-driver that shoots minute of angle (MOA) or better, is chambered for a flat-shooting round, and is well adapted to shooting from intermediate positions, sticks, and bipods.

Here are my picks for the 10 best speed-goat guns, in three different categories—classic, affordable, and new—each paired with cartridges that’ll deal with the distance.

Tagging a pronghorn is not exactly a foregone conclusion, but if you put in some time in a good area, you’ll most likely get your goat, even if you don’t have the latest and greatest rifle and round. For that reason, many hunters like to carry a classic, which can add to the challenge and to the aesthetic.

Prior to 1962, Remington’s flagship bolt-action rifle was the Model 721/722. It was one of the first modern, economically produced sporting rifles. The 721 was for long-action cartridges like the .30/06 Springfield and the 722 was for short-action cartridges like the .257 Roberts, which was designed by gun writer Ned Roberts as a high-performance varmint cartridge but evolved into a fantastic combination varmint-and-light-recoiling-big-game round. The Model 721/722 was ultimately replaced by the famous Model 700, and newer short-action cartridges like the .243 Winchester and more recently the 6.5 Creedmoor have pushed the .257 Roberts into near obsolescence. Still, a whole lot of pronghorns found their way to the great prairie in the sky due to a 722 and the .257. If you like the idea of hunting pronghorn with a true classic, this rifle fits the bill. Used prices start at about $500.

The Winchester Model 70 earned the name “Rifleman’s Rifle,” and the pre-1964 variants are considered true classic American firearms. Lauded by the great gun writers, the Model 70 has taken game all over the world, but it was the release of a new cartridge in 1960 that made it one of the greatest pronghorn rifles of all time. Advertisements for the Model 70 Westerner chambered for the .264 Winchester Magnum proclaimed, “It makes a helluva noise and packs a helluva wallop.” And it did. The western prairies have not been the same since; the Model 70 and the .264 were Creedmoor-cool long before there ever was a Creedmoor. Expect to pay more than two-grand for a specimen in good condition.

In 1985 West Virginia gunsmith Melvin Forbes created the lightest, best-shooting bolt-action rifle ever made. Thirty-five years later, that rifle, unchanged and uncompromised, is still being built by the same man. Assembled on the strongest synthetic rifle stock ever engineered, and built around the flat-shooting and powerful .284 Winchester cartridge, the New Ultra Light Arms (NULA) Model 20 weighs only a shade over 5 pounds and will shoot the cents off a quarter at 300 yards. Both the rifle and cartridge were ahead of their time, and paired together, they’re one of the best pronghorn hunting options money can buy. You’re not giving up any performance with this classic. Used ones sometimes pop up for under $3,000 , but you can still buy this one brand new.

The basic requirements for a pronghorn rifle are flat trajectory and precision out to at least 300 yards. Flat-shooting rifles are not that hard to find but up until the last decade accurate rifles cost most hunters’ a full paycheck. That’s all changed now, as almost every manufacturer offers a low-priced option that nonetheless shoots lights out—many with a sub-MOA guarantee. There are scads of good ones, including the Savage Axis, the Marlin X7, the Weatherby Vanguard, and Ruger American. Here are my top picks for pronghorn hunting.

This sub-7-pound bolt-action comes with a mounted Vortex Crossfire II 3-9x40mm riflescope that has a BDC reticle for flattening out the prairies and carries Vortex’s excellent VIP warranty. The XPR Combo has a synthetic stock, Winchester’s M.O.A. trigger, two-position thumb safety, and a free-floating barrel. The target-crowned, button-rifled barrel and action are finished in a matte blue, and the rifle is offered in 14 different chamberings. Take your choice, but, it being a Winchester, I think .270 Win. seems just right—especially if you’re on a budget and want your pronghorn rifle to also be your general big-game rifle. A center-line feed, detachable magazine that works flawlessly rounds out the package.

If you’re after a rifle that is specifically designed for long-range shooting but you need to spend well under a grand, this is a great choice. The Patriot LR Hunter from Mossberg is the latest model in their fantastic Patriot line of bolt-action rifles. The high comb on the new stock helps the shooter get his eye properly positioned behind a large riflescope while still offering a good check weld. The stock has a flat fore-end, two forward sling swivel studs for bipod attachment, and aluminum bedding pillars—all features distance shooters look for. The detachable box magazine is convenient for getting in and out of hunting vehicles, and pronghorn hunters do a lot of that. The LR Hunter comes with a suppressor-ready threaded barrel and is is available in four goat-getting cartridges. You cannot talk about modern pronghorn rifles without mentioning the 6.5 Creedmoor, and it’s a great choice for this rifle.

When it comes to great hunting rifles, Bergara rifles might be one of thebest kept secrets. Built on the reputation of the excellent Bergara barrelsand the fantastically accurate B-14 HMR rifle, the Bergara B-14 Hunterfeatures a glass-fiber reinforced pillar-bedded polymer stock with asoft-touch coating, and it is available with either a hinged floor plate ora detachable magazine. Depending on caliber and barrel length, the B-14Hunter will weigh between 7.1 and 7.3 pounds, and it is chambered for ninecartridges—ranging from .22 to .30 caliber—that are all excellent forpronghorn hunting. The MOA accuracy guarantee will surely help on theprairie, and the B-14 Hunter seems like the ideal rifle to wrap around the.243 Winchester cartridge. At a little over $800, this may not be thecheapest affordable option, but as well-built as this gun is, you’d be hardpressed to find a better value.

“New” here does not necessarily mean brand-new for 2020. What it means is that the rifles below are new enough that they take full advantage of all the latest precision rifle technology and innovation. That said, I capped the price at $3,500 to keep them within reach for most hunters. These are the best of the best pronghorn rifles, within reason.

Out of the box, the Long-Range Hunter perfectly marries the features of a traditional bolt-action sporting rifle and that of a long-range precision rifle. The stock has an adjustable length of pull, and the receiver is topped with a 20 MOA Picatinny rail that’s attached with #8-40 screws. The rifle features a smooth-pulling LC6 trigger, and it feeds from a three-round AI-style magazine. A radial-port muzzle break makes the 6.5 PRC cartridge recoil like a 6.5 Creedmoor, and the stainless-steel barrel fights corrosion. All in all, this Hawkeye shoots like a precision rifle and carries like a sporting rifle, which is exactly what most speed-goat hunters want.

Big-game hunting with an AR-15 has been somewhat controversial because of the cartridges these rifles are chambered for. The new 6mm ARC changes that; it is the flattest-shooting AR-15 cartridge commercially available, and it will carry 1,000 foot-pounds of energy to 400 yards in a half-second. Given that, the 8-pound Wilson Combat Super Sniper AR-15—which has a billeted upper and lower receiver, a 13.8-inch TRIM rail, tactical trigger unit, Armor-Tuff finish, and dime-splitting accuracy—may well be the best modern, non-traditional pronghorn rifle you can buy.

Boone & Crocket pronghorn bucks get as big as they are by avoid humans. They live deep in, far from any access roads or ranches. To stack the odds in your favor, you need a tack-driving rifle that can reach out, and one that won’t break your back on long hikes. Chambered for the 27 Nosler, which is 400 fps faster than a 270 Winchester, the M48 Long Range Carbon might be a bit of overkill for a prairie goat, but a buck will have to be way the hell out there to be out of range. (It’s also available in 6.5 Creedmoor and 26 Nosler.) The rifle weighs only 7 pounds and has a Timney trigger, a Proof Research carbon-wrapped barrel, and a Manners MCS carbon-fiber stock.

This Weatherby weighs less than 6.5 pounds with a scope and is chambered for a modern version of one of the greatest western prairie cartridges ever created. With its sub-MOA accuracy guarantee, the Mark V Backcountry Ti is another walk-far and reach-way-out-there rifle. It has a TriggerTech trigger, a muzzle break, a 54-degree bolt throw, carbon-fiber stock, titanium receiver, and Cerakote finish. Combine all that with the 6.5 Weatherby RPM (Rebated Precision Magnum) cartridge that’s designed to duplicate the ballistics of the grand old .264 Winchester Magnum, and you have a pronghorn rifle the likes of which Jack O’Connor never dreamed. $3,349