The Best Bucks of December 2019

16 whoppers from last month, including four 200-plus-inchers and a potential state record 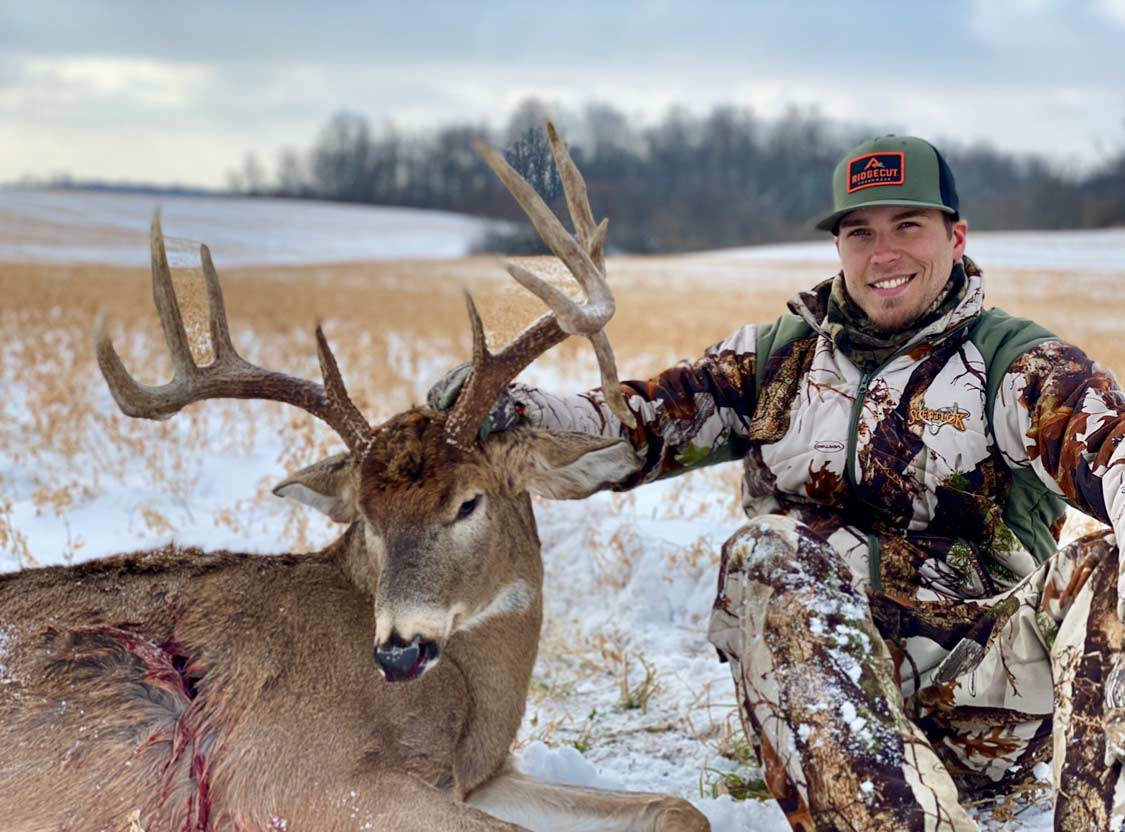 When it comes to putting huge bucks on the ground, December is a decidedly tougher month than November. First off, a fair number of trophies have already been brought to the taxidermist by then. But also, deer spend a lot less time on their feet in the late season, and the ones that did survive the rut and the heart of rifle season are doubly wary for it. In almost every way, the 12th month brings harsher conditions for tagging a monster—but that didn’t stop any of the 16 hunters below, who stuck with it and were rewarded with once-in-a-lifetime deer.

Kolton Ketelson and his father had been chasing a buck they called “High Rise” for four seasons, a campaign that included the young hunter missing the buck with his bow last month. But on the afternoon of December 15th, High Rise ran out of luck. “Dad and I weren’t in the blind an hour before deer started to come out, and we’d been ignoring the area behind the blind because we had a big 8-pointer feeding in front of us,” Ketelson says. “I asked my dad to see if High Rise was behind us, and sure enough he was there, grazing at 30 yards. I poked my dad’s muzzleloader out the window, squeezed the trigger, and made the shot.” Although High Rise had only a 15-1/4-inch spread, he sported 12-1/2-inch G2s, 11-1/2-inch G3s, and 8-1/2 and 6-inch G4s. The buck green-grossed 177-1/4 B&C.

Thane Piatt had two year’s worth of pictures of the Ohio buck he named “Dozer.” “Last year he was a 150-inch 10-point,” says Piatt. “This year he switched it up and was a main-frame 8-point with a 2-inch kicker on his G2 and a 6-1/2-inch drop tine on his right side. I believe Dozer was a 5-½-year-old buck.” Piatt knew that minimal pressure and cold weather would eventually get the buck on his feet in daylight, and that’s exactly what happened when Dozer hit a turnip food plot on the evening of December 17th, giving the hunter a 43-yard shot. “I went in the next morning to find him only 80 yards away,” says Piatt. “Such an awesome buck, and he scored 158-1/8.

Tiny houses are all the rage; maybe it’s time for tiny farms to shine. On December 12, southeast-Minnesota hunter Kristofor Johnson killed this Booner on the 40-acre property he owns with his brothers. While not all bucks make significant jumps in antler growth every year, this one sure had the right stuff. “He was about 130 inches two years ago, and 160-plus last season,” Johnson says. “This year he just got bigger.” Bigger indeed. When Johnson pulled the trigger on the buck during the state’s late muzzleloader season, the main-frame 10 point–which sported multiple stickers and forked G3s—grossed 182 B&C.

Jerren Long is no stranger to big whitetails; he killed a 175-inch buck with his bow last month. But a certain huge buck was giving him fits. “My neighbor saw him from the road two years ago and sent me pics,” Long says. “I hunted him with a bow for two seasons and only saw him one time.” But Long wasn’t giving up. During Iowa’s second shotgun season, he not only laid eyes on the giant, but was close enough to make good on the shot. The long-beamed 5×5 grossed 214-⅛.

We’ve featured bucks killed by Ronnie Strong in this space before, and this year proves that those earlier trophies were no flukes. On December 3rd, Strong arrowed a 5-½-year-old buck that grossed 152 inches. Then on Dec. 6, he made it a twofer, when he tagged a 163-inch buck that was 7-½ years old and had broken off at least 12 inches of antler from a whole bunch of fighting. We look forward to getting more big buck pics from Strong next fall.

More and more of today’s monster bucks seem to come as the result of a multi-year campaign; then there’s the buck Roger Sapper shot during Iowa’s late muzzleloader season last month. Sapper had no clue this buck existed until the monster showed up on his farm as he was scouting during the state’s shotgun season. Sapper filmed the wide-racked giant with his cell phone as the deer walked within gun range. The hunter immediately went out and bought a tag, saw the monster several more times, and then finally sealed the deal with a muzzleloader. The buck green-grossed 212-6/8 B&C.

Pat Reeve spends a ton of time traveling to hunt for his show DrivenTV, but when he’s home in Minnesota, he’s hunting with his kids. “My 14-year-old daughter Isabel shot this mature 5-1/2-year-old on our place on December 1st,” Reeve says. “He was feeding in a standing bean plot, and she made a 120-yard shot. The buck field dressed at 220 pounds, had nine scoreable points, and grossed 145.” Pat’s turn came on December 12 when he shot a 6-½-year-old buck that in previous years would show up only in December and stay long enough for Reeve to find his sheds. “I hadn’t seen him until the night I shot him at 70 yards with my Thompson Center Impact. He’ll gross close to 160.”

Hunting a lease in Webb County, Texas, Barry Weekly and friend Brent Johnson had spotted this 8-½ year old buck on his feet in daylight—a rarity for that deer, particularly from established blinds. On December 10, they set up a pop-up blind in the area. Two days later the wide-racked monster showed up again, and Weekly made good on the shot. The main-frame 10-point had an inside spread of 23 inches and scored 179-⅝ B&C.

Okay, Troy Bryant killed this giant whitetail the last week of November, not in December, but since we just found out about and it’s a potential state-record buck, we’re including it here. Bryant was aware that a huge typical sometimes frequented his family ranch in the Oklahoma sandhills, but the buck was rarely seen. During the rifle season, Bryant was glassing from a vantage point when the buck stood up, pushed a doe from cover, and came close enough for a shot. When word of his trophy spread, neighbors started sharing their sightings and pics from the big-ranging buck. The symetrical whopper green-scored 201-4/8 gross and 193-2/8 net. The current Oklahoma state record typical was taken in 2007 by Jason Boyett, and netted 192-⅝.

Whitetail Properties agent Rustin Hayes knows good deer ground when he sees it, but he was having trouble seeing this Kansas buck. “I got a single trail-cam pic of him during peak rut in November, and I had one encounter with him during the archery season,” he says. “Fortunately, there was some rutting still happening on the opening day of rifle season in December, because I finally caught him, pushing does around in a big grass pasture.” The heavy-racked buck grossed 163-⅞”.

Killing a mature buck in the morning during the late season is no easy task, but Zach Dimmich did just that on Dec. 31 when he caught this gorgeous whitetail heading back to bed. “I was able to get on the backside of the morning movement for the wind,” says Dimmich. “I hunt harder and more carefully at the end of the season than I do on those November days that most of us assume are best.” Dimmich says he’s not sure what the buck scores. “I don’t measure deer that I kill, only shed antlers. He’s a beautiful buck that’s at least 6-½-years old, so feel free to take a guess.”

Identifying a good whitetail at a distance can be a challenge, but Garrett Colglazier had no doubts when he spotted this dandy, thanks to a nearly two-foot inside spread. Colglazier was glassing when dawn broke on the Kansas rifle season. “I spotted his silhouette from over a mile away,” he says. “I had to make a long stalk on him, but the effort was worth it. He’s 22-1/2 inches wide and my widest buck to date.” The best part about the hunt, according to Colglazier, was all the trail-cam pictures that fellow hunters sent him when they found out he’d tagged the buck. “Turns out, ‘Slingshot,’ as we named him, was one heck of a traveler,” he says. “One guy sent me pictures of the buck that were taken more than 3 miles from where I harvested him.”

Jeff Lindsay has appeared in these galleries before (including just last month), and he knows when conditions are right for big-deer movement. “It was the last day of the Kansas rifle season, and a winter storm was going to blow in that night,” Lindsay says. “That weather, and the wind, made for a perfect chance to hunt “Big Lex,” the buck we’d named five days earlier when we first got pics of him. He walked in with only 10 minutes of legal shooting light left. Talk about taking it down to the wire!”

Our friends at Drury Outdoors put us on to this Illinois buck tagged by Chase Sailer after an amazing campaign. Though Sailer knew the monster buck he’d nicknamed “Towers” well, the whitetail was anything but predictable. As the hunter walked toward a bow stand in the fall of 2018, he spotted Towers bedded right under his set. After a long stalk, Sailer crawled within range of the giant, only to have the trigger of his crossbow freeze up. This fall, on November 14, Sailer had Towers chasing does in front of his stand, but the buck ducked and spun at the shot, and Sailer made a non-fatal hit. Towers recovered and was heading back to bed from a feeding session in a bean plot on December 8. This time Sailer had a muzzleloader in his hands and sealed the deal.