Tips for Turning Around a Late-Season Duck Hunt 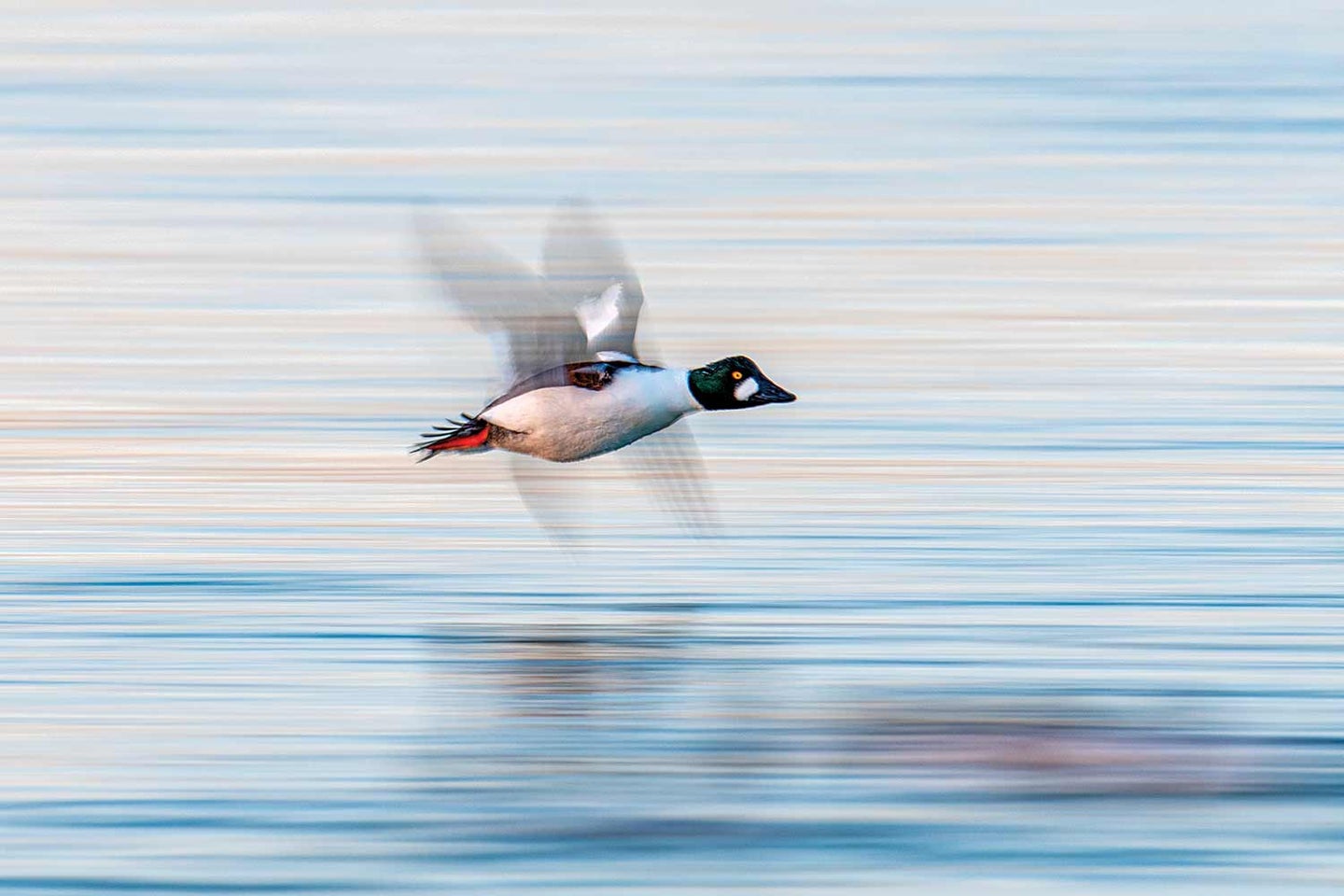 The mallards trading up and down the river swing over the half-frozen pond I’m guarding and look down from a safe height, but that’s all. I know they can’t spot me. I dug the blind into deep, fresh snow at the water’s edge with a bank behind, and I tucked grass into the stubble straps of the hide’s snow cover. I even remembered to wear my white beanie and neck gaiter. I’m like the picture of the polar bear eating vanilla ice cream in a blizzard. There’s nothing to see, save a few inches of gun barrel sticking out of the blind doors. I’ve picked an inertia gun, Browning’s Wicked Wing A5, as the semi-auto in my cabinet most likely to shoot three times, every time, on a cold and snowy day.

The spread is my usual small-­water setup, a C of 18 or so mallard decoys. I’ve added five Canada goose floaters for visibility and because there are geese around. I put them downwind of the ducks because the old-time gunners believed that ducks will fly over geese but geese won’t fly over ducks—and I’m happy to go along with that wisdom.

The ice shelf on the upwind side of the hole is the perfect spot to set a couple of the duck decoys as resters. I wish I’d brought some goose sleeper shells to set there too, but the long hike into the pond—with me dragging my kids’ old plastic sled overloaded with my gun, bag, and blind—was bad enough without them. I’m already not looking forward to the trip out. I’ve been stashing decoys down here all season, but the pond will be frozen solid tomorrow morning, so I’ll have to drag every­thing home today.

Enter the goldeneye. The drake flies right at me, clumsy and clueless compared to the aloof mallards that have avoided me for the past 90 minutes. Among the last ducks to migrate, goldeneyes are a sure sign of the coming freeze-up. They have a reputation for tasting terrible, so I’ve always given them a pass. But I’m tired of rejection, and here is a duck that’s going to let me shoot it. I do, and right away I wish I hadn’t. What am I going to do with it? I’m afraid it will be my albatross on this hunt.

Instead, the goldeneye turns out to be a good omen (and later I find the breast, once trimmed of all the fishy fat, is as tasty as that of any other duck). I hear honking and look up to see geese sweeping over the trees. They’re right on schedule. Geese will look for a loafing spot between 9 and 10 a.m., and that’s what these are doing. They circle and swing wide as if to leave, but they are just giving themselves a longer runway before making a final turn and gliding toward my decoys. A pair leads the rest, and as I sit up, the second goose slides behind the first. One shot bags them both.

Then it’s like a switch is flipped, and the ducks are in a whole new frame of mind. First, a single gadwall pitches in, too far to the side for me to twist around and shoot before it lands. So, I fire my shotgun once in the air to flush the duck, miss once, and drop it over a deep part of the pond. I let the wind carry it to the far bank. As I go to retrieve it, mallards are wheeling overhead, suddenly wanting in. Four geese appear, see me in the open, and slide away. The ducks are spooked, but geese over water can be dumb. It takes only two honks to turn them. They pass right over me, 25 yards up. I point the gun at the leader, decide that fooling them is enough, get my gadwall, and hustle back to the blind.

Soon I’m picking a greenhead out of a bunch of four mallards. As that duck falls, a flock of 20 more veers in. I let the first few light, shoot one of the trailers in the air, then double on one of the birds jumping off the water. In minutes, I’ve gone from what seemed like a sure skunking to one duck shy of a limit.

Read Next: How To Put Together An Unforgettable Late-Season Hunt

I’d like to wait on one more, but I’ve promised to be back and, besides, my gun and the pile of birds already overflow my kids’ tiny sled. That’s one trip out, and I’ll have to make two more. The process turns into a two-hour ordeal. It’s work. But it’s a cheap price to pay to watch my little half-frozen pond turn into the hottest spot along the river on the last water hunt of the season.

Although I often choose an inertia-driven semi-auto for hunting in bad weather, Remington’s V3 has impressed me as a gas gun that shrugs off cold and snow and keeps working. New this year is the Waterfowl Pro version, which dresses up the basic model for harsh conditions. The barrel and receiver are Cerakoted; the safety, bolt handle, and bolt closer are all enlarged to make them easier to use with gloved or numb fingers; and the loading port is milled out for faster reloading. All told, it’s a soft-shooting gas gun that will not fail you, even in the late season.