Why Elk Are My Favorite Big-Game Animals to Hunt

Elk hunting makes you pay. But it gives back much more in return 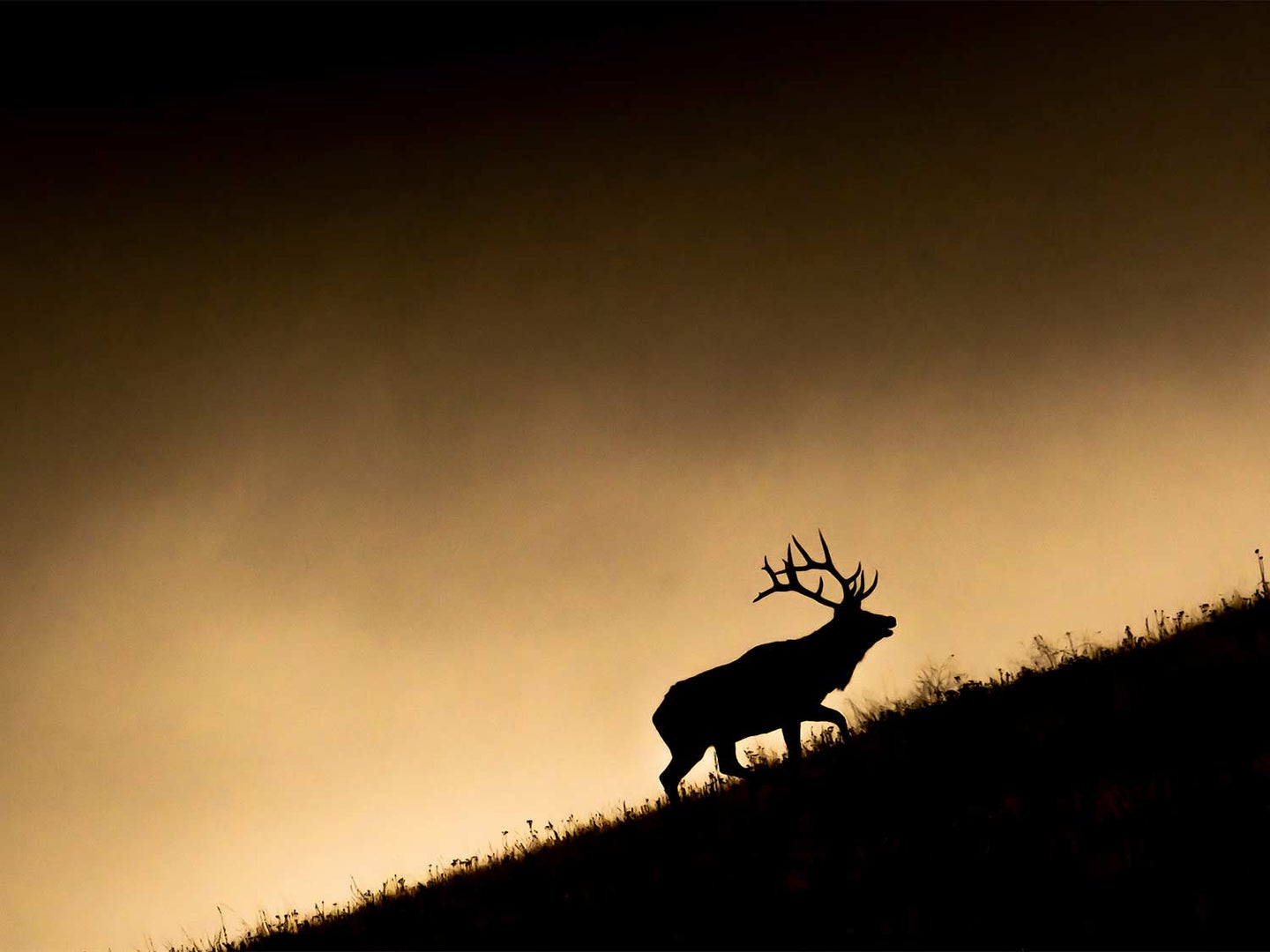 A bull elk climbs toward the high timber in the morning. John Hafner Photograph
SHARE

Perched on my bookcase is a photo of me and the late Norman Strung that was taken in 1973. We are sitting in the sunlight on the deck of his cabin. Prior to this, we had been hunting elk for two solid weeks, making 10 miles a day in the mountains on foot. We never saw so much as a track. On the morning of the 15th day, we looked at each other and said as one, “F**k this. Let’s go sit in the sunshine.” We were both 32, and tough as a pair of boiled owls, but we had climbed enough. This was a typical ending to a typical elk hunt.

I’m often asked what my favorite big-game animal is, and I answer “Elk.” Very early on, I developed such a fascination with the giant deer that, while I could still climb, I foreswore goat and sheep for Cervus canadensis.

Hunting elk is a combination of prodigious effort, bitter disappointment, and, once in a while, success so profound that it goes into your soul and stays there. Everything about the sport is oversized and taken to extremes.

I killed an elk while I lay on neck-deep snow at what was probably 600 yards in the last minute of legal light…on the same day that I was kicked in the face by a horse.

I killed an elk that, gutted, weighed 1,050 pounds on a game biologist’s scale. We were able to get a pickup truck to where he lay, but he was so big he broke the winch, and we had to get another truck with a bigger winch.

I helped pack out a bull of average size that had fallen into a narrow canyon with walls that were straight up and down. The hunter who had shot him and I had to chop a trail to the canyon rim, and then go down into the canyon with pack frames, butchering him, and climbing out hand over hand a chunk of the carcass at a time. After a day of this, we hired three college kids to help, trading elk meat for their muscle. It still took three days to get the animal out of the canyon.

You stand an excellent chance, even hunting in good country, and with a competent guide, of breaking your back for two weeks and never even seeing a track. A friend of mine was on such a hunt. They were in the saddle for so long that some of the hunters’ legs bled through their wool trousers, and the horses got so leg weary they could no longer carry their riders. Sometimes elk simply vanish. They will go not to the next drainage, but three counties away, and all your prayers and sweat will not find them.

The coldest hunting I’ve ever had was for elk, in Montana, 40-odd years ago, when they had real winters. One day, it was 40 below. This was not wind chill but a temperature so cold that if you spit, your saliva would crackle before it hit the ground.

One morning on a horseback hunt in the Bangtail Mountains, it was so cold I found myself praying for the sun to come up. It did, in time, but we had to stop and build a roaring fire before we could continue.

Are there easy elk hunts? Yes. You can drive around a ranch in a pickup, and eventually happen on a semi-tame herd that is hemmed in by barbed wire, but that is not really an elk hunt.

Sometimes, if you put in the effort, the cards will break your way. Fellow gun writer Wayne van Zwoll (who is the best elk hunter I’ve seen at work) and I were on a foot hunt in relatively easy country, when we snuck up on a bull rooting and groveling in a mud wallow.

This was a very, very good bull, and he lurched out of the muck growling and squealing. I started to raise my rifle, and Wayne shook his head.

And as it turned out, his feeling was on the money. The next day, having scarcely broken a sweat, I killed a 6×7 bull that measured 386 Boone and Crockett points, which would have put him in the book.

Luck comes to other people as well. The best bull Norm Strung ever shot was standing in a field of winter wheat, all by himself, and Norm saw him as he was driving home from a hard day in the mountains having seen no elk at all. Norm stopped his truck, got out his rifle, and put the bull on his wall. It was a truly monstrous animal, and he was probably thinking about lady elk when he should have been cultivating his situational awareness.

Things like this hardly ever happen, though. On the other side of the ledger, I hunted hard from 1977 to 1994 and every year I came home aching-kneed and muttering to myself.

Elk are not without a sense of humor. I know of a group of hunters who, years ago, left Washington to hunt in Western Montana in four campers. They took their wives along, and parked in an open field adjacent to a mountain ridge that was home to an elk herd.

Every morning, the men would depart in the dark and begin the climb to where the animals should have been. The elk then snuck down to the campers, where the wives would watch them graze. Then, toward sunset, the herd would sneak around the despairing hunters and head uphill again. None of the wives mentioned what was going on, as they sided with the elk.

I think the whole business was best summed up in a story by Ed Park, which Field & Stream first published in the 1980s, and which you can read on our website. Its title is, “Any Elk is a Good Elk.” That says it all. The first elk I ever killed was a 6-pointer, but he was a poor, spindly-antlered creature that I would not have looked at twice had I been more experienced.

But at the time I thought he was marvelous. I still do.