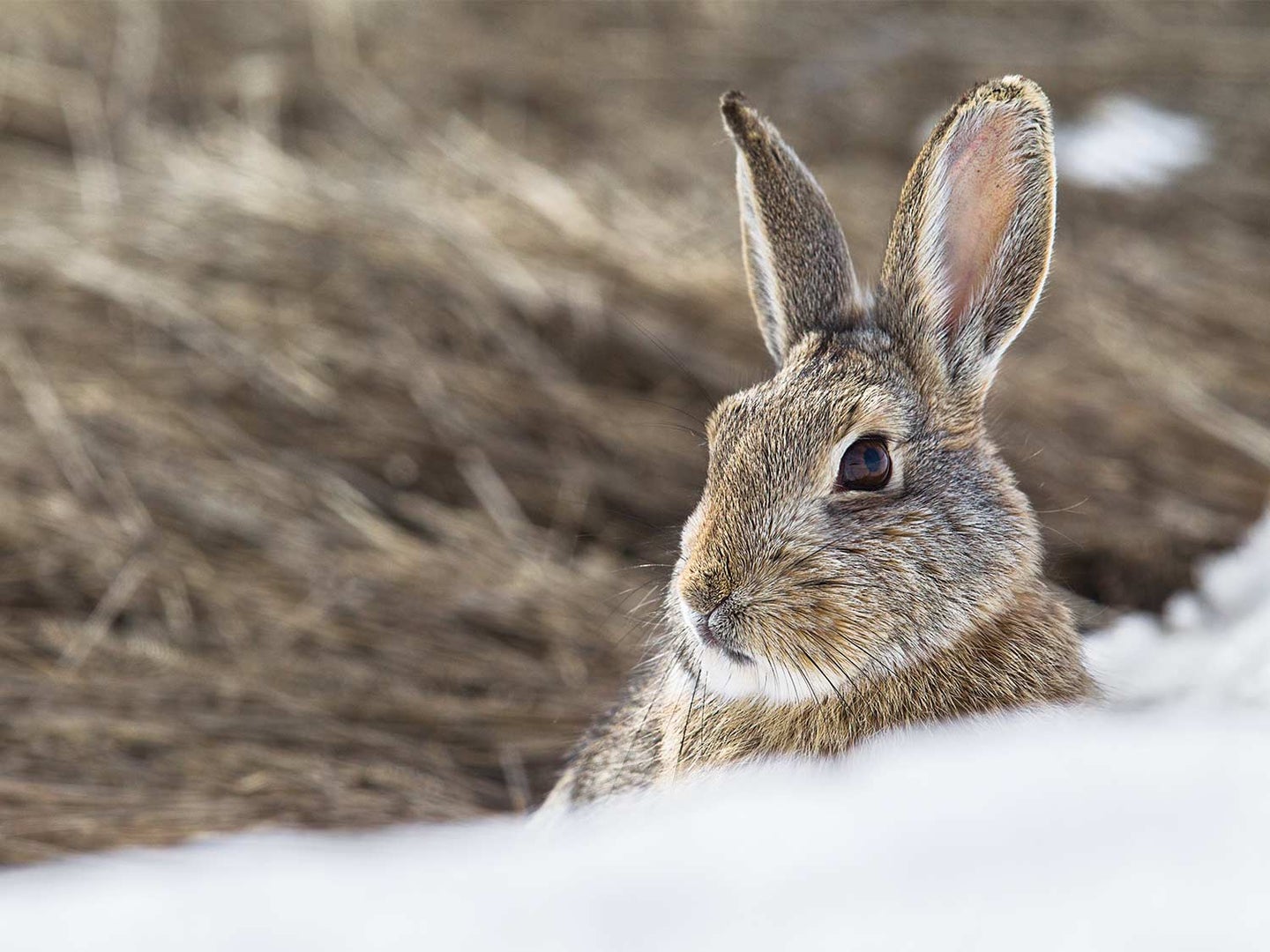 A cottontail is easy to spot against a light blanket of fresh snow. Donald M. Jones

WE DIDN’T SHOOT at the first few that skittered out in front of Al’s points. This was supposed to be a serious late-season quail hunt after all. But a couple of hours into the morning, it became apparent that both quail and quail sign were noticeably absent. And that rabbits were everywhere.

Shaun shot the first one. Alex was his dog, and you don’t shoot game on the ground without the owner’s permission. I’d been holding off, hoping he’d break the ice. Alex yipped with glee when the rabbit tumbled.

A solid-liver German shorthair, Alex was a true Continental pointing dog, bred and trained to hunt birds, waterfowl, fur, and small game, and to follow blood trails. He loved it all, but he only made that special, happy yip when a rabbit rolled in front of him. Although not especially bright, despite his extensive education, Al was smart enough to know what too many of us forget: Rabbit hunting is the most fun.

How to Hunt Rabbits With or Without Dogs

Our quail hunt became a cottontail hunt from that point on, and we couldn’t have picked a better place or day for it. Cropfields divided by overgrown fencelines and interspersed with brushy draws and small woodlots rolled on for thousands of acres around the reservoir. A few evergreen windbreaks still stood where there’d once been farmsteads, before the lake was built.

The rabbits had countless places to hide and thermal cover in the pines and brush, plus their choice of corn, soybeans, bark, and buds to fuel them through the winter. The late-January day was cold but not so bitter as to keep rabbits burrowed up, and an inviting sun drew them to southern exposures.

Best of all, for us anyway, was that the ground was carpeted in snow, which was pocked with tracks and dotted everywhere with little round droppings. Unlike snowshoe hares, cottontails don’t grow a coat of white winter camo. They would rather sit tight than run, a strategy that works very well when they blend into their surroundings, with only the glint of a shiny black eye to give them away. Against a snowy background, cottontails stand out like the words on this page.

Our outing was a mix of rabbit hunting styles. We rolled a few in front of Alex when the shooting was safe. Others we spotted and took with carefully aimed head shots as they crouched motionless, ears flat. Some we flushed ourselves, wading into the brush and stomping, then stomping some more, to dislodge tight-sitting rabbits we suspected were in certain thickets or blowdowns. More often than not, the hunter standing guard outside the thicket was rewarded with the shot, so we took turns busting brush. To be honest, we’d have done better if we’d put Alex back in the truck, so we didn’t have to keep track of him before we shot. Dogs ­aren’t necessary on a hunt like this one, but who could deny Al his fun?

The Best Guns and Loads for Winter Rabbits

Having come geared up for quail, in nylon-faced pants and canvas coats that turned briers and burrs, we were well dressed for rabbits. I carried a Ruger Red Label 20-gauge, the early kind with a blued receiver. Mine had fixed Skeet chokes that were perfect for the close shots the rabbits gave us. Shaun had a 12-gauge Remington 870 Special Field, the straight-gripped model with an ­extra-short barrel and an IC choke. Upland “brush” guns work perfectly on rabbits, and for those who live where upland birds are a memory, the brier patch is one of the last places left to take that lightweight, old, lead-only quail or grouse gun that’s been sitting in the back of the safe.

Had I known it was going to be a rabbit hunt, I might have chosen No. 5 or 6 shot if only to reduce the number of pellets in the meat, but the 7½s we’d brought for quail worked fine. The rabbits reminded us quickly that it’s not so much what you hit them with that matters; it’s hitting them in the first place. A juking cottontail only reaches about 18 mph, but they have the advantage of being earthbound. They can stop, start, and zigzag across the ground in ways no bird in the air ever could, and they can dart behind cover at any time, too. The keys are to keep the muzzle of your shotgun below the rabbit’s line of travel and force yourself to look at the head instead of the conspicuous white tail located at the wrong end.

Or you can do what I did that day, and shoot a lot. The bag limit was 10. We had time, ammunition, and, it seemed, an endless supply of rabbits. So, shooting a limit wasn’t ­going to be a question of if but of when, and how many shells we would have left when we were done. By the time we each had five or six rabbits, though, 10 didn’t seem like such an important number anymore. We had a ton of rabbit meat weighing down our gamebags already, and it was a long walk back to the truck.

“Quit while you’re still having fun” is a hard concept to sell to a German shorthair pointer who loves rabbit hunting more than anything else, especially when, right then, you feel exactly the same way.