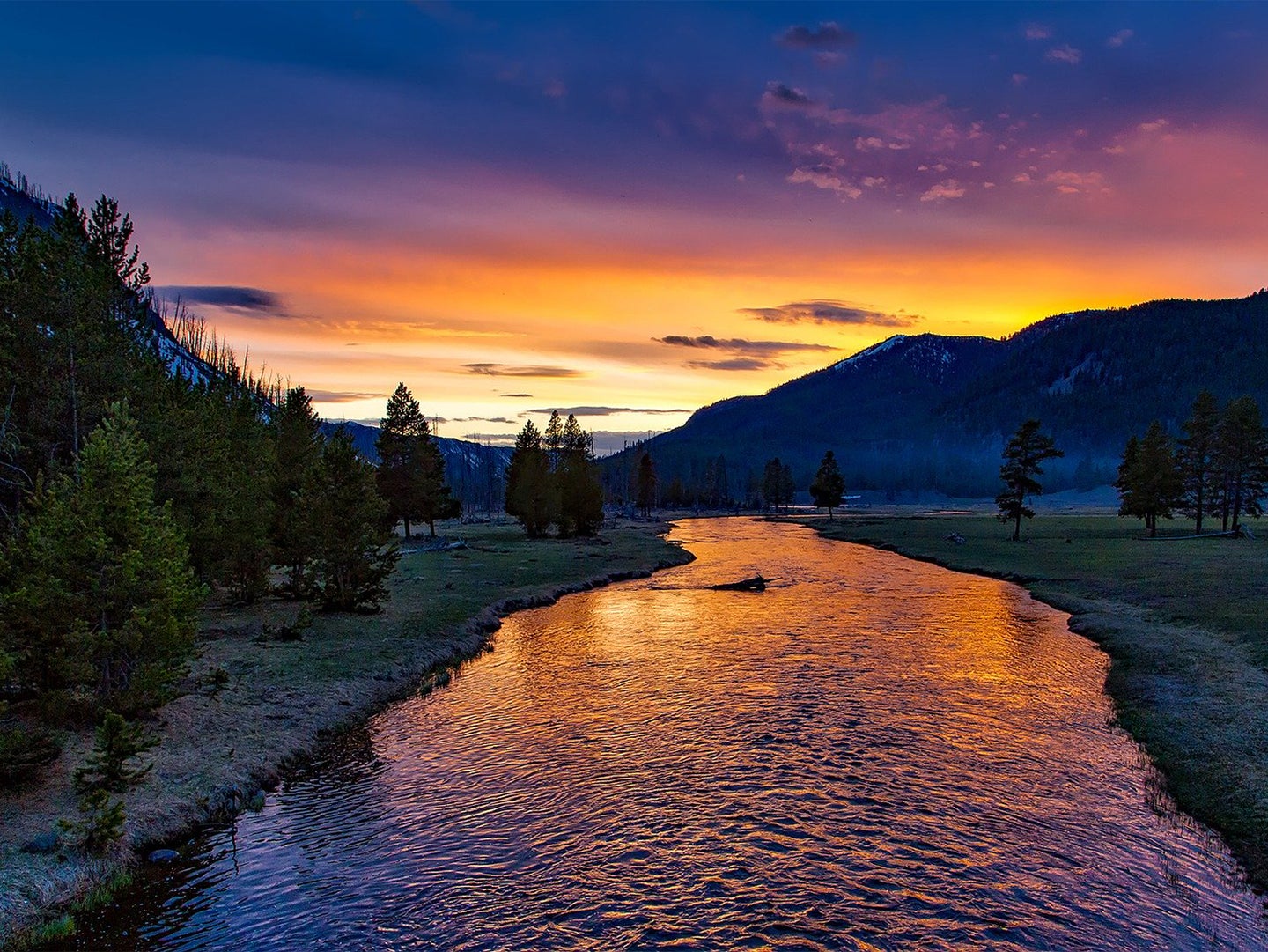 I was headed home from Cody, Wyoming, after a long backpacking trip in the Shoshone National Forest, where a buddy of mine and I had watched bighorn rams at 12,000 feet. We saw 30 along with 40 head of bull elk grazing the alpine meadows in the company of grizzly bears that were oblivious to both us and the elk. It had been a spectacular trip, with good cool-to-cold weather up high. But now, along Interstate 90 through southern Montana, during the last days of July, it was just less than a hundred degrees. My air conditioning doesn’t work (how often do you need air conditioning in Montana?), and feeling the wind coming through the windows was like sitting in a lumber kiln.

Lucky for me, I could do what I usually do when traveling this roaring interstate corridor in the summer. I pulled off at Gray Bear Fishing Access Site, parked, and walked over to lay down in the mighty Yellowstone River. We had a decent snowpack and a cool early summer this year, so the river was running strong and cold, and as I’ve found many times before, it will take you away if you let down your guard for even a second. I stayed close to shore until I was chilled exactly right. I shook off like a dog, got in the truck still soaking wet, and went on my way.

I could have picked from any of the 332 such fishing access sites across Montana, dozens of them on the Yellowstone alone. I could swim, fish, wade, or take the kids for a day of bank-fishing. The freedom to enjoy the rivers and streams here may be the best in the nation. Almost all our fishing access sites were paid for, at least in some part, by the Land and Water Conservation Fund (LWCF), which in this case has more than lived up to its economic-powerhouse value of returning to local communities as much as $4 for every single dollar invested. You can see the economics flowing like the river itself—drift boats towed by big trucks; an inner tube strapped onto the roof of an old Le Sabre; trucks with fly-rod cases mounted to them; people drinking beers and cooking out; guides coming in from a long day of rowing. Sunburns and river sandals and dogs chasing sticks thrown by laughing little kids. Cowboys wading off the day’s heat in cut-off Wranglers, their faces and forearms the color of old bricks. Haying crews, custom combine crews, doctors and lawyers and schoolteachers. A strong and healthy people, having a blast on their own public waters, their own public land, and while they are at it, helping to generate an $887 billion dollar recreational economy that includes 7.6 million jobs.

Every state in the Union has benefitted from the LWCF, with 41,999 projects completed since LWCF’s creation. As anyone reading this probably knows, last week Congress passed, and President Trump signed into law, the Great American Outdoors Act (GAOA). Along with providing funding (taken from royalties on energy production on public lands) to address the ruinous backlog of “deferred maintenance” in our National Park system, the GAOA permanently authorizes the Land and Water Conservation Fund, and guarantees that it will be funded—as Congress intended when it created the LWCF in 1965—at $900 million per year, and that short-sighted or venal politicians will no longer be able to siphon our money off, as they have in years past. The LWCF money—our money—will go to the states where it will produce the biggest bang for each buck.

How the Great American Outdoors Act Was Passed

Much has been made in the media about the remarkable level of bipartisan support that the Great American Outdoors Act has received in Congress, and how President Trump, who reduced two National Monuments at the encouragement of the Utah Congressmen, and who unceremoniously tossed the Waters of the U.S. Rule early in his presidency, signed one of the most monumental outdoors bills in modern history. Some claimed it was all election-year window-dressing for a Republican party that has defined itself by opposing anything to do with clean air, water, wildlife, or public lands for decades now. Cynics point out that all this support for public-land funding is pretty strange from a party whose very platform calls for the sale or transfer to states of many of those same lands.

But that is, well, cynical.

A quick look at who in Congress supported the Great American Outdoors Act (Democrat support for the GAOA in the Senate was unanimous), and who did not will show that not many anti-public lands, anti-environment politicians changed their stripes. There are just fewer of those nowadays, especially in Western states where voters are more closely following issues involving public lands. Montana’s Republican Senator Steve Daines was one of the champions of the Act, as was Colorado’s Senator Cory Gardner. Democratic Senator Joe Manchin of West Virginia, a long-time advocate for the LWCF, was also a crucial and indefatigable supporter of the GAOA.

The 25 Republican Senators who voted against the Act were the usual naysayers—the anti-this and anti-that firebrands, the public land privatizers, the angry zealots, the ideologically constipated, the innovatively moribund. The Utah Republican Congressmen were consistent in their rejection of anything that supports the American public lands, even though Utah, with five of our most spectacular national parks, and some of our most iconic (and most visited) public landscapes, which are the engine of a booming recreational and real estate economy, will certainly be among the states that benefit the most from this legislation. Surprisingly, given the constant outcry from Idaho politicians about the lack of management on federal public lands in that state, Idaho Senators Mike Crapo and Jim Risch voted against the bill, despite findings by the U.S. Parks Service that the bill could create as many as 100,000 new jobs, mostly in the West. A lot of those jobs will be in Idaho. (In the interest of full disclosure, I have one of those jobs, and so do many of my friends.)

The House of Representatives votes were perhaps the better picture of a nation opening its eyes to the value of its lands and waters. Although 104 Republicans voted against the Act, 81 voted for it. Two Democrats voted against it, and 229 voted “yes.” Idaho Republican Representative Mike Simpson was a sponsor of the bill in the House, and Simpson has proven himself as a tireless and pragmatic advocate for Idaho’s outdoorsmen and women.

What those 81 Republican votes for the GAOA mean, as Sen. Steve Daines wrote in his editorial, is that the public lands and waters and the spectacular national parks of the United States are the great unifiers of our people. So is the Land and Water Conservation Fund and the quality of life for all of us that it enables.

After a relentless campaign by everyone from conservationists to veteran’s groups to inform the citizenry about the LWCF, it’s clear that America is leaving behind those in political life who refuse to understand or recognize this, whatever their personal beliefs might be about the value of hunting and fishing or public land.

Why We Need the Great Outdoors—Now More Than Ever

We have all been through an extraordinary time in our history with the COVID-19 pandemic and the many restrictions and impositions we have endured to try and control the disease. Even before anyone had ever heard of coronavirus, recreational use of public lands was booming, as was the economy that use produces. After the virus emerged, Americans, suddenly (and rightly) nervous about tenuous food supply chains, began asking why our meat has to come from so far away, why such a critical piece of our infrastructure and security would be left in the hands of global, often foreign-owned, meat-packing conglomerates. Many found a new interest in hunting, fishing, and gardening to bolster self-sufficiency. Many others relied on friends and neighbors who hunt and fish to show them the way, or share the bounty of the waters and fields with them (New Mexico hunters turned out in droves to help alleviate the food crisis on the Navajo Reservation during the worst of the Covid epidemic there.)

And many of us, faced with social distancing, turned to the original masters of the art—hunters and fishermen and river rats and mountaineers and hikers and swamp wanderers—for relief from the stresses of the time. The result was a whole new focus on America’s outdoors, a whole new appreciation for what we, almost uniquely in the crowded world, have in such abundance. There is a price to pay for such popularity: Campgrounds were (and are) packed; normally silent woods are raucous; and boat ramps are hectic. For those in the business of selling outdoor gear, like my friend and sometimes-adventure partner Kevin Timm of Seek Outside, Inc., the times are almost too busy to truly appreciate.

“My wife Angie and I started a mom-and-pop backpack and tent business and we suddenly find ourselves with almost fifty employees,” Kevin told me. “We are at a place where we are six to eight weeks out on filling orders. We can’t meet the demand.” Kevin said that he and his wife “started a business based on social distancing long before that was even a thing,” building lightweight hunting tents and woodstoves, and lightweight frame packs specifically designed to pack out meat. “We’re American-made, which is part of it,” he said, “but most of it is that, with the Covid problem, we have all reprioritized what we spend our money on and how we spend our time. A lot of people are rediscovering the outdoors.” As to the bipartisan support of the GAOA, and the politics behind that, Kevin says, it is a chicken-or-the-egg question. “I don’t know whether the politics followed that, or not,” he said. “But in Colorado, political leaders don’t want to vote against something that supports the outdoors.”

For me, personally, I’m looking forward to a big October season planting sagebrush and antelope bitterbrush on the Bureau of Land Management lands of southern Idaho, on a co-operative project with the Mule Deer Foundation and Idaho Fish and Game. The crew is ready to go, and we’re looking at a shipment from the nurseries of 185,000 plants this time. We were already fully funded before the passage of the GAOA, but with $1.9 billion per year for the next five years coming to our federal lands and wildlife refuges outside the national parks, I can foresee a kind of renaissance in employment and work for rural communities across the nation—river and stream restorations, tree-planting, timber thinning, habitat improvements, noxious-weed removal, trail work; our people working on our own lands, building a nation we can be proud to pass on to our children and grandchildren.