A longtime F&S illustrator, Kirby took the deer of a lifetime in 2020 on his family farm in Illinois. Below, he tells his story and opens his sketchbook of scenes from the hunt 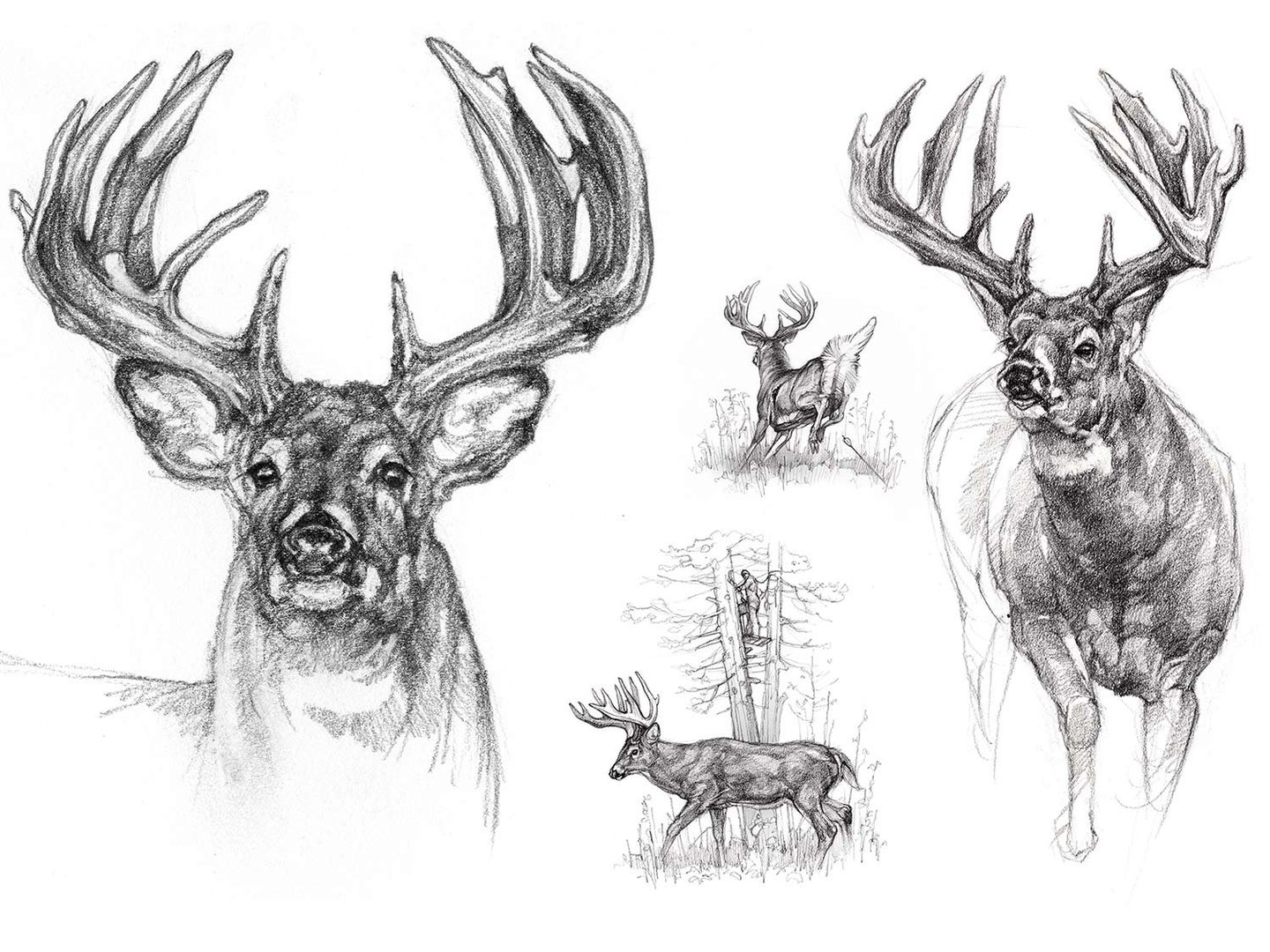 A collection of sketches from Kirby’s hunt. Ryan Kirby
SHARE

It’s not often we do a story on a giant buck and ask the hunter to draw pictures to help tell the tale. But Ryan Kirby shot a 200-inch non-typical whitetail last November with his bow, and Kirby is a guy who can draw a hell of a picture.

One of the most celebrated and sought-after wildlife artists in the country, Kirby hails from Boone, North Carolina, and his illustrations have decorated the pages and the covers of Field & Stream and Outdoor Life many times. If you’ve ever noticed the turkeys on a box of Winchester Longbeard XR or the buck on Deer Season XP, you know his work.

I’d describe Kirby as a distinguished, high-level artist, moving through life to a Travis Tritt soundtrack. One time at a wedding party, a buddy described a teenaged Kirby as: “Sixteen years old, with a Kathy Ireland pinup on the wall of his room, laying on the floor, biting his tongue, holding a pencil, and drawing ducks. Radio on in the background playing, I’m Gonna be Somebody!”

When I run into Kirby, it’s usually at the end of a long day at a tradeshow, when I’ve been mingling with many of the outdoor industry’s highest-level bs-ers. Kirby, always in jeans and a flannel shirt, reminds me that there are still authentic hicks out there with genuine talent. His critter pictures are exciting because he knows what critters in the field actually look like when they’re doing the things that hunters get excited about, like making scrapes or strutting and swinging their snoods about.

As was the case for most of us, Kirby’s 2020 hunting season was different than usual. The Illinois native still hunts family ground, and he has purchased some small tracts nearby, too. “I own a 40, and my dad has a 150,” Kirby says. “Dad started getting pictures of this buck on his place in November of 2019, and once he showed up, he was a regular.”

The Kirbys had 20 or 30 photos of the buck that year, and some close calls in the field, too. “Dad sat in the wrong stand one night, and the deer came out on the other side of the field. He was huge. We had pictures of him through the end of last season, and into the early spring. He held onto his antlers until March.”

Of course, the world changed fast last March, and trips from North Carolina to Illinois to look for shed antlers and work on hunting property became more difficult. Ryan’s wife, Kim, tested positive for COVID-19 in August, when he and his 4-year-old son, Rhett, were planning to make the trip west. They had to quarantine instead. Kim recovered fine, but Ryan didn’t get to put the time in the woods that he normally would have.

Finally, he made it to the family farm and got some treestand time in early November. The big deer was on his mind, but he didn’t have realistic hopes of shooting it. “We didn’t have any recent trail-cam pics of that deer,” Kirby says. “My cousin had a pic of him in velvet, and a few pics of him behind his house, and from his place to where I killed him was a mile apart. I had five cams in the area, but no pics of that buck.”

Kirby hunted his own property the first few nights he was back in Illinois, but with no luck. A couple more buddies were due to join him later in the week, and so he was bouncing around, trying to keep stands fresh. “On November 4th, I hunted a stand called Trump Tower,” he says. It was the day after the 2020 presidential election. “It sits really high up in this cedar, with a waterhole, crops, and bedding cover nearby. It’s like prime real estate, with a pool and a buffet, built by cheap labor. I hunted it on election night in 2016, too, and had a great sit. It’s been named that ever since.”

Kirby says he’s never had much luck blind-calling at deer but after climbing into Trump Tower that evening, he heard a drawn-out grunt, similar to a doe bleat. “I figured I’d rattle a little bit,” he says. “I rattled 20 or 30 seconds, and a little 8-pointer came through. Deeper in the timber, I saw a doe come in to the waterhole for a drink. But that was it for a while—until, right at last light, I heard that grunt again. So I decided to snort-wheeze.”

Kirby says it was getting to prime time in the evening, but that he was already thinking of plans for the following morning when he heard a deer walking toward his stand. “We have bush honeysuckle everywhere up there,” he says. “It started as a landscaping plant. Birds eat it, crap out the seeds, and it grows quick. We cut it up with a chainsaw, but it’s a losing battle keeping up with it. Anyway, the deer was coming through that. It was so thick, I could tell he had a big frame and beams, but nothing else. With no idea what he really was, I made the decision to get my bow and shoot. And he just followed the script.”

Kirby says the buck stopped at 10 yards, and he hit him perfectly. “Soon as I shot, he crashed 30 to 40 yards from my tree, but I couldn’t actually see him,” he says. “I was 99 percent sure he was dead. But my dad came out to help me, and when we got over there, we couldn’t find blood. We were really looking, trying to get a direction, when I saw his main beam light up in the flashlight. I’ll never forget how he looked, laying there.”

Kirby says word got out fast, and neighbors and friends gathered to congratulate him, and see the big deer in person. Plenty of trail-camera photos were shared around, and one neighbor reported running over the buck’s shed with a tractor the previous spring. “We scored him and came up with 202-5/8 the first time, and 200-5/8 the second time,” Kirby says. “Then I used a roll of Trophy Tape I found in my pack, and it ran out at 200 inches with a couple inches of circumference left. I’m gonna go with 200-5/8.”

But the score isn’t the important part of this story. “It feels good to shoot a deer that big, but there wasn’t a crazy story to go with it. I was in the right place at the right time, and having fun. I used to take hunting way too seriously, but anymore, life is stressful enough,” he says. “I don’t have time to make deer hunting stressful, too. When I hunt, I want to be on a break.”

Safe to say, that week was the sort of break every hunter would like to get.