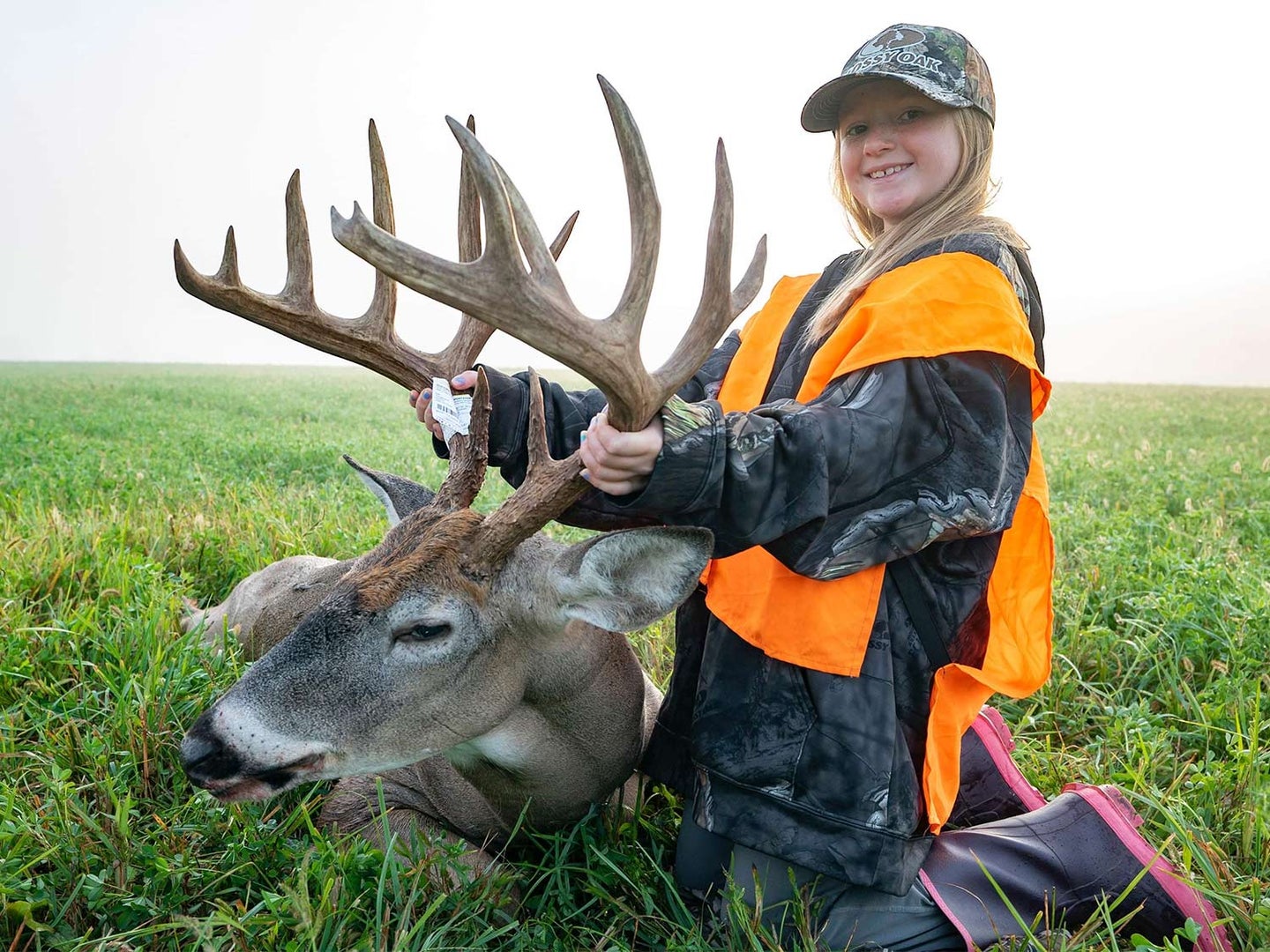 Iowa is a great place to be a young deer hunter. Not only does the Hawkeye State have a healthy whitetail population and more than its share of mature bucks, it also holds a youth deer season in September. Natalie Kesper, step-daughter of Victory Outdoors’ Curt Goettsch, tagged a 179⅜-inch whitetail during this fall’s youth hunt—a whopper of a buck that looks even bigger when the person posing in the picture is only 8 years old. While it’s easy to assume that Natalie’s 2020 buck was a lightning strike, she’s actually been tagging great bucks, and big gobblers, for the last three seasons.

Natalie’s buck from this fall was a bit of a surprise, Goettsch says. “She and I scouted the secluded hayfield we wanted to hunt for the youth season by glassing it from about 600 yards away,” he notes. “While we identified several bucks she said she’d be happy to shoot, we never saw the buck she did kill until we looked at trail-cam pics the morning of her hunt. At 4 a.m., the buck walked right by the blind we wanted to hunt, headed for a bedding area.”

Goettsch wanted Natalie to see how the wind was in their favor for an afternoon hunt, and how important that was when hunting a mature buck. “I showed her on our HuntStand App how we could pick the stand or blind location for the evening, based on wind direction. Since we’ve hunted this field for a few years now, Natalie understands where deer bed and how they enter the field according to the wind. Even then, I was amazed when the buck showed up only 40 yards from our blind.”

Goettsch helped Natalie prepare for the shot. “One of the challenges of helping a small-frame hunter like Natalie is getting her a steady rest,” he says. “We use a BOG DeathGrip shooting tripod, because it’s highly portable and is rock-steady. Natalie made an outstanding shot with her 20-gauge shotgun, and now she’s proud to tell everyone that she’s killed a bigger buck than I have, and I couldn’t be happier for her.”

While Natalie’s 2020 Booner is a special buck, it’s one of three whitetails she has taken in as many Iowa youth-season hunts. And the other two buck are no slouches. “In 2018, when she was 6, Natalie took a beautiful 10-point buck that fall that scored 150-2/8, Goettsch says.

Last year, Natalie shot another great buck, an 9-point that scored 134⅝. Her step-dad says that he’s thrilled with Natalie’s success, but that there’s more to it than results. “I want her to learn the basics in hunting, so that when she hunts later in life, on her own, she can make good decisions,” says Goettsch.

Natalie says that, so far, deer are her favorite animals to hunt, but she’s also had success in the turkey woods. “I like to watch all of the animals, but especially the deer, up close in the fall. I think I like deer hunting a little better than turkey hunting because we hunt afternoons for deer, and I get to sleep in. In the spring we have to get up really early to hunt turkeys. I like turkey hunting, but I like my sleep, too.”

Regardless of the type of hunting, Natalie understands the roots of her passion. “We eat the meat,” she stresses. Goettsch added, “Our family lives on game. We harvest no less than five adult deer every fall, which insures we won’t run out.”

While Natalie has enjoyed every minute of her hunting life so far, she has bigger plans for the years ahead. “She’s an excellent archery shot, and I’m sure she’ll be a very good bowhunter in a few years,” Goettsch says.

“I’d like to go on a bear hunt some day,” Natalie adds. “My step-dad has killed a bear, and I’d like to hunt those too.”