How High-Quality Knife Steel is Made 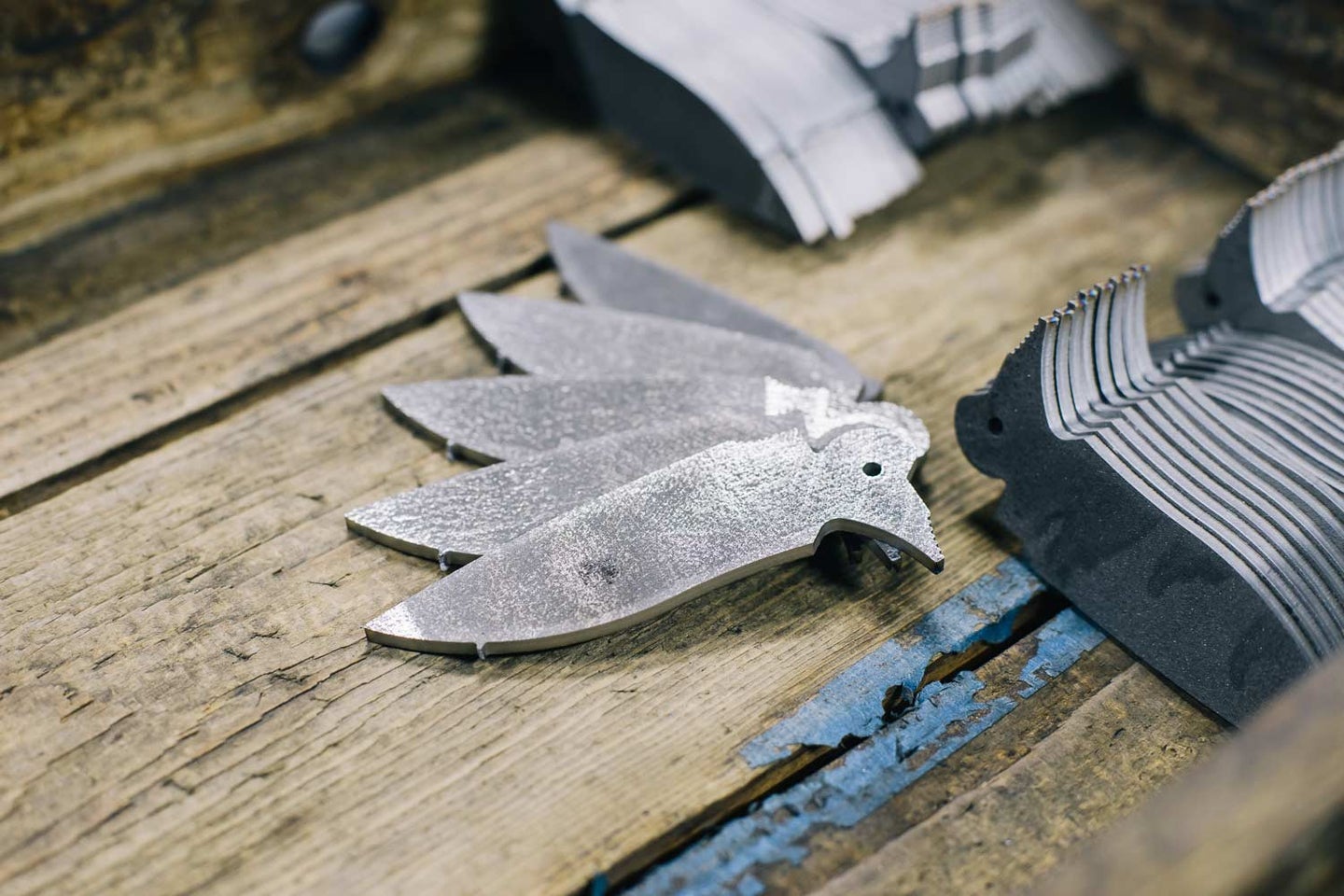 A stack of cut-out knife blanks waiting to be finished. Crucible Industries
SHARE

Steel is an alloy that most of us take for granted. In its simplest form, it is a mix of iron and carbon. But there are a lot of other elements in blade steel that impact the performance of a knife. These elements, added in small amounts, help knives maintain an edge, not rust, and keep from shattering when dropped. To learn more about knife steel, we spoke with Martin Mills, a test and innovation supervisor at Benchmade Knives. Here’s the science on how molten metal becomes a good-quality blade.

Knife Steel Is About Compromise

In a perfect world, a knife would be affordable, stay sharp forever, impervious to corrosion, and tough enough to serve as a crowbar if necessary. However, all blade steels are a compromise of hardness, durability, edge retention, rust resistance, and price. If the steel is too hard, it will hold an edge exceptionally well but be prone to chipping or breaking. If the steel is totally corrosion-proof, it’s probably too soft and won’t hold an edge. Some blade steels offer amazing overall performance but are very expensive.

Each kind of knife steel has its strengths and weaknesses, and it’s important to think about how and where you’ll be using a knife before you buy one. Depending on the application, metallurgists add elements to steel, which can increase performance in different categories. Here are some common elements found in quality knife steel:

Carbon is the primary element that turns iron into steel. Blade steels are often referred to as “high carbon” steel, and as a rule, the hardness will increase as you add more carbon. Carbon also improves tensile strength, wear resistance, and edge retention. You can have too much of a good thing though, and excessive carbon will lead to steel that is brittle.

Adding chromium to steel increases its resistance to corrosion. Steel needs to have at least 13 percent chromium to be classified as “stainless.” As well as being spread throughout the material in its unaltered chemical state, chromium combines with carbon to form particles called carbides (more on that below). Chromium carbides are the softest of all carbides, but they are still harder than steel and their distribution contributes to overall hardness, tensile strength, and edge retention.

Molybdenum, or moly, is used in relatively small quantities. It is another carbide-forming material that increases the toughness of blade steel.

Vanadium forms the hardest carbides found in modern blade steel, and it can have a dramatic effect on the attributes of a knife. These hard, extremely fine grain carbides help increase the wear resistance of the finished blade. Many newer, premium blade steels contain a significant amount of vanadium.

How Carbides are Formed and Why They Matter

The elements above are melted together in a crucible to form an alloy, which becomes the metal that knives are made from. During the process, when they are combined with carbon, they also form small, very hard particles called carbides. Mills explains that these carbides act a lot like the aggregate in concrete—which is mixed with cement to make it stronger. Carbides are harder than the base steel alone, and they contribute to edge retention, blade strength, and durability.

The alloying process affects the types of carbides present in steel while the manufacturing method affects the size, uniformity, and distribution of these carbides—which contributes to the overall quality of the blade steel.

How Knife Steel Alloys are Cast and Manufactured

There are two ways to make knife steel. The traditional or “conventional” method is to put all the elements together with carbon and iron, heat them until they melt and are thoroughly mixed, and pour the mixture into molds to form massive ingots. The cooled mixture is called an alloy, and knife steel has been made this way for hundreds of years.

The only drawback is that the steel cools slowly and unevenly. The elements that make up the alloy solidify at different temperatures, which causes them to separate at a microscopic level. The carbides that form are not consistent in shape or size, or evenly distributed throughout the alloy. This is still the most common method of steel production, and blade steels made this way include 1095, 440 series steels, 154CM, and tool steels like D2.

“The alloying elements are added to the steel and melted just like before, but as the molten liquid stream is poured from the crucible, we blast it with high-pressure gas creating tiny droplets that cool and solidify almost instantly,” Mills says. These cooled droplets become the grains of a metal powder. The same elements found in the alloy of the conventional method are evenly mixed inside each grain, and smaller more uniform carbides form within the grains as well. The metal powder is then put into a chamber where heat and pressure are applied, and it gets fused together to form a solid piece of metal.

The smaller, more evenly distributed carbides significantly improve the finished knife blade. As steel wears away through sharpening and use, carbides are exposed, and they eventually pop out of the steel. Larger carbides formed in the conventional manufacturing process leave large, uneven gaps when they fall out. The uniform carbides from the powdered metal leave smaller gaps, and the ones that remain continue to provide structural support to the steel. This maintains durability and sharpness at the knife’s edge.

Read next: How to Sharpen a Knife to a Razor’s Edge

Now with enough knowledge to be dangerous, let’s look at a few popular blade steels you’re likely to find when looking for a knife in the mid to upper price range. Remember, all knife steels are a compromise, and different manufacturing processes make some blades better than others at certain tasks.

D2 steel doesn’t contain the 13 percent of chromium needed to be considered a true stainless steel so it’s sometimes called a “semi-stainless steel.” From a performance standpoint, it’s tough and has better edge retention than many steels, including 154CM. However, it can’t touch the new powdered-metal steels like S30V for overall blade performance, and it is not the easiest steel to sharpen at home. So why continue to use D2? Because it offers a great price to performance ratio, and it’s durable. A knife made from D2 is an excellent choice for a general-purpose blade that won’t break the bank.

The Benchmade Barage made from 154CM. Benchmade Knives

Introduced in 1972, 154CM was one of the first premium stainless blade steels to hit the market, and it’s still a popular choice. It’s also made by conventional methods, and it has the minimum amount of chromium to still be considered stainless. It also has plenty of carbon.

This steel is similar to 440C (a common stainless steel) but molybdenum is added to increase performance. It has excellent hardness and durability when properly heat treated. It also holds an edge, is more resistant to corrosion than D2, and is easier for the average user to sharpen. Great for an affordable EDC pocket knife or general-purpose hunting knife, 154CM steel will probably not be at the upper end of most manufacturer’s price ranges.

The Spyderco Paramilitary 2 is the perfect example of a high-performance knife using S30V. Spyderco Knives

CPM S30V (also referred to as S30V) is becoming quite common and for good reason. It is a great example of the advantages of powdered-metal manufacturing and has excellent edge retention, good durability, and fantastic corrosion resistance. Vanadium is also added to this steel and the resulting carbides bring extreme hardness to the alloy structure. While knives made from S30V are likely to be more expensive, the increased performance is worth it, and most knife manufacturers will probably start to replace 154CM with S30V in almost every application. It’s perfect for an EDC pocket knife or a fixed-blade hunting knife that can be used for skinning as well as rugged, general-purpose field work.

Read Next: 4 Features to Look for in Your Next Hunting Knife

Using a knife made from S90V is kind of like driving a race car. It’s expensive, tough to maintain, and it isn’t perfect for every application. It takes huge amounts of carbon (almost twice that of D2) and a ridiculous amount of vanadium to create S90V, making it extremely hard and resistant to wear. This steel is manufactured using powdered metal, and it holds an edge in a way that few other knives can.

However, S90V doesn’t come without drawbacks. It is very expensive, and any knife made from S90V is going to be costly. It’s not as rust resistant as 154CM or S30V, and it’s more prone to breaking. That hardness also comes at a price. If an S90V blade gets dull, you’re going to need much more than a bench stone put an edge back on it—think diamonds and even power tools.

How does that relate to real-world performance? Blades made from S90V are great for holding an edge, but they don’t make good rugged, all-purpose knives. S90V knives are awesome for skinning though—where there’s no need to wedge it in between bones or pop joints. Just make sure you have something like a motor-driven Work Sharp nearby to touch up the edge.