The Best New Hunting Ammo for 2021

Get first looks at this year’s hottest new loads for rifles, shotguns, and handguns—including the introduction of a brand-new rifle cartridge, the 6.8 Western 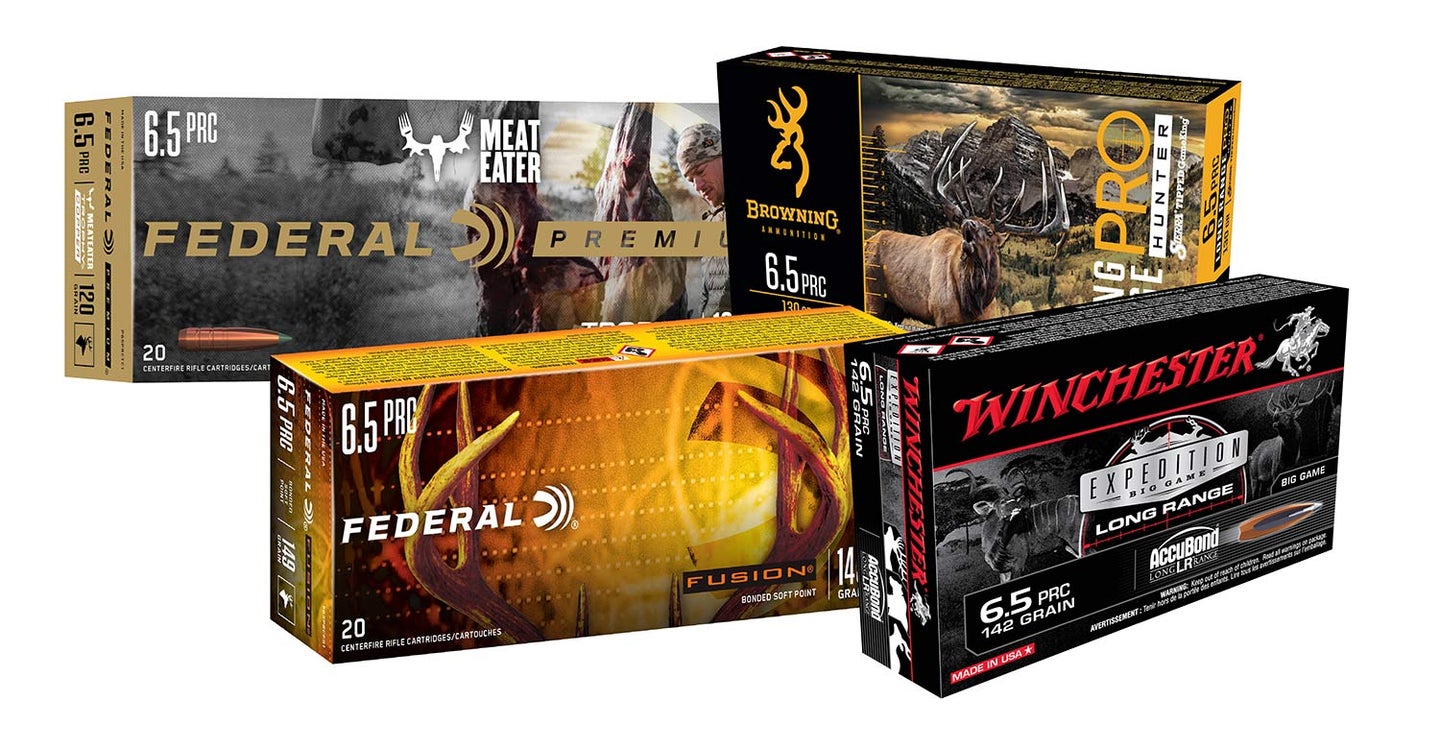 Federal Premium, Browning, and Winchester all have new loads for the 6.5 PRC in 2021. Richard Mann
SHARE

With regard to the best new hunting ammunition, 2021 will be a little different than years past. This is because of an unprecedented demand for ammunition. Companies who load ammunition are backordered to extraordinary levels because shooters—old and new—are purchasing ammunition like never before. As a result, manufacturers have little time to devote to the engineering, testing, and development of new loads. When everything you can make is selling faster than you can make it, it becomes difficult to find the time to create something meaningful and new. Fortunately, the big names in ammunition have not let us down and there are a few noteworthy new hunting loads for 2021. Here’s a collection of the best new hunting ammo of the year.

The biggest surprise for 2021 is the introduction of a new rifle hunting cartridge. Winchester and Browning teamed up, and the result is the 6.8 Western. It is designed for connecting with big game at extended distances, with heavier bullets than can be fired from 6.5mm cartridges. The 6.8 Western utilizes 0.277-caliber bullets that are heavier than those traditionally loaded in the .270 Winchester, and they also have higher ballistic coefficients to deliver flatter trajectories and more energy at distance. The 6.8 Western is essentially a .270 WSM cartridge that has been shortened to permit the use of longer, higher BC bullets, and it has a faster—1-in-8 as opposed to 1-in-10—twist rate. Initial loadings will include a 175-grain Sierra TGK load from Browning and a 165-grain Nosler AccuBond Long Range load from Winchester.

With the recent introduction of new MSR cartridges like the .224 Valkyrie, the 6mm ARC, and even the 350 Legend, it seems hunters are forgetting a great hunting cartridge for the AR-15 that has been around for almost two decades. Well, Winchester—because they apparently really like .277-caliber cartridges—has not forgotten it. For 2021, they are introducing a devilish deer hunting load for the 6.8 SPC that utilizes a 115-grain Extreme Point bullet. No, it’s not a .270 Winchester, but it should reliably handle any whitetail at close to moderate ranges.

Though designed for states now allowing straight-wall cartridges for deer hunting, the 350 Legend has found nationwide acceptance. This is partly because it is ideally adapted to deer hunting and partly because it can be fired from an AR-15. Winchester has two new loads for the 350 Legend for 2021. The first is in the Deer Season line and features a 150-grain Extreme Point bullet, which is designed to deliver wicked wound cavities. The second is actually a self-defense load that uses a 160-grain bonded, protected hollow-point bullet. Both should prove ideal for deer, feral hogs, or bear, out to the maximum practical distance this cartridge should be used.

Read Next: The Best Straight-Walled Cartridges for Deer Hunting

The 6.5 PRC is quickly becoming one of the most popular cartridges for long-range hunting, and for 2021 there are several new loads to choose from. Federal is offering a 149-grain load in their wide-expanding Fusion line, and a 120-grain lead-free load in their Meat Eater Trophy Copper line. In Browning’s Long Range Pro Hunter ammunition line, they now have a 130-grain Sierra Tipped GameKing load. And Winchester is offering a 142-grain Nosler AccuBond Long Range load in their Expedition Long Range line. For all you Creedmoor haters out there, here’s an alternative to your tired old .30-06 that now has quite a few loads to choose from.

Read Next: 10 of the Most Lethal Long-Range Hunting Bullets and Cartridges

One of the most exciting ammunition announcements for 2020 was the HammerDown line from Federal. HammerDown cartridges feature nickel-plated cases with a chamfered rim to ease loading in lever guns, and the bullets have all been specifically tuned to work exceptionally well at lever-gun velocities. For 2021, Federal will be adding three new loads to the HammerDown line. The first is for an age-old deer smacker known as the .35 Remington; it will be loaded with a 200-grain bullet. The second is for the .444 Marlin and it will utilize a 270-grain bullet. And the third is a 250-grain load for the .45 Colt, which can also be expected to perform well in revolvers.

Read Next: The 8 Greatest Lever Guns Ever

Another new load for lever-guns comes from Buffalo Bore Ammunition, and it’s for the .32 Winchester Special, which is a cartridge those from the X, Y, or Z generations have probably never heard of. Though not as old as the .30-30, the .32 Winchester Special was once almost as popular and thought by many to be a better big game cartridge. Buffalo Bore has resurrected it with a 170-grain jacketed flat nose bullet with a muzzle velocity of 2300 fps. It will drive to almost 24 inches in 10% ordnance gelatin and deliver double-diameter expansion. This load is so good you’ll start cruising the used gun counters for an old lever gun in .32.

At the turn of the 21st Century, most would have thought the .410 shotgun was nearly obsolete or, at best, a starter gun for new and younger hunters. Would you have ever thought that serious turkey hunters would be considering a .410? Well now they are and it’s because of some of the technological advancements we’ve seen with shotshells, like this new load from Winchester. It is a 3-inch, 3/4-ounce, .410 load featuring No. 7.5 Diamond Grade shot at 1100 fps. It is designed to deliver extremely tight patterns and to knock the gobbles right off a long beard. No, it might not hit has hard as a 12 gauge, but it will not kick as hard either.

Read Next: Turkey Hunting with a .410

Here’s another new turkey load for 2021. This one’s from Federal, and it’s a new 3-inch Heavyweight TSS load for the 12-gauge, most popular gauge used by turkey hunters. This duplex load is packed with 2 ounces of No. 7 and No. 9 shot, and a FLIGHTCONTROL wad. It has an advertised muzzle velocity of 1150 fps. At almost $70 a box, this stuff is expensive but should hit a big bird with enough oomph to knock a lot of feathers out, which should save you some time when the plucking starts.

Wicked Blend is a collection of purpose-built loads for waterfowl that are made with a lethal combination of premium steel and bismuth shot. The 30-percent bismuth payload is stacked in the wad above the 70-percent steel payload to create a dense pattern that will hit waterfowl harder at extended ranges. There will be four 12-gauge loads and a single 20-gauge load, and they all offer precision round bismuth shot paired with precision round steel shot for the ultimate in pattern density. And all Wicked Blend loads utilize the Browning BXD wad for better performance at extreme distance.

Read Next: 25 of the Best Handguns Ever

Federal Premium has added two new loads to their handgun hunting line of ammunition, and both will be loaded with the highly regarded Swift A-Frame bullet. The first is a 100-grain offering for the .327 Federal Magnum, which is outstanding but often overlooked revolver cartridge that has a lot of potential for hunting deer and feral hog sized game. The other is a 200-grain load for the 10mm, which is a cartridge originally intended for self-defense that becomes more popular for hunting every year. Due to the bonded front section of these bullets and the rear shank that remains intact, both loads should deliver wide expansion and deep penetration.