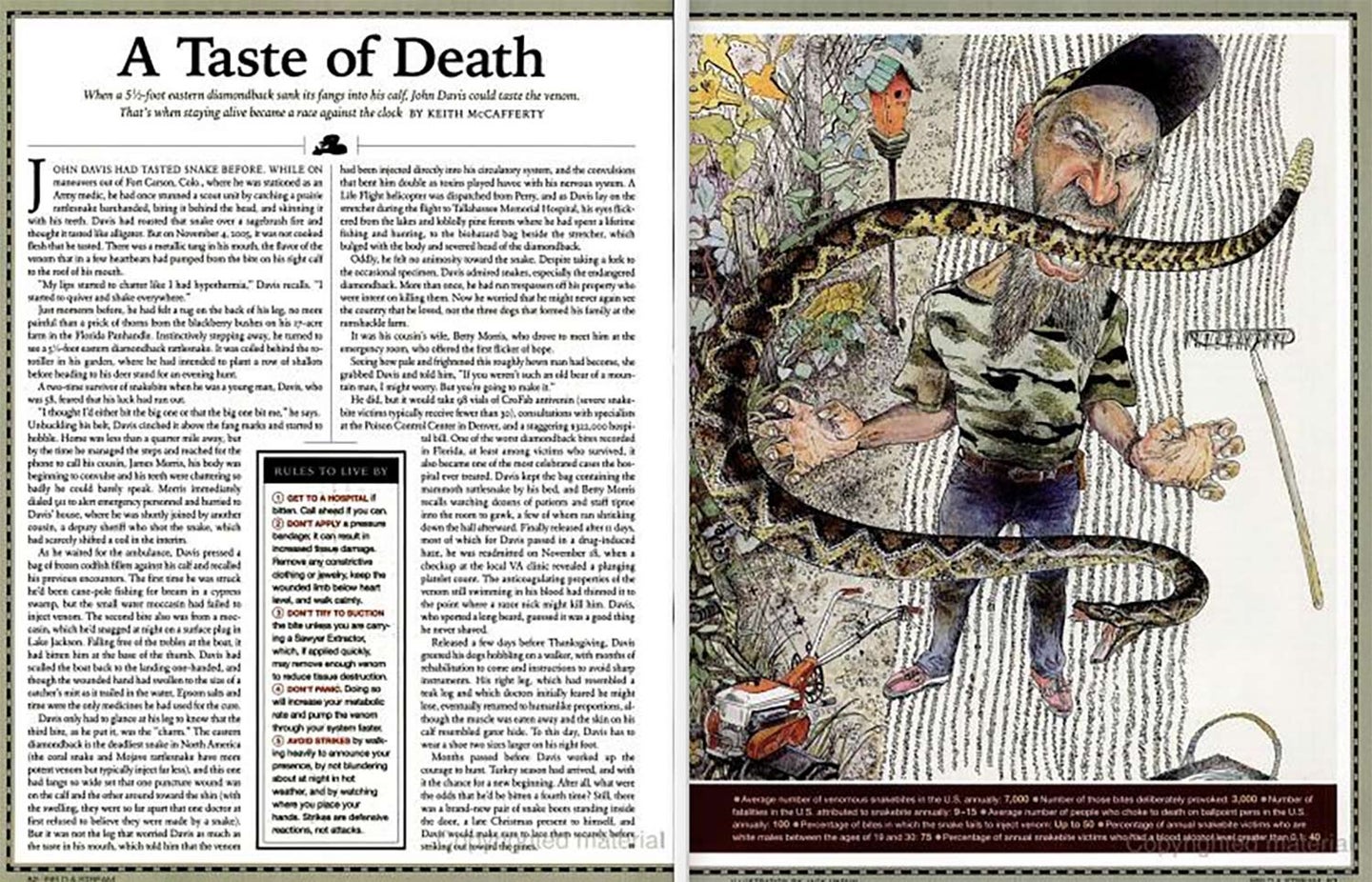 F&S Classics: A Taste of Death

When a 5 ½-foot rattlesnake sunk its fangs into John Davis’s calf, staying alive became a race against the clock

“A Taste of Death” first appeared in the July 2006 issue.

JOHN DAVIS had tasted snake before. While on maneuvers out of Fort Carson, Colo., where he was stationed as an Army medic, he had once stunned a scout unit by catching a prairie rattlesnake barehanded, biting it behind the head, and skinning it with his teeth. Davis had roasted that snake over a sagebrush fire and thought it tasted like alligator. But on November 4, 2005, it was not cooked flesh that he tasted. There was a metallic tang in his mouth, the flavor of the venom that in a few heartbeats had pumped from the bite on his right calf to the roof of his mouth.

“My lips started to chatter like I had hypothermia,” Davis recalls. “I started to quiver and shake everywhere.”

Just moments before, he had felt a tug on the back of his leg, no more painful than a prick of thorns from the blackberry bushes on his 17-acre farm in the Florida Panhandle. Instinctively stepping away, he turned to see a 5 ½-foot eastern diamondback rattlesnake. It was coiled behind the rototiller in his garden, where he had intended to plant a row of shallots before heading to his deer stand for an evening hunt.

A two-time survivor of snakebite when he was a young man, Davis, who was 58. feared that his luck had run out.

“I thought I’d either bit the big one or that the big one bit me,” he says. Unbuckling his belt, Davis cinched it above the fang marks and started to hobble. Home was less than a quarter mile away, but by the time he managed the steps and reached for the phone to call his cousin, James Morris, his body was beginning to convulse and his teeth were chattering so badly he could barely speak. Morris immediately dialed 911 to alert emergency personnel and hurried to Davis’ house, where he was shortly joined by another cousin, a deputy sheriff who shot the snake, which had scarcely shifted a coil in the interim.

As he waited for the ambulance, Davis pressed a bag of frozen codfish fillets against his calf and recalled his previous encounters. The first time he was struck he’d been cane-pole fishing for bream in a cypress swamp, but the small water moccasin had failed to inject venom. The second bite also was from a moccasin, which he’d snagged at night on a surface plug in Lake Jackson. Falling free of the trebles at the boat, it had bitten him at the base of the thumb. Davis had sculled the boat back to the landing one-handed, and though the wounded hand had swollen to the size of a catcher’s mitt as it trailed in the water, Epsom salts and time were the only medicines he had used for the cure.

Davis only had to glance at his leg to know that the third bite, as he put it was the “charm.” The eastern diamondback is the deadliest snake in North America (the coral snake and Mojave rattlesnake have more potent venom but typically inject far less), and this one had fangs so wide set that one puncture wound was on the calf and the other around toward the shin (with the swelling, they were so far apart that one doctor at first refused to believe they were made by a snake). But it was not the leg that worried Davis as much as the taste in his mouth, which told him that the venom had been injected directly into his circulatory system, and the convulsions that bent him double as toxins played havoc with his nervous system. A Life Flight helicopter was dispatched from Perry, and as Davis lay on the Stretcher during the flight to Tallahassee Memorial Hospital, his eyes flickered from the lakes and loblolly pine forests where he had spent a lifetime fishing and hunting, to the biohazard bag beside the stretcher, which bulged with the body and severed head of the diamondback.

Oddly, he felt no animosity toward the snake. Despite taking a fork to the occasional specimen, Davis admired snakes, especially the endangered diamondback. More than once, he had run trespassers off his property who were intent on killing them. Now he worried that he might never again see the country that he loved, nor the three dogs that formed his family at the ramshackle farm

It was his cousin’s wife, Berry Morris, who drove to meet him at the emergency room, who offered the first flicker of hope.

Seeing how pale and frightened this roughly hewn man had become, she grabbed Davis and told him, “If you weren’t such an old bear of a mountain man, I might worry. But you’re going to make it.”

He did, but it would take 98 vials of Cro Fab antivenin (severe snakebite victims typically receive fewer than 30). Consultations with specialists at the Poison Control Center in Denver, and a staggering 3322.00 hospital bill. One of the worst diamondback bites recorded in Florida, at least among victims who survived, it also became one of the most celebrated cases the hospital ever treated. Davis kept the bag containing the mammoth rattlesnake by his bed, and Betty Morris recalls watching dozens of patients and staff tiptoe into the room to gawk, a few of whom ran shrieking down the hall afterward. Finally released after I days. most of which for Davis passed in a drug-induced haze, he was readmitted on November 18, when a checkup at the local VA clinic revealed a plunging platelet count. The anticoagulating properties of the venom still swimming in his blood had thinned it to the point where a razor nick might kill him. Davis, who sported a long beard, guessed it was a good thing he never shaved.

Released a few days before Thanksgiving, Davis greeted his dogs hobbling on a walker, with months of rehabilitation to come and instructions to avoid sharp instruments. His right leg, which had resembled a teak log and which doctors initially feared he might lose, eventually returned to humanlike proportions, although the muscle was eaten away and the skin on his calf resembled gator hide. To this day. Davis has to wear a shoe two sizes larger on his right foot.

Months passed before Davis worked up the courage to hunt. Turkey season had arrived, and with it the chance for a new beginning. After all, what were the odds that he’d be bitten a fourth time? Still, there was a brand-new pair of snake boots standing inside the door, a late Christmas present to himself, and Davis would make sure to lace them securely before striking out toward the pines.