F&S Classics: Mauled by a Grizzly

When the bear gets you, there’s only one hope—play dead and pray 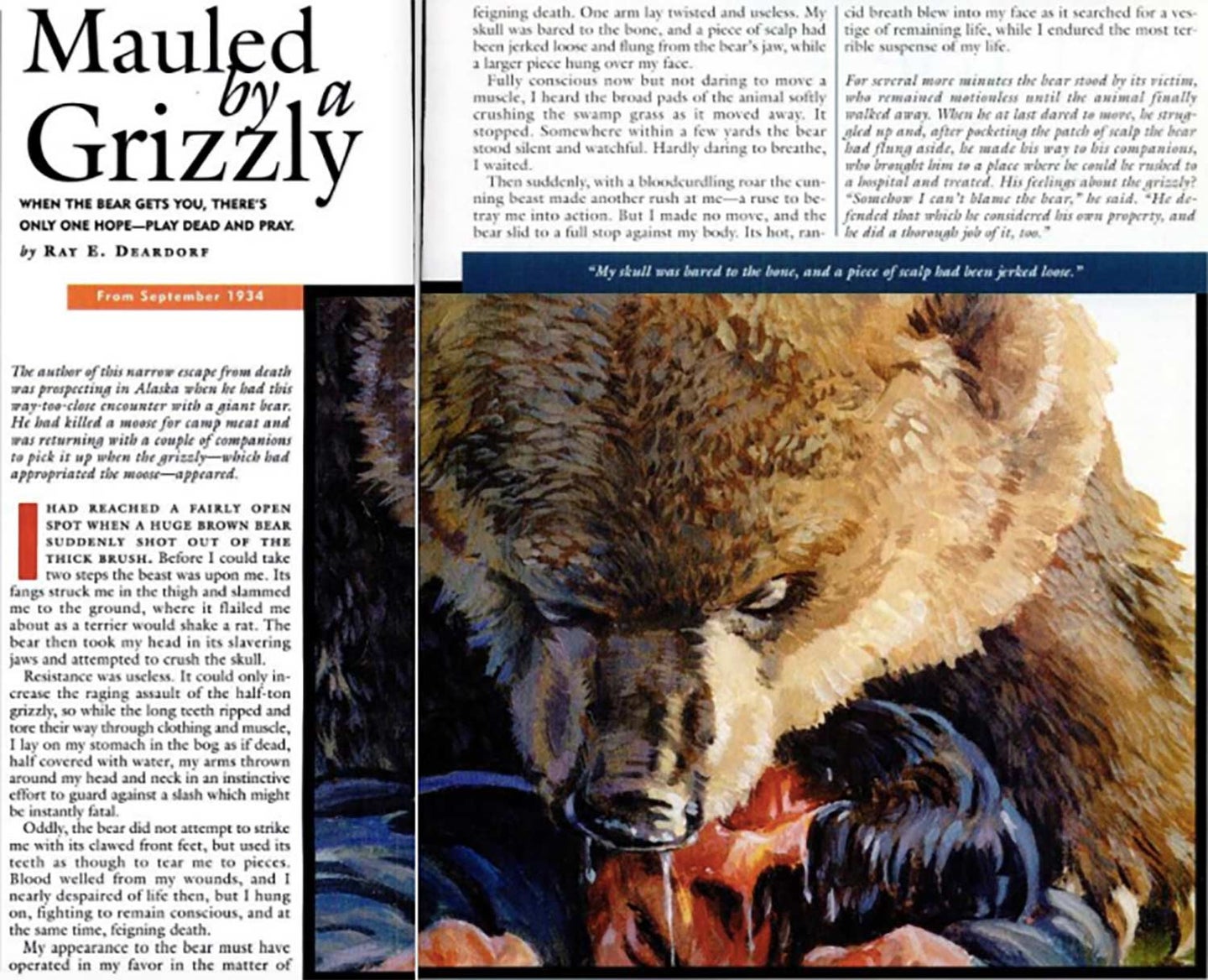 This story was reprinted, along with other classic tales, in January 1999. Field & Stream
SHARE

To celebrate the 125th anniversary of Field & Stream, we’re going to share some of our favorite stories from the history of the magazine. Every day for the rest of the year, we’ll republish a new F&S Classic on the website. Today’s entry, “Mauled by a Grizzly” by Ray E. Deardorf, was first published in September 1934. This story might not be very long—but there is more than enough gore and pain. You can find the complete F&S Classics series here.

The author of this narrow escape from death was prospecting in Alaska when he had this-way-too-close encounter with a giant hear. He had killed moose for camp meat and was returning with a couple of companions to pick it up when the grizzly—which had appropriated the moose—appeared.

I had reached a fairly open spot when a huge bear suddenly shot out of the thick brush. Before I could take two steps the beast was upon me. Its fangs struck me in the thigh and slammed me to the ground, where it flailed me about as a terrier would shake a rat. The bear then took my head in its slavering jaws and attempted to crush the skull.

Resistance was useless. It could only increase the raging assault of the half-ton grizzly, so while the long teeth ripped and tore their way through clothing and muscle, I lay on my stomach in the bog, as if dead, half cowered with water, my arms thrown around my head and neck in an instinctive effort to guard against a slash which might be instantly fatal.

Oddly, the bear did not attempt to strike me with its clawed front feet, but used its teeth as though to tear me to pieces. Blood welled from my wounds, and I nearly despaired of life then, but I hung on, fighting to remain conscious, and at the same time, feigning death.

My appearance to the bear must have operated in my favor in the matter of feigning death. One arm lay twisted and useless. My skull was bared to the bone, and a piece of scalp had been jerked loose and flung from the bear’s jaw, while a larger piece hung over my face.

Fully conscious now but not daring to move a muscle, I heard the broad pads of the animal softly crushing the swamp grass as it moved away. It stopped. Somewhere within a few yards the bear stood silent and watchful. Hardly daring to breathe, I waited.

Then suddenly, with a bloodcurdling roar the cunning beast made another rush at me—a ruse to betray me into action. But I made no move, and the bear slid to a full stop against my body. Its hot, rancid breath blew into my face as it searched for a vestige of remaining life, while I endured the most terrible suspense of my life.

For several more minutes the bear stood by its victim, who remained motionless until the animal finally walked away. When he at last dared to move, he struggled up and, after pocketing the patch of scalp the bear had flung aside, he made his way to his companions, who brought him to a place where he could be rushed to a hospital and treated. His feelings about the grizzly? “Somehow I can’t blame the bear,” he said. “He defended that which he considered his own property, and he did a thorough job of it, too.”