The Hunter’s Guide to Animal Poop

Scat, crap, droppings, or s&%! No matter what you call it, here’s how to identify 11 kinds of animal poop 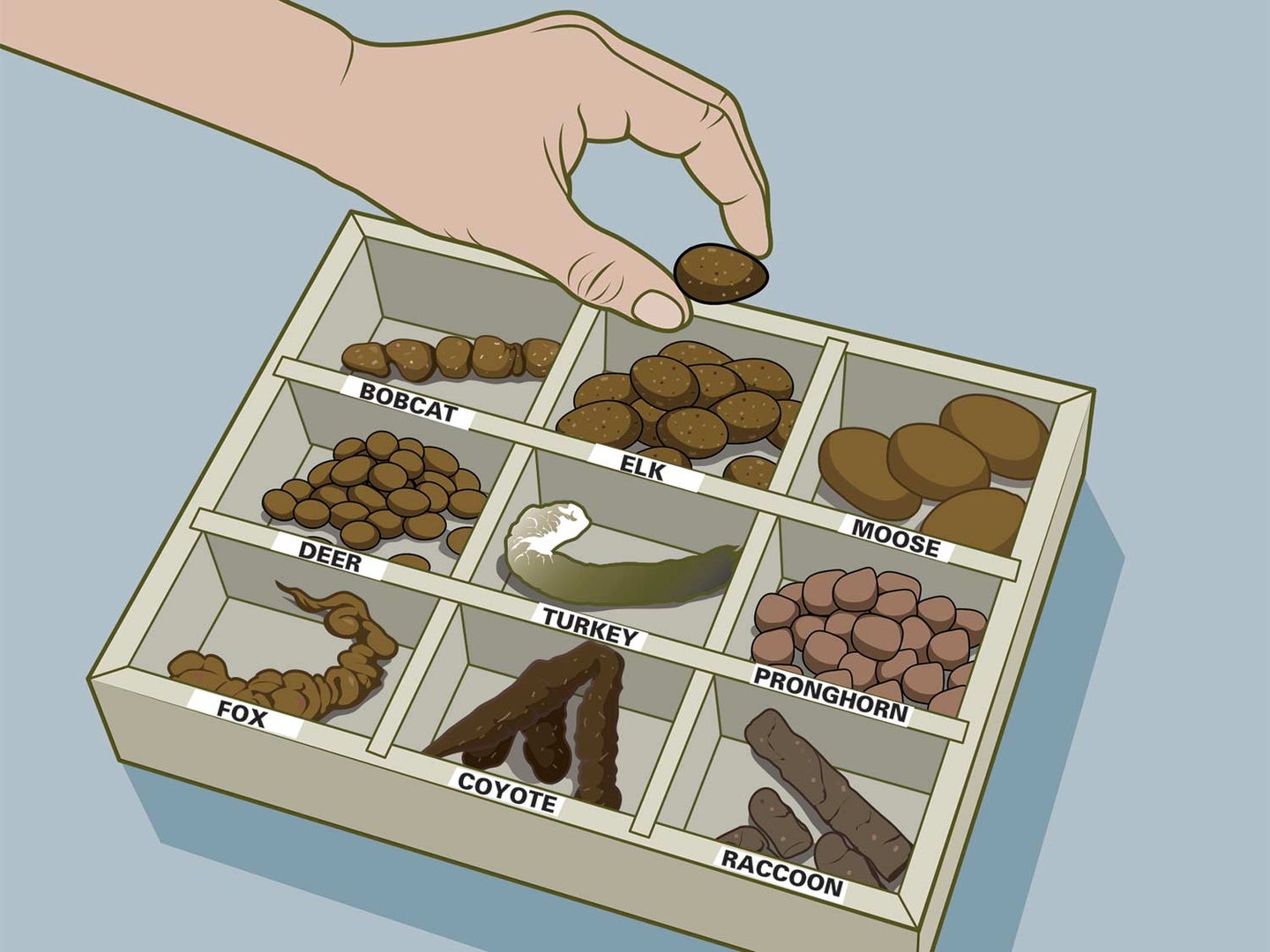 A lot of things will lie to you in your life, but not poop. Close examination of animal scat will help you identify not only the species but how recently the animal was there, its sex, what it ate, even where it might be going. There are a lot of hunters who don’t know scat about animal poop. Don’t be one of them.

Below is everything you should know (and possibly more than you want to know) about how to identify animal poop from 11 different species, and what each do-do can tell you. So grab a stick, and let’s poke some poo.

Coyotes are like kids who want to show you their scat. They leave it in the middle of roads, at trail crossings, and other prominent spots. It’s a way of communicating with other coyotes, both within their pack and to intruders. Coyotes leave tubular scat with tapered ends, often an inch in diameter. In areas that have both wolves and coyotes, it can be difficult to distinguish between the two. This is because coyotes leave big poop for their size and their poop varies greatly. In winter, they tend to be darker, with more fur and bone fragments mixed in. The ingestion of fur often leads to twisted, rope-like droppings. In summer, when they eat more vegetable matter, scat is often lighter and brighter as a result of berries and fruit in the diet.

Foxes once lived chiefly in rural areas. But, like so many of us, they have also adapted to urban areas. Typically, their droppings are about two to three inches long with pointed ends. They can range in color from light tan to dark brown. Their diet in rural areas consists of small birds and mammals for long periods of the year, resulting in scat that is long, twisted, and contains bits of bone and fur. In urban areas, where they consume more birdseed, bread, and a lot of MacDonald’s products, their feces look more like those of a small dog. It should be noted that almost nothing in the wild smells as bad as smeared fox poop. Fox droppings pose a number of health risks. You shouldn’t chew, handle, or inhale them. This holds true for most animal poop—and, really, poop in general.

Raccoons range even more widely than foxes and are as common as deflated Mylar balloons. They tend to poop in raccoon “latrines,” using the same area over long periods of time. In the wild, they like the bases of trees, tree forks, or raised areas such as fallen trees. Some experts say that poop on large tree limbs or logs is “definitive” of the critter, but I wouldn’t go that far.

Scat ranges from black to reddish, a function of their omnivorous ways. It also may be bleached to white. The poop is often granular-looking, segmented, tube-shaped, and 2 to 3 inches long. It breaks easily when disturbed. It somewhat resembles dog poop, except it contains more undigested food, like seeds and hair. According to Paula Smith, who is familiar with all kinds of poop, Raccoon droppings are “radioactive.” She may be referring to the fact that it may contain parasitic roundworms and their eggs. If accidentally inhaled, roundworm infections can lead to irreversible brain, heart, or eye damage.

Deer scat (whitetail or muley) looks like the proverbial Raisinette—oval in shape, pellet-like, ½ to ⅝ inches in diameter, dark brown or black in color (usually), and scattered in piles. It may also be found clumped together when their summer and fall diet consists of high-moisture foods such as berries, apples, and other succulent plants. Their winter scat is lighter in color and tends to be hard, consisting mainly of woody fibers. Semi-round, individual droppings often indicate deer are concentrating their feeding efforts on browse such as leaves, bark, and mast-producing nut trees like acorns. Those long, lumpy droppings that make you uncomfortable because they resemble pinecones—and may make you imagine what squeezing out a pine cone would feel like—are the result of deer eating fruit-producing mast trees, grasses, clover, alfalfa, and the like. They probably don’t hurt at all. Generally, shiny droppings have a high moisture content and are recent. Deer poop piles are proportional. Big ones indicate big deer and vice versa. If you find large, shiny piles in heavy cover, you’re probably near a good buck’s bedding area. Hunt accordingly.

The Shawnee name for elk is “wapiti,” which means “white rump,” and it’s the name preferred by scientists because red deer in Europe are commonly referred to as elk. If deer leave Raisinettes, elk leave chocolate-covered almonds. (Do not eat these either.) Like that of other ungulates, the scat generally takes the form of pellets during winter, when the diet consists of woody browse. But even in summer, when elk consume fresh grasses and the poop may look similar to cow pies, closer inspection reveals traces of the pellet-like structure. Generally, cow elk droppings are tapered on both ends, whereas bull elk poop is more dimpled or concave on one end. Big bulls tend to leave droppings in large clumps.

Think runty Raisinettes and ones that are a bit more oval in shape than those of deer. Also, pronghorn have no dewclaws. Mature pronghorn bucks often scent mark with urine and scat in a ritualistic manner, known as SPUD (Sniff-Paw-Urinate-Defecate). They sniff the ground—often choosing a small plant—then scrape the spot with their front hooves to deposit scent from the interdigital glands. Then pronghorn will urinate and defecate in the slight depression. So if you find small droppings in a spot scraped bare, it’s likely a pronghorn. In the distance, you may see a pronghorn whose expression seems to say, “You really think you’re gonna kill me just because you found where I pooped?”

Large elk and small moose leave roughly similar droppings, about an inch long and ⅝ inch in diameter. These are classic fall and winter moose pellets, the kind shown on tee shirts and made into moose earrings and necklaces. Nobody makes jewelry out of summer moose poop, when they’re eating fresh growth and their scat, overloaded with juices from a moist diet, is much looser. In spring in Alaska, many alarmed people call the Alaska Department of Fish and Game to report that there are grizzly bear droppings in their yards. They do not know that at this time, moose may leave behind wet patties that resemble those of brown bears.

The poop of brown and black bears are similar, although those of brown bears are, on average, larger. If you come upon scat that looks like it could have come from Andre the Giant, it’s from a bear. Bear scat is usually tubular like human feces but larger (5 to 12 inches long and 1 ½ to 2 ½ inches in diameter). It is often tubular with a blunt end and a slight taper, depending on what they’re eating. Bears prefer meat, including carrion, when they can find it. But they are mostly vegetarian. As frequently as not, the scat is made up of grass, roots, or fruits. You may also find such scat with the remains of ants, pine nuts, or berries. A straight diet of strawberries, for instance, results in a semiliquid mass. So does the diet of fish eaten by the large brown bears of southern Alaska.

Bobcat scat tends to be segmented, 3 to 5 inches long, tubular, and varying in diameter from ½ to 1 inch. Bobcats have an excellent digestive system. This means their droppings are hard and compress little when stepped on, as well as that, while there are frequently bones and hair present, you need to look closely to see them. Bobcats also eat berries and grass.

Like other small felines, bobcats frequently scratch a bare spot, defecate, and then cover their scat, although not always effectively. Hiding their scat is thought to be an ancient response to the danger of predation by larger cats. Yet, as with coyotes, bobcats mark their territory by pooping in the middle of trails or at trail intersections. In other words, bobcats are nuts, trying both to hide their poop and advertise it.

Mountain Lion scat may be up to 5 inches long and 1¼-inch in diameter—greater in diameter than a bobcat’s. When segmented with blunt ends, it shows the presence of bones and hair. Like bobcats, they often scratch out areas of leaf litter or soil before leaving their scat. Also like bobcats, they often cover their scat, which is probably a response hard-wired into them from a time when they were the prey of even larger felines. Personally, I’ve always found mountain lions scary enough without feeling a need for even bigger cats, such as tigers.

Read Next: How to Read Deer Tracks in the Snow

Turkeys are one of the very few critters who decided that you should be able to differentiate the sexes by poop. The female’s is a spiral blob, ⅜-inch in diameter, more or less similar to a snail shell, and white on one end, the result of uric acid. The male’s is similar except that it is J-shaped. This is because the males have, according to the scientific literature, “rudimentary internal sex ograns.” If you see large amounts of turkey droppings and feathers under a tree, you’re probably at a roost site, and that’s a great place to start your hunt the next day.