The 7 Safest Mushrooms to Forage and Eat

Perfect for novice foragers, these mushrooms are delicious, easy to find, and are not easily confused with toxic species 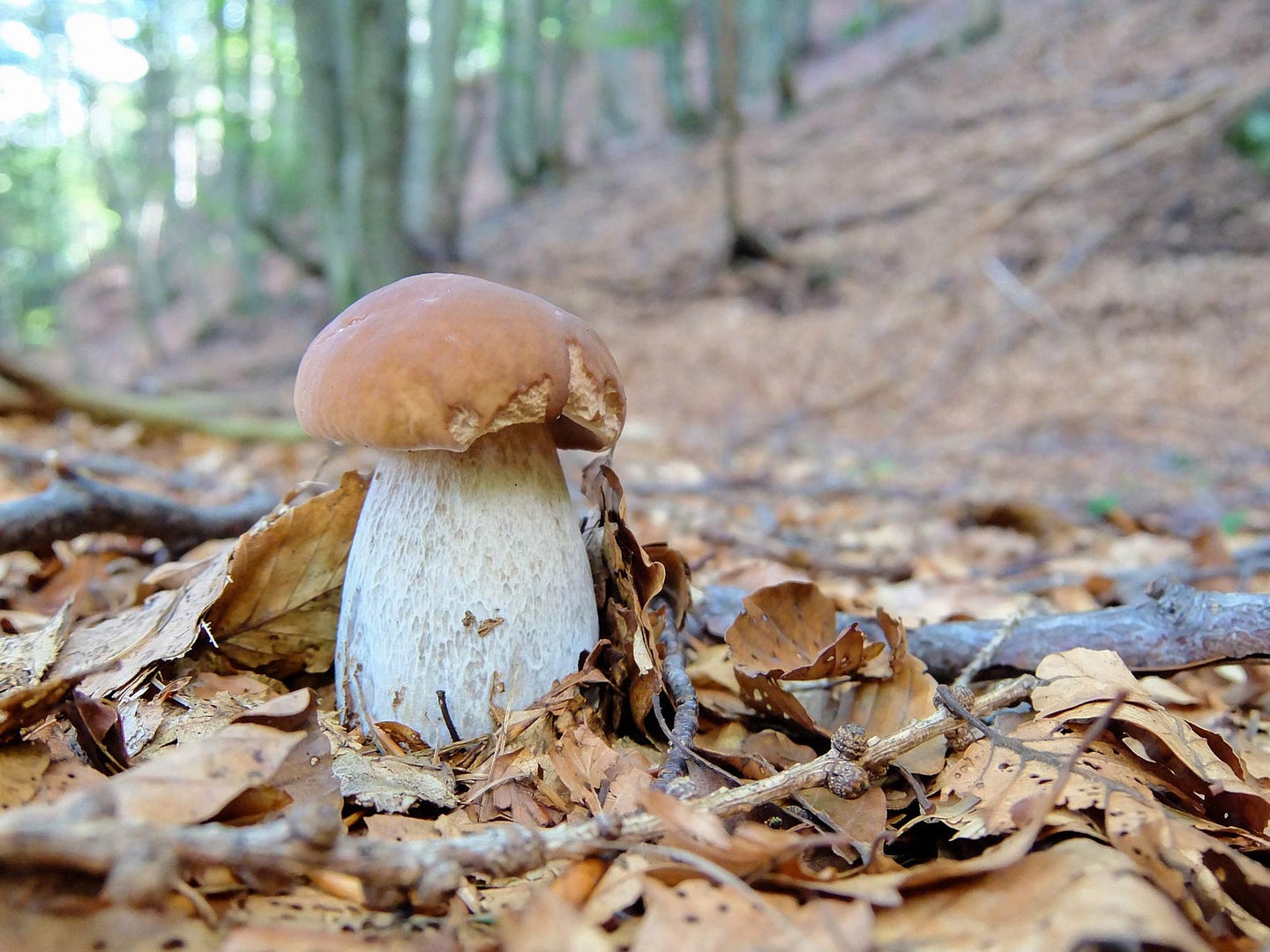 There is some great eating out there in the fungal world, and some of the best-tasting mushrooms are also quite safe, with no or few poisonous look-alikes. But every mushroom article must carry a warning, so here goes: While only about two Americans are killed by consuming poisonous mushrooms each year, many hundreds suffer everything from mild gastrointestinal distress to liver failure from eating “bad” mushrooms. The rule of thumb is to not eat any mushroom without being 100 percent sure that it’s safe to eat. For beginners, that means running your find past an expert. The good news is that there are local mushroom hunting groups that can educate you almost everywhere that mushrooms grow. The other thing to remember is that virtually all mushrooms are at least mildly poisonous in their raw form and must be cooked before they’re eaten. Now, with the scary stuff out of the way, let’s look at some of the tastiest and safest (relatively speaking) mushrooms to forage and eat.

Puffballs are nearly unique among mushrooms in that they are spheres—round, with no open spore cap. They can be as small as marbles or as big as basketballs. Spores are produced internally, which is how the mushroom gets its name. Kick or squeeze a mature puffball and clouds of dust-like spores will rise up. While that cloud may look toxic, most puffballs are safe to eat. You do, however, want ones that are completely white inside. Avoid any that are yellow or purple under the white skin. Also, young specimens are better than mature ones, which can be tough. Not every type of puffball is a delight. I personally avoid both the dog-turd fungus and the wolf-fart puffball, both of which actually exist. Some people develop intestinal irritation from the outer covering, so peel that layer with a knife. Puffballs are commonly referred to as “breakfast mushrooms” because they go so well with eggs. But they also make good side dishes at other meals. A thick slab of puffball develops a golden color when browned in butter. They are often cut into cubes for cooking.

Chanterelles are a great mushroom for beginning foragers. They’re easy to spot because of their bright color, which ranges from orange-yellow to pale gold. They’re also distinctively funnel-shaped. Chanterelles are a meaty mushroom, with a peppery taste and a delicate, fruity odor reminiscent of apricots. They’re prized for their flavor and quite expensive to buy. If you find some, don’t tell anybody, as they tend to grow in the same places year after year. They can be found in deep, old leaf litter around all kinds of plants. One of the best ways to cook them is to simply slice and sauté them in butter. They bake well and go great with chicken, pork, and veal. The only dangerous look-alike is the jack-o-lantern mushroom, which is bright orange, with true gills, while chanterelles have false gills. (A basic mushroom book, like the National Audubon Society Field Guide to North American Mushrooms, explains the difference.) Even a jack-o-lantern won’t kill you, although you may suffer gastrointestinal distress. Make sure to look at a picture of a jack-o-lantern mushroom before you foraging for chanterelles.

Another good mushroom for beginners, oysters are found on standing dead trees or logs. The name comes from the mushroom’s ivory color and shell-like appearance, which resemble an oyster. They usually grow in groups. They have a longer season than many mushrooms and can be found both fall and spring, and sometimes even in winter. They’re prized for their velvety texture and unique flavor, which can range from mild to strong. I have a friend who claims they’re the best mushroom to pair with venison. There are no toxic look-alikes, but you do want to avoid Lentinellus ursinus, the bear Lentinus, which is known as “the only mushroom that raccoons will spit out.” It won’t hurt you; it just doesn’t taste very good. Large oysters are often cut into chunks, rolled in breadcrumbs and eggs, then sautéd. Smaller ones should be added at the last minute to stir-fries. They’re also good added to a cream sauce over chicken breasts or fillet of sole.

4. Chicken of the Woods

Finally, a wild thing that actually does taste like chicken. Chicken of the woods mushrooms, aka the “sulphur shelf,” or “chicken mushrooms,” are an orange-ish fungus found on trees that are diseased or otherwise wounded. The mushrooms tend to grow in clusters, sometimes called a “shelf,” so if you find one, you usually find more. The only part that is eaten is usually the edge of the fruiting body. The other parts tend to be quite tough. The young ones are bright orange with creamy undersides. Young, prime ones are rubbery. After they get older, they turn chalky and are usually full of wormholes and/or bugs. Don’t eat those. Chickens areusually found on oaks, although also on yew, willow, and some conifers. They’re parasitic and produce brown rot on their hosts. They’re usually prepared in the ways that real chicken is. They are also good for freezing, as they retain their flavor for a long time.

RELATED: 7 Poisonous Mushrooms and What Happens if You Eat Them

A win-win for the novice forager. Hen of the woods mushrooms are big—specimens weighing over 100 pounds have been recorded—and they’re easy to find. They tend to grow in groups at the foot of oak trees, where they can often be found annually for years. They’re also delicious with no poisonous look-alikes. How good are they? In Japan, they’re known as maitake, the dancing mushroom, because those who find them may dance for joy at their discovery. Hen of the woods mushrooms are round, brown, with many folds, and are said to look like a hen sitting on the ground—although you may find this a stretch. Once you learn to spot them, though, you’ll be looking for them every fall. The mushroom is full of vitamins and minerals, improves overall immunity, and has shown promise in treating cancer. Slice it about ¼-inch thick and sauté in butter or olive oil. Hens also dry very well for use all year long.

Very good or bad mushrooms tend to attract lots of nicknames. This is one of the good ones. It is most commonly known as porcini, an Italian word meaning “pig.” The young fruit bodies resemble pigs, and hogs are in fact fond of them. The English name, penny bun, refers to its rounded shape and brownish color. The German name, Steinpilz (stone mushroom) refers to the species’ firm flesh. The Dutch name is squirrel’s bread. Nobody knows what the Dutch are thinking. The king bolete grows in deciduous and coniferous forests throughout the Northern Hemisphere, and in southern Africa, Australia, New Zealand, and Brazil, where it has been introduced. The brown cap can be up to 14 inches across. The mushroom itself can weigh nearly 7 pounds. The king bolete is so delicious that it is widely sold commercially, even though it is difficult to cultivate. It’s dried, packaged, and distributed worldwide, and commonly reconstituted and used in soups, pasta, or risotto.

The lion’s mane, aka monkey head mushroom, satyr’s beard, and bearded tooth mushroom, is one of my favorites because, sautéed with a bit of butter and oil, it tastes like lobster. Really. It’s in the tooth fungus family and doesn’t even look like a mushroom. It’s also called the pom-pom mushroom, because it looks like something a cheerleader would shake to rile up a team. It tends to grow in a single clump of longish spines on dead deciduous trees, especially willow, maple, and beech. It’s native to North America, Europe, and Asia, and has been used in traditional Chinese medicine for centuries. I have a friend who is especially fond of lion’s mane. He gave me some recently, and when I asked where he found it, he sent me a photo of a huge one 30 feet up a beech tree. He harvested it using a climbing treestand. Sautéed until the ends of the “teeth” were just starting to curl and brown, it was delicious.