The Striper King of NYC 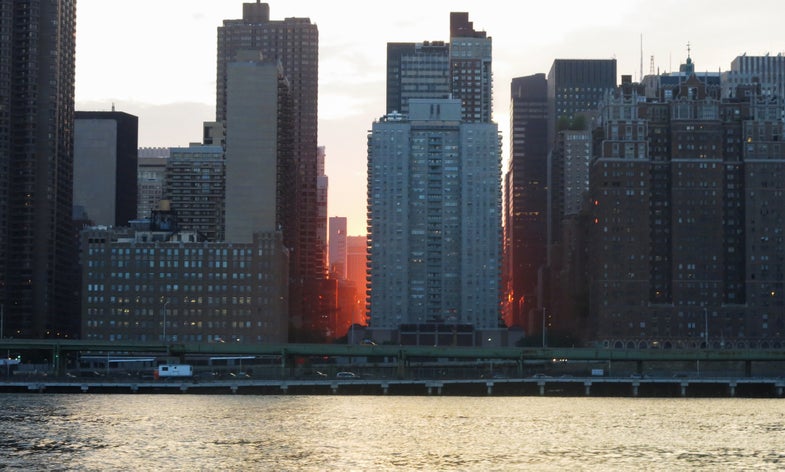 Our boat was practically in the barge’s shadow, or at least it would have been on a clear afternoon. But that was exactly where Captain Joe Shastay wanted us. “The fish are under the barge,” he told me, “and nowhere else.” Two of his fishermen—thirtysomething business guys—flipped their jigs toward the ship’s base. A third angler casted overhand and snagged the top of the barge, as the fourth sat on a cooler, apparently more interested in watching the nearby Statue of Liberty than in fishing.

Shastay instructed the snagged angler to break off the lure and then edged us past a corner of the barge. “Get ready,” he told one of the guys whose lure was still in the water. “You’re gonna get hit here.” The guy must not have believed Shastay, because he looked startled when his line suddenly tightened and his rod flexed from the force of the strike.

In just two minutes, Shastay had gotten the fisherman something I had been after for more than a month—a decent striper hit. I had spent the summer interning in New York City, and every weekend I borrowed fishing rods from a coworker and tried to land a striper. But after seven trips to five different spots, I’d come up zero. I couldn’t imagine how a city composed of little coastal islands could not have good fishing, but I had begun to wonder whether hooking stripers in New York waters was as impossible as spotting deer in Central Park. Then I heard about Joe Shastay, the captain of New York Harbor Fishing, with more than 30 years of guiding on the Hudson and East Rivers—and a purported 482 consecutive trips without getting skunked—to his credit. I decided to put his streak to the test.

The angler missed that first strike, so, after replacing the lost lure with an identical white curly tail jig, Shastay prepared for a second run past the barge. He doesn’t concern himself with presentation in the city’s murky waters; he gets his clients on fish with his hard-earned knowledge of striper hotspots—and by rigging lines, baiting hooks, and changing spots at breakneck speeds. “It’s just a matter of how quick you can do it,” he said. “That’s what it boils down to.”

In college, Shastay’s love of fishing prompted him to abandon chiropractic school and instead earn a biology degree, focusing all his independent research on striped bass. “You can read about stripers till you go nuts,” he told me. After graduating, he took a job tagging stripers with a team of scientists, until he finally made the leap to start his guide service. “I was like, ‘There’s a lot of fish; there are 8 million people. This should work, right?’”

As Shastay motored his 23-foot boat past the barge’s corner a second time, the fisherman redeemed himself by setting the hook yet again.

“You ain’t stuck,” Shastay muttered. He turned to me: “He ain’t stuck.” Then, looking toward the front of the boat, he yelled, “He’s not stuck!“

Shastay was right, of course: the fisherman wasn’t stuck. He hauled a kicking 20-inch striped bass to the surface. It was trim, muscular, and clean, shining even under the cloudy sky. Fish that size, Shastay explained, are the norm in midsummer, while in the spring and fall, stripers not only are more abundant, but they also run 30, 35, and even 40 inches long. Stripers make up 80 percent of his catch, with the other 20 percent divided among bluefish, tautog, summer flounder, and occasional curiosities, like an Atlantic sturgeon, or the 43-inch dogfish shark he’d boated the week prior.

When fish stopped biting at the barge, we motored up the East River, passing beneath the Brooklyn, Manhattan, and Williamsburg Bridges, on our way to an underwater ridge where we planned to fish clams on the bottom.

When we arrived, Shastay was not surprised to see guide Tony DiLernia of Rocket Charters was already there. “We compete a little for the prime spot,” Shastay said, “which, I’m gonna tell you, I found.”

When DiLernia first went into business, Shastay had no patience for his rival. “I didn’t talk to him for 10 years; I used to go like this to him,” Shastay said, flipping the bird. “Then, after about 15 years, he wasn’t leaving, so I called him up and said, ‘Hey, we gotta get together.'” Now, Shastay says they’ve become friends, “even though we’re kind of enemies.”

We anchored, and Shastay smashed clams and baited hooks. The four fishermen held their poles and watched the sunset ignite Manhattan’s glass facades. They were pleased when fish bit, but not impatient when they didn’t. I was surprised that Shastay would choose to fish within view of the only other charter boat on the water, but he assured me that it could have been much worse. Sometimes, near the United Nations building, the fish are concentrated in such a small spot that he and DiLernia have to fish “bumped, like my hip against yours, boat to boat,” he said.

But Shastay is loath to take risks. “Things can get sloppy fast,” he said. He is particularly wary of New York’s huge ferries, which run between Manhattan and the outer boroughs. Ferry captains, Shastay says, care about their schedules above all, so he does his best to give them a wide berth.

At dusk, as we motored to a new spot, Shastay pointed out another danger of fishing New York waters. “You see that boat?” he asked.

When I finally did spot the boat, Shastay explained how the required bright running lights that make boats visible at night in most waters act as camouflage against the city’s skyline. Also, as gorgeous as the views are from the river, Shastay has encountered some of New York’s ugliness. “We’ve seen three bodies out here.”

Our next spot was near shore, where dock lights drew in plankton, the beginning of a food chain that led up to aggressive little stripers and bluefish. Shastay said the small fish would be good to eat, and less chemical-ridden than mature specimens, but the four fishermen still elected to release them. The action came quick, and the anglers caught several fish before one of them said he needed to get back to the marina by 9:30 p.m.

Shastay dropped off the group, but he could tell I was itching to get a line in the water, so he motored us across the East River to a dock on Governor’s Island, between the Statue of Liberty and Brooklyn. The dock was T-shaped, and we focused our efforts on one of its inside corners. Shastay quickly brought in a decent striper, but over the next half hour, I didn’t get a single strike.

By then it was nearly 11:00 p.m., and we both had long commutes home, but he decided that we could take one quick shot at the dock’s other inside corner. On my first cast, I missed a strike. But on my second, another fish grabbed the jig, kicking up froth as I set the hook. It dove for deeper water, but after a 30-second fight, I lifted it into the boat. It was no more than 14 inches long, but I could have cared less. It was my first-ever striper. I went from happy to thrilled when my next two casts brought in two more little fish.

Then, on a cast that went a couple feet under the dock, I hooked something big enough to remind me of how much I love the feeling of line peeling off a reel. The fish was smart enough to dig for the network of wooden beams holding up the dock, and I didn’t trust my 15-pound test to stop it, so I lowered my rod tip and let it run. Somehow, it tired before it could tangle the line around a snag, and I brought it to the boat’s side, where Shastay netted it and sealed the deal.

The striper, at 21 inches, was no more than a biggish schoolie to a seasoned striper hunter, but to someone of my farm-pond pedigree, it was a damn good fish. As an added bonus, it had a tag, which Shastay clipped so that I could send it to the Hudson River Foundation for a cash reward. But for me, ending my season-long quest with proof that healthy, wild stripers survive in the heart of the country’s biggest metropolis was more than reward enough.