A new study shows that energy development over the last 17 years is contributing to the decline of a key... 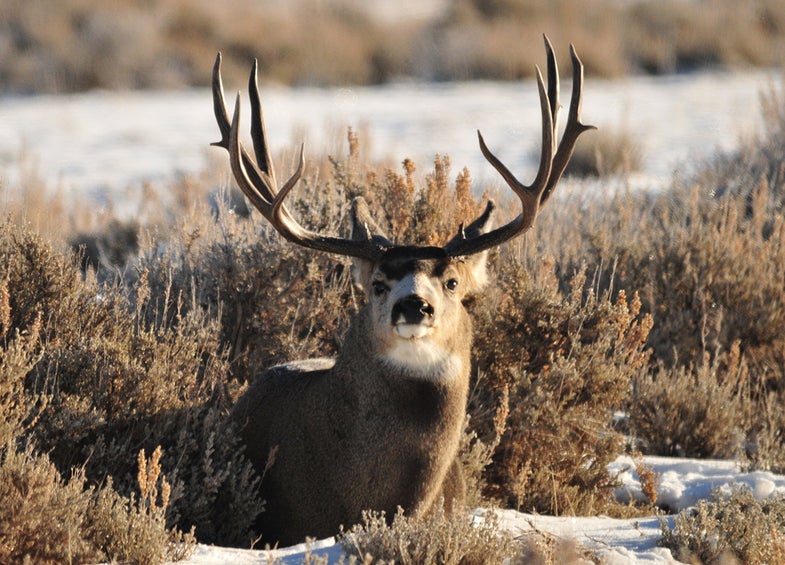 A new study shows that energy development over the last 17 years is contributing to the decline of a key mule deer herd in Wyoming. The reason for this decline is that mule deer in Wyoming’s Pinedale Anticline, a critical wintering habitat for the species, actively avoid oil or gas wells, as well as the access roads that lead to them, according to the study. That avoidance limits available habitat and forces mule deer to survive in sub-optimal areas where food and shelter are more scarce. According to the Casper Star-Tribune, the mule deer population on the Pinedale Anticline has declined by nearly 40 percent since the construction of oil and gas wells began in 2001.

“The study shows the trade-offs of energy development in critical wildlife habitat,” says Hall Sawyer, the study’s lead author who based his conclusions on data collected over 17 years.

“Twenty years ago we didn’t really have a good idea of what was going to happen, if deer would avoid these areas or if it would change anything or not,” Sawyer says. “As development progressed, it became clear quickly that deer avoided well pads. It also became clear that mule deer numbers began to drop off.”

Portions of the Sublette herd, which Sawyer studied, migrate from 18 to 80 miles each year to winter on the Pinedale Anticline, which provides just enough food for the animals to survive the winter. When the study began, roughly 5,200 animals spent the winter there. However, the study showed a 16 percent drop in the entire Sublette herd and a 40 percent decline in those wintering in the Pinedale Anticline since 2001, when construction of hundreds of wells and miles of access roads began. Sawyer’s study shows the correlation between the construction and the population decreases. The deer avoid wells and roads “because they perceive them as risky and try to keep their distance,” Sawyer says. The deer will move closer to wells during particularly brutal winters, but otherwise, they stick to small bits of quality habitat.

“That’s one of the trade-offs. The study shows there’s trade-offs,” says Sawyer. “When we lose critical habitat and when we lose extra acres of habitat because of avoidance, we should expect fewer animals.”

The past winter was especially hard on the Sublette herd. Heavy snows and frigid temperatures made foraging difficult and led to a high mortality rate. Doug Brimeyer, a wildlife management coordinator for the Wyoming Game and Fish Department, says the lack of food was simply too much for many animals to endure.

“This year those animals basically just ran out of gas by the end of March,” Brimeyer says. “We started seeing some of those animals looking in extremely poor condition, and we started picking up a lot of mortalities on the adults.”