Several years ago I co-hosted a long-forgotten clay-target shooting TV show. The host was both a competitive sporting clays shooter... 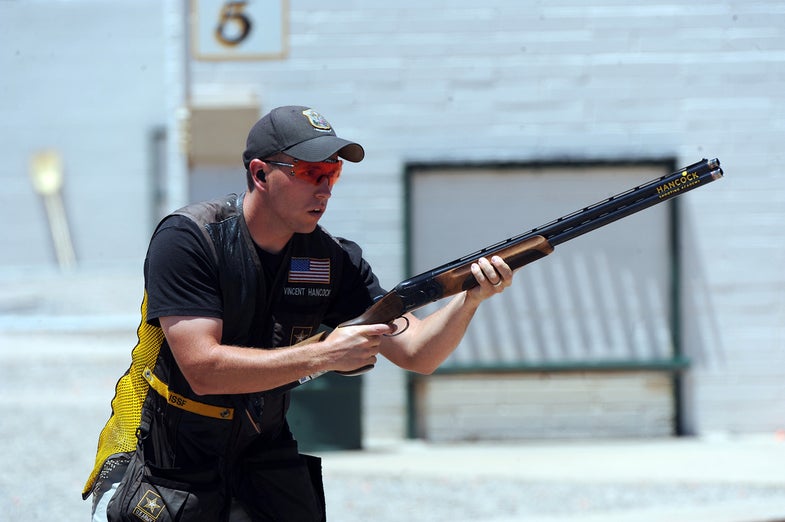 Several years ago I co-hosted a long-forgotten clay-target shooting TV show. The host was both a competitive sporting clays shooter and a member of the US ski team and, therefore, was composed almost entirely of lean muscle. The two of us were looking at a crowd of shooters when she mused: “Shotgun shooting isn’t exactly a hardbody sport, is it?”*

Maybe it should be. I think we need a new shotgun sport, one that will get us in shape for hunting season. What I’m imagining is summer biathlon, but with shotguns, or sporting clays, but timed.

Biathlon, a combination of cross country skiing and rifle shooting, comes from Scandinavia, where it originated as military training. Although Norway seems to get the credit for inventing the sport, the Finns perfected the full-contact version against the Russians during the Winter War of 1939-40.

Originally called “military patrol,” biathlon has been in and out of the Olympics since 1924 and has been an official event since 1960. To be good at biathlon you have to be able to ski fast and shoot while your chest is heaving, your lungs are burning and your heart is pounding. If you can’t hit enough metal plates, you have to ski penalty laps.

There’s a summer version, too, that substitutes running for skiing, but still involves rifles. There should be a version for shotguns. Granted, elk and sheep hunters and the like need to be in good shape and be able to shoot, but so do bird hunters. I spend as much time as I can at the range in the summer, so I can hit what I shoot at in the fall, and I make it to the gym as often as I can, too, to keep me fit for following bird dogs. And, while I am doing one or the other, I sometimes think about how much more efficient it would be to combine the two.

So my modest proposal is a running sporting clays course. There’s a starting gun, and the clock starts. You run to a station, and if you don’t break, say, four out of five, you run a short penalty lap, more of a wind sprint, probably, and go on. Shotguns would be carried unloaded, at port arms, and you would have to carry 50 or 100 rounds of ammunition as well. Fortunately, that burden would get lighter as you made your way around the course. Guns could be any gauge and weight and you would have to choose between the tradeoff of a light gun being easier to carry but harder to shoot at clays.

And, shotgun summer biathlon could help take sporting clays back to its roots. The game was once all about hunting practice. When it first came to this country, it was called “hunter’s clays” and at some stations they would sneak in “poison” targets of a different color representing hen pheasants, and you were penalized if you shot them. At others, you would shoot from an unstable boat as if duck hunting. All that is gone now, replaced by curving chandelles, falling battues and 60-yard crossers, which are fun to shoot but don’t have much to do with hunting.

Imagine the realism and aerobic possibilities of a course replete with real-life field hazards such as barbed-wire fences, creeks, ditches, aggressive cattle, mean farm dogs and skunks, all of which I have had to get over, around, or away from in one way or another over the years.

Would it catch on? Who knows, but shotgun biathlon at least gives me something to think about when the treadmill at the gym gets boring.

*This reminds me of one of my favorite sports quotes. John Kruk of the Philadelphia Phillies lit a cigarette in a bar, and the woman he was talking to twitted him for breaking training. He replied “Lady, I’m not an athlete, I’m a baseball player.”