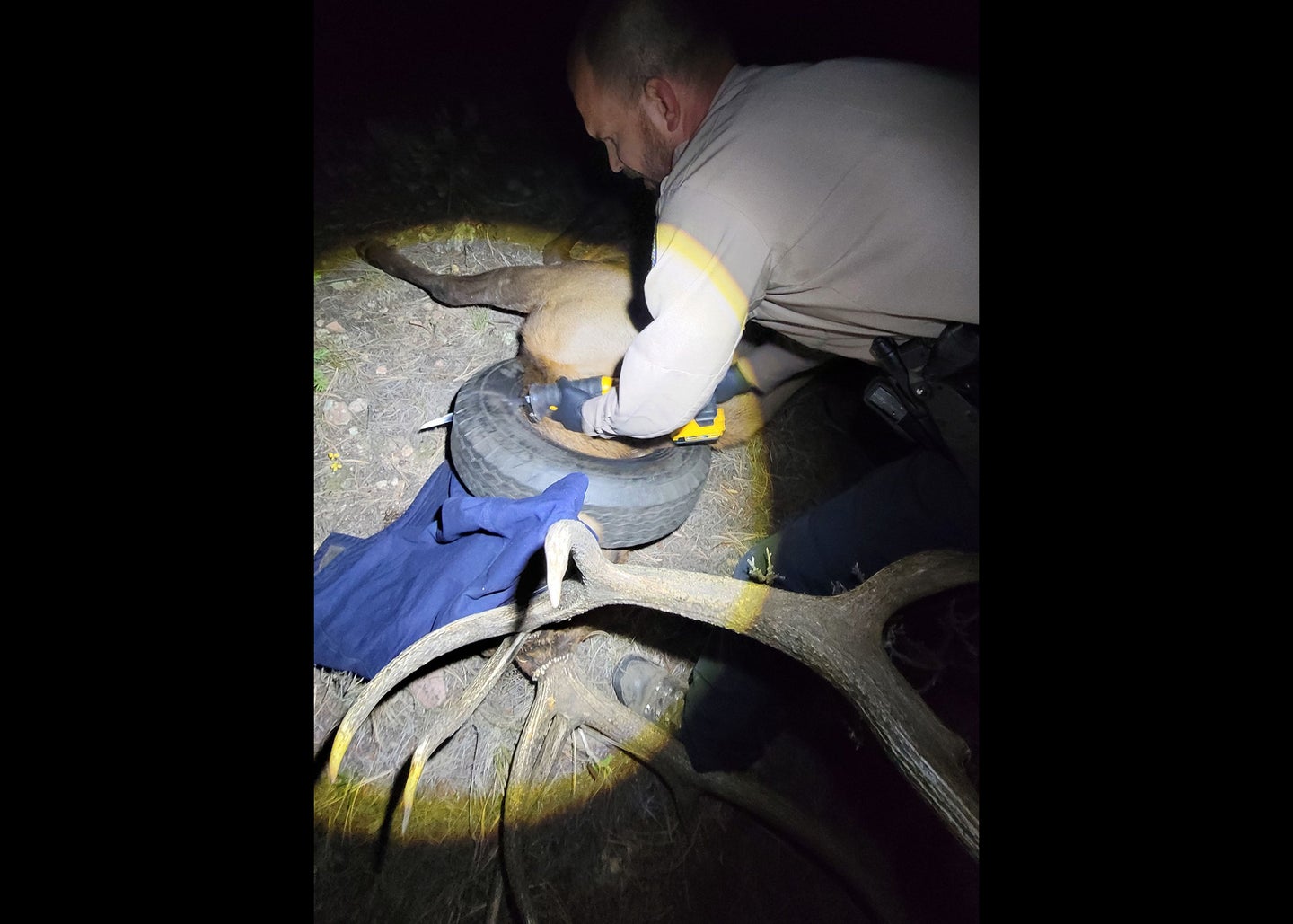 Why did wildlife officers cut the elk's antlers instead of the tire?. CPW
SHARE

When Colorado Parks and Wildlife (CPW) officials darted a bull elk with a tire around its neck and freed the critter last Saturday, they probably didn’t expect that the internet would blow up. But it did. And for the past few days, the story of the tired elk has been nearly as big as Demi Lovato saying that calling beings from outer space “aliens” is a derogatory term. Apparently, we should be calling them “extraterrestrials.” The story of the elk was picked up by newspapers, TV stations, and wire services. In addition to American publications such as the New York Times, USA Today, and The Washington Post, the BBC also picked the story up.  It should be noted that the BBC spells the word “tire” as “tyre,” which is actually the name of a city in Lebanon. Turns out, even people who can’t spell correctly were enthralled.

The facts are pretty straightforward: The elk had first been spotted in 2019 during a wildlife population survey. In 2020, it was seen three times on trail cams. In May and June of this year, four unsuccessful attempts to intercept the elk were made near the Colorado town of Conifer. Then, last Saturday, wildlife officers Dawson Swanson and Scott Murdoch got lucky. They stalked to within 40 yards of the critter and darted the 4½-year-old, 600-pound animal a mile south of Pine Junction, cut off its antlers (it was a 5X5), and then administered a wake-up drug. They estimated the weight of the tire at 35 pounds, which included about 10 pounds of pine needles and dirt lodged in the bottom of it.

Nobody knows just how the elk had gotten the tire around its neck in the first place. One theory was that the elk had stuck its head through a tire swing. Another was that the bull had purchased it at a Discount Tire. Either way, something about the story resonated with people, likely because, at one time or another, most of us have felt like we were carrying a burden that didn’t really belong to us. I certainly have.

You might be tempted to look for some larger significance in the story of a wild animal being hindered by a discarded human appliance like a tire. But what really got people commenting was the fact that the bull’s antlers had been sawed off rather than the tire. The two officers said they couldn’t cut the metal bead in the tire, had only limited time, and decided to saw off the antlers. This really got people talking:

“A Sawzall would have zipped right through that tire, metal and all,” wrote one commentator to the Washington Post story.

“Without antlers, the elk is as defenseless as an Eagle without claws,” wrote another.

Someone answered: “Which is why the males die by the thousands after they shed them naturally each year.”

“A disc grinder would have done the trick. You can see one in every episode of Storage Wars cutting the locks made to resist cutting.”

“Read the article! There was a steel band in the tire that they could not cut through.”