The Complete Guide to Scorpion Stings and Their Venom

How to avoid these "grumpy recluses," and what to do if you get stung 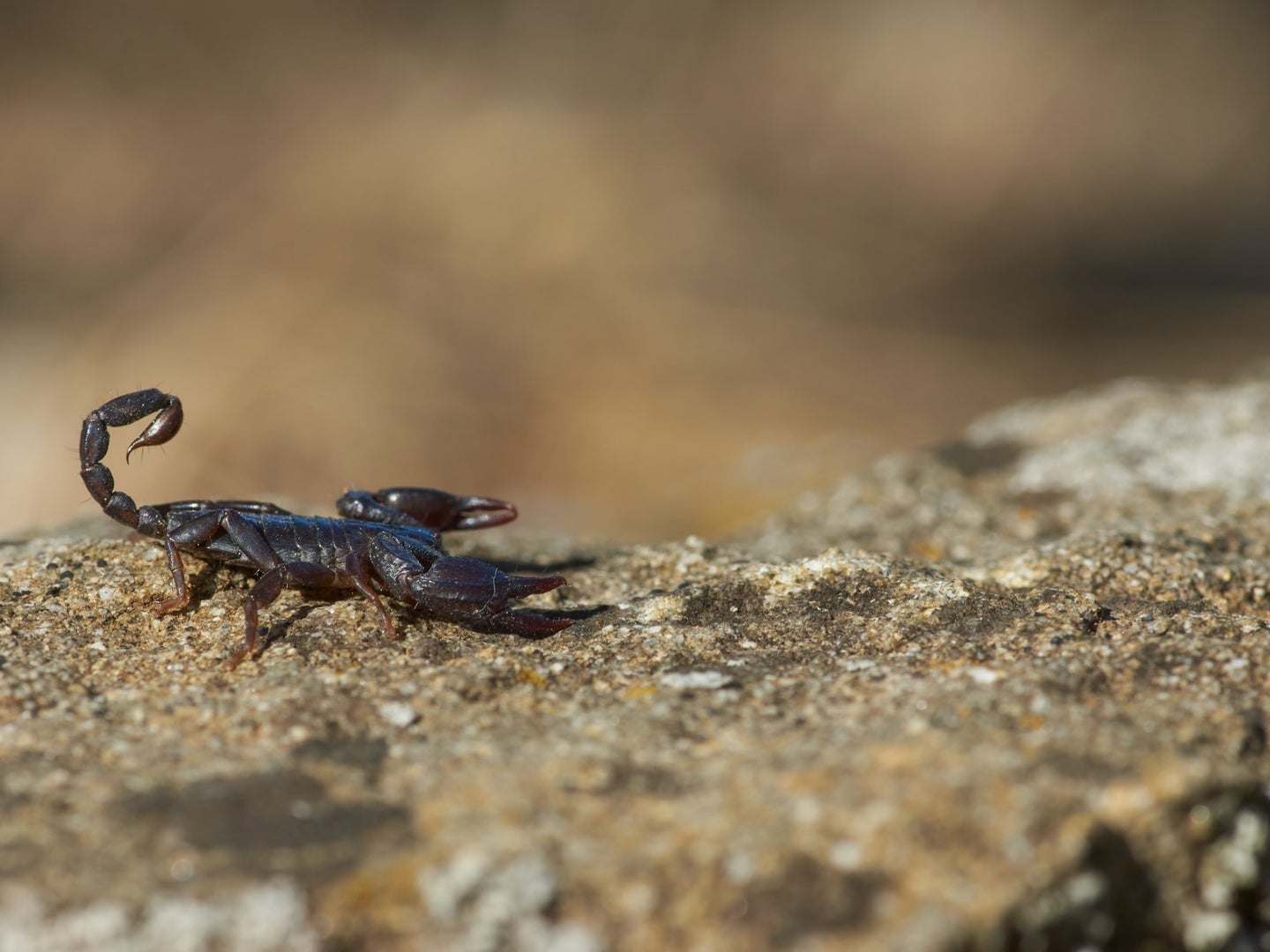 They might look scary, but most scorpions don't hit much harder than a typical bee. Wolfgang Hasselmann / Unsplash
SHARE

This story was originally published on Popular Science.

After the sun goes down, William Hayes begins his hunt. Armed with nothing more than a blacklight, he heads out into the southern California desert in search of biological treasure. The ultraviolet light doesn’t illuminate the path well at all, but it will help him spot his stinging, pinching, eight-legged prey: scorpions.

The Loma Linda University biology professor sweeps his blacklight a few feet ahead of him and spots one scurrying out from under a rock, its body glowing fluorescent green under the UV rays. Now, it’s simply a matter of identifying the species, noting behavioral data, and perhaps taking a few live specimens scooped into portable containers back to the lab where he will collect and study their venom.

He’s been stung many times in the process, sometimes deliberately, sometimes not, so it’s safe to say he has an intimate knowledge of these creatures he finds so fascinating. And what he knows will help you when you venture into scorpion territory.

Scorpions live and breed in Hayes’ natural habitat: southern California (though they also reside as far east as North Carolina and occupy many states in between, mostly dry southwest and western regions in New Mexico, Utah, Nevada, California, Arizona, and Texas). That overlap gives him an abundance of opportunity to study them, their venom, how they use it in the wild, and how it varies from species to species.

Read Next: The 12 Deadliest Insects in the World

Most scorpions are between 2 and 3 inches long, and all are carnivores, meaning they munch on insects, small lizards, and even snakes. They generally capture their dinner using their pedipalps (which you may know as pincers), saving their venomous tail stinger for paralyzing larger prey.

As invertebrates in the arachnid family, scorpions are closely related to spiders and ticks and are most active in warm summer months, hunting at night and keeping to the cool shade during the day. They hibernate in the winter, slowing their metabolism so they can last up to a year without food, one reason they are able to thrive in extreme environments.

As for their venom: “The sting of most species is no worse than that of the typical bee,” Hayes says.

Their Look is Worse Than Their Sting

He knows this firsthand, as he will occasionally provoke defensive responses with his own fingers instead of the dead mice or membrane-covered beakers he and his students use to collect venom. When they force scorpions to sting, they’re attempting to determine a slew of factors: whether scorpions give dry bites (a sting without venom) or always wet ones (a sting with venom), whether sexual differences exist in defensive stings, how much venom comes with each sting, and whether scorpions can control how much they inject (they can).

But don’t worry about Hayes and his fingers; of some 2,500 scorpion species worldwide, only 30 or so have strong enough venom to endanger most humans, and only one with potentially deadly venom lives in the US: the Arizona bark scorpion.

But just because a sting isn’t likely to severely injure you doesn’t mean you should ignore scorpions entirely.

How to Avoid Encounters with Scorpions

Fortunately, avoiding these little arachnids isn’t hard to do. Scorpions use tiny hairs on their legs and body to sense vibrations and will likely skitter into a safe hiding place before you even see them.

“They don’t want anything to do with us,” Hayes says. “They’re reclusive and they want to be left alone.” So if you spot one during the day, consider yourself lucky. At night, carry a blacklight to spot the creatures more easily—their brown or black bodies blend in with the landscape under normal flashlights.

Read Next: The 10 Worst Insect Stings in the Wild

Of course, hidden scorpions can still sting if you accidentally enter their refuge, so watch where you put your uncovered hands and feet when in their typically dry, rocky natural habitats, and be cautious when reaching into crevices or under rocks. They can even reside on cliffs or in trees, so climbers should proceed with caution.

Even if you’re not camping or hiking, if you live in regions scorpions call home, it’s not a bad idea to shake out shoes, jackets, and boxes left outdoors before thrusting in hands and feet.

What to Do if You’re Stung by a Scorpion

Don’t panic. While scorpion stings can be painful, most have no lasting consequences and the pain is likely to dissipate within 10 minutes, Hayes says.

They can cause bruising and swelling, however, and heat around the injection site. In a small percentage of people who are allergic, venom can cause anaphylactic or anaphylactoid reactions. If you find out you are allergic, carry treatment like an epinephrine auto-injector with you in scorpion country. Good news: If you’re allergic to bees, you’re not automatically allergic to scorpion venom.

Allergic or not, try to avoid getting stung by the same scorpion more than once in succession, because additional stings can be more serious. The first venom that emerges is often clear and has lots of potassium ions that cause pain, but the venom in subsequent stings is more likely to be milky in color, with a greater concentration of proteins that are likely more toxic than the initial sting, Hayes says.

If you’re only stung once by most scorpions in the U.S., you’ll probably be just fine in a few minutes. But keep an eye out for signs and symptoms including difficulty breathing, intense muscle spasms, intense pain that doesn’t go away, nausea, or vomiting, especially in small children. If you or a companion experience any of those or have been stung more than once, head to a hospital to see if you need anti-venom, though this is only available for Arizona bark scorpion stings.

That species, which can be identified by its dark yellow-tan color, long, slender tail and narrow pincers, can be found in Arizona, southwest New Mexico, southern Nevada, and eastern California. And if it stings you, Hayes recommends visiting a hospital if symptoms “become at all alarming.”

Even Scorpions Have Their Place

But scorpions aren’t just grumpy recluses that will lash out if you get too close. Scientists have found that scorpion venom can be used to treat brain tumors in humans and to block signals from cancer cells to prevent them from growing. Researchers have also discovered that the pallid bat and grasshopper mouse are immune to scorpion venom and are studying those species to see if they might provide the key to pain relief for humans.

And as terrifying as scorpions are often portrayed on TV and in movies, there’s simply no data to back up widespread fear: as of 2018, there had been fewer than four deaths in the past 11 years in the US (there are, of course, more fatalities in countries with scorpions that have more toxic venom). So don’t run away in fear the next time you see one of these arthropods in the wild. “They’re not out to get us and they are important components to the ecosystem,” Hayes says. Just keep your distance and let them live their lives.