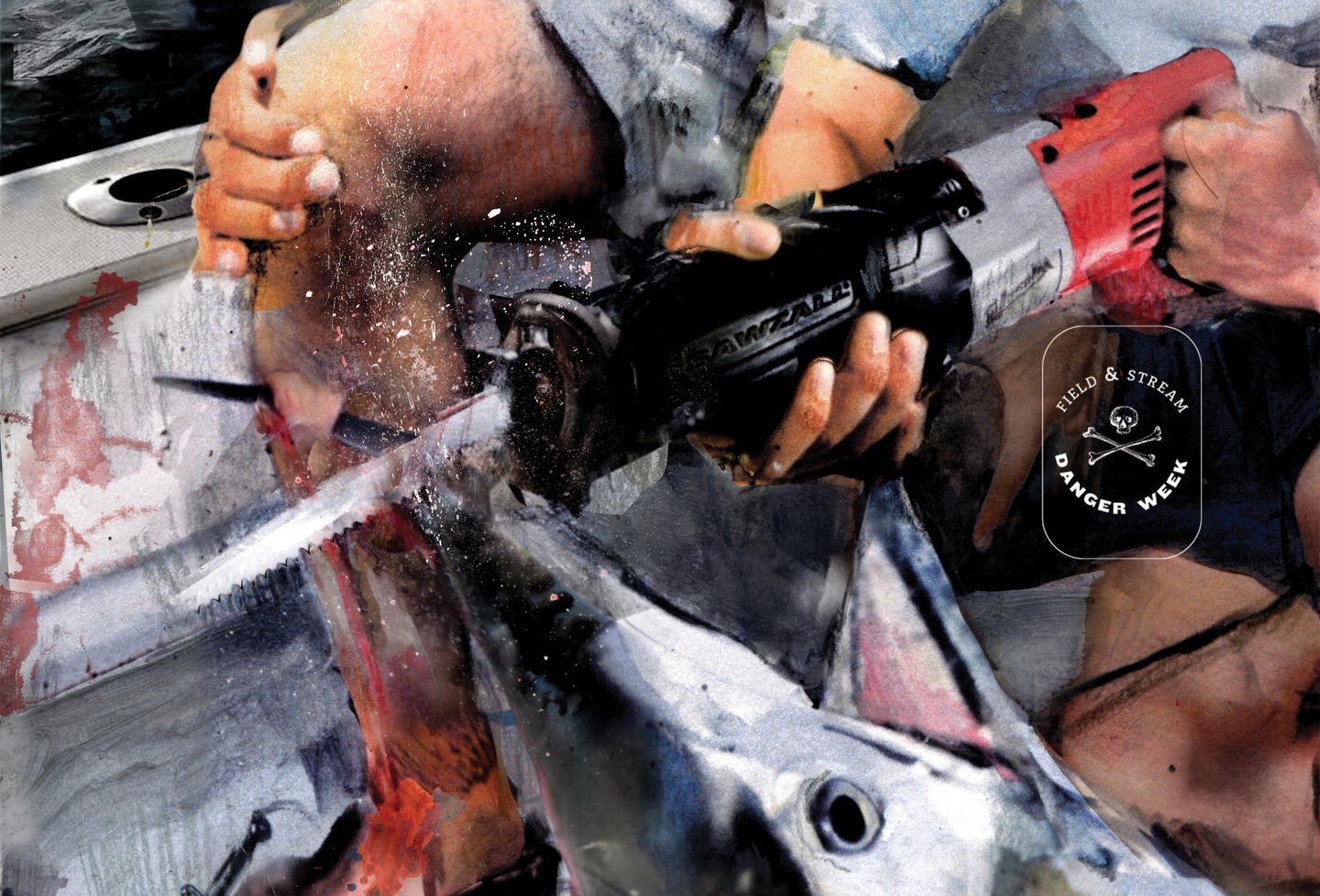 During a 2015 fishing trip, three men lost control of a marlin they were hoisting into the boat—and Russell Ching was on the wrong end of the bill

BEFORE THE ACCIDENT, it was a beautiful day. We caught mahi-mahi, tuna, and a wahoo. We were joking about how we were just a marlin shy of a pelagic grand slam. That’s when it bit. After a 45-minute fight, we had a blue marlin at the side of the boat. And it was big—500 or 600 pounds.

Our 22-foot boat didn’t have a transom door that we could slide the fish into. We had to lift the marlin and pull it in. But the dead weight was too heavy for us. Then the captain had the idea of wrapping rope around a cleat and using it as a pulley to hoist the fish in. Two guys would lift the marlin, while the third would pull on the rope. I’d been fishing long enough to know not to position myself in front of a marlin’s bill, but I was tired and just wanted to get the fish in the boat. I said I’d take the rope. Once we got enough of the fish over the gunnel that its weight would carry it the rest of the way, the marlin started sliding into the boat—and came right at me.

Until then, I hadn’t appreciated that when you’re dealing with animals of this magnitude, you are nothing compared to them. The fish’s bill went into my leg like a hot knife through butter. I’m lucky I was standing up, because if I’d been kneeling, it might’ve gone through my thigh and hit an artery. The captain and my buddy didn’t notice what had happened at first. “Guys! The marlin is in my leg!”

After the shock wore off, the captain used an electric saw he had on the boat to cut the bill off. I knew that with injuries like this you’re not supposed to pull the object out. But I’m looking at the bill stuck in my leg, just above the shinbone, thinking, I want this out of my leg.

So I tried to pull it out. But a marlin’s bill is really rough, and with my skin stretched so tightly over it, there was no budging it. My buddy didn’t want to look at the wound, but I made him. “Hey,” I said, “you need to see if it looks like arterial bleeding and if I need a tourniquet or need to be airlifted out of here.” But the bleeding wasn’t bad.

The captain put the boat in full throttle and we rode the 20 or 30 miles back to the harbor. I have a pretty good pain threshold, but that boat hit a couple of bumps on the ride back where I could feel that bill in my shin. Those hurt.

There were a bunch of people waiting for me at the ER—nurses, the trauma team, doctors in their residencies… I guess everybody wants to look at the guy with the marlin in his leg.

A week after they removed the bill, I had to go to a doctor for debridement so they could scrape off the dead skin around the wound—that hurt too—and the doctor noticed the wound was looking red and infected and got alarmed. He said it looked like necrotizing ­fasciitis—better known as flesh-​­eating disease. A marlin’s bill must really be filthy. I immediately went back to the hospital for antibiotics.

I was anxious about fishing again, but the best way to get over that is to get back on the horse. I’ve caught marlin since, but I feel uneasy about it. Before, I almost felt invincible around them. Now I don’t want to mess with them. The danger is so present and real. I’m amazed more people don’t get hurt.