Mountain Lion Tranquilized and Removed From Beneath a Porch in Colorado 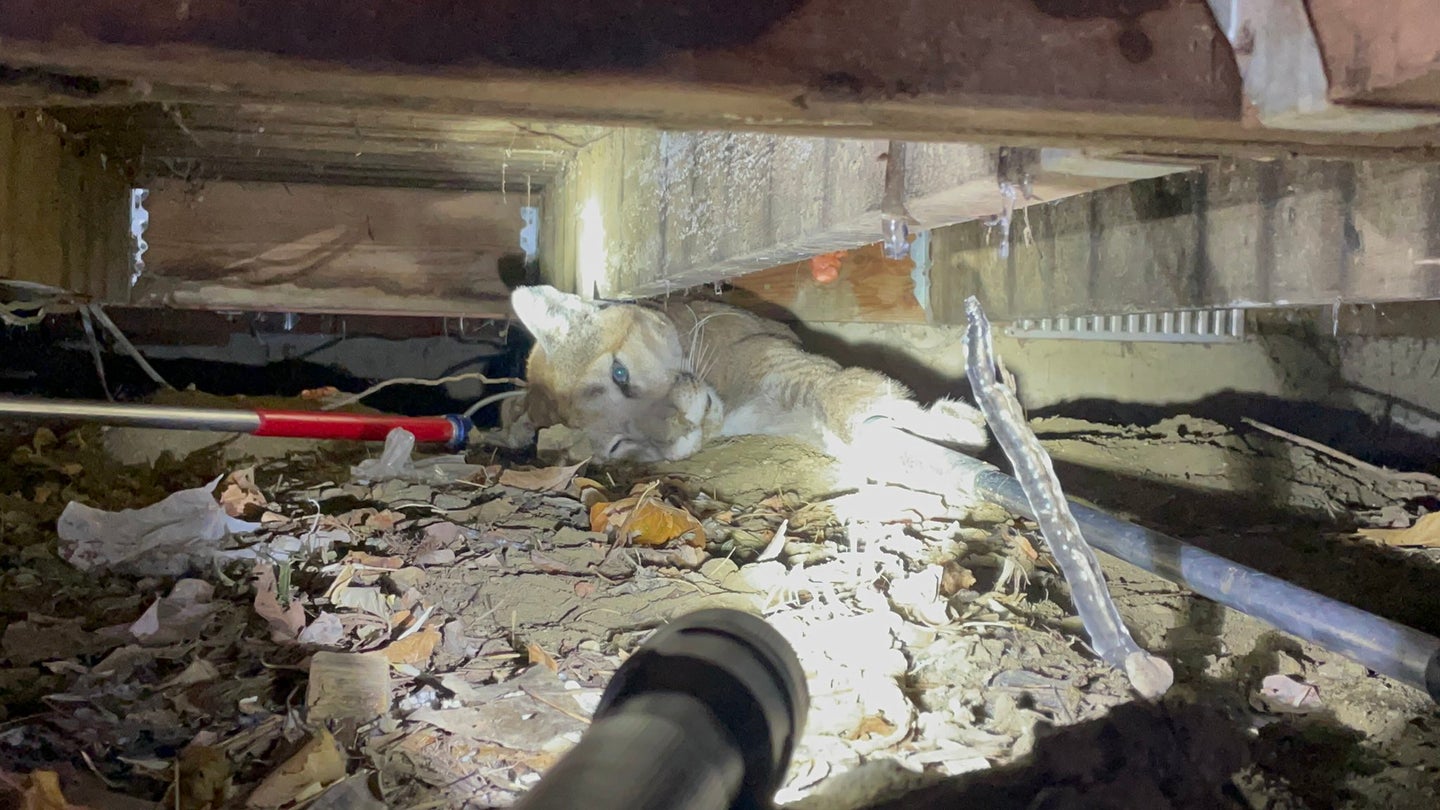 Officials said that the mountain lion appeared to be in good health. CPW
SHARE

Alerted by their barking dog, homeowners in Boulder, Colorado, peeked under their porch on Sunday morning expecting to find a raccoon—and instead discovered a mountain lion. Officials from Colorado Parks and Wildlife (CPW) were called to capture the animal, which they described as a sub-adult male in good condition. The big cat weighed approximately 115 to 120 pounds. Boulder Police Department Animal Protection officers and Boulder’s Open Space and Mountain Parks rangers helped pull the lion out of the tight space after a CWP officer tranquilized it. The animal was successfully relocated to a rural area within a couple of hours.

Mountain lions are not unusual in Boulder, a city of 106,000 people that is home to the University of Colorado. According to a CPW press release, the February 27 incident was the 18th mountain lion report in Boulder since January 15. F&S recently covered one of those reports—an incident in which a Boulder woman saved her 25-pound pet dog from a mountain lion attack by screaming at the big cat.

“Leading up to this over the past couple of weeks, we’ve had several pets taken in town by a sub-adult lion,” said CPW Wildlife Officer Tyler Asnicar. “They’ve been spotted a lot in north Boulder. This may or may not have been one of those cats, but increased winter activity is fairly typical as they follow their prey base down [from the mountains], particularly the mule deer that move into lower elevations this time of year. The cats concentrate around the western edge of town, and that leads to an increase in sightings and probably led to this cat being in town looking for something to eat.”

Asnicar said Boulder residents should “be aware, but don’t be worried.” Sightings of lions and other predators such as bears, coyotes, and foxes are to be expected in Rocky Mountain communities. “Cats are going to come and go, it is not a new thing and it isn’t going to go away,” he added.

Capture and relocation is not the only management tactic that CPW can employ when dealing with mountain lions in urban and semi-urban environments. Officials decide how to handle mountain lion encounters on a case-by-case basis. In this situation, the big cat was in such a densely populated area that they opted for relocation.

CPW advises people who live or recreate near mountain lion habitats to keep a close eye on their pets and teach their kids how to react if they encounter a lion. Some of the agency’s recommendations include staying calm, backing away slowly,  and doing everything you can to appear larger when encountering a cougar. Lion attacks on people are rare, with fewer than a dozen fatalities in North America in the last century. However, if you’re confronted by an aggressive lion, the recommended response is to wave your arms, speak firmly, throw sticks, stones, or any other available objects at the cat—and fight back if it attacks.