How to Fight off a Bear, Lion, and Wolfpack with a Knife

If a wild animal—or even a pack of wild animals—attacks you, a knife might be your only defense. Here's how to fight back 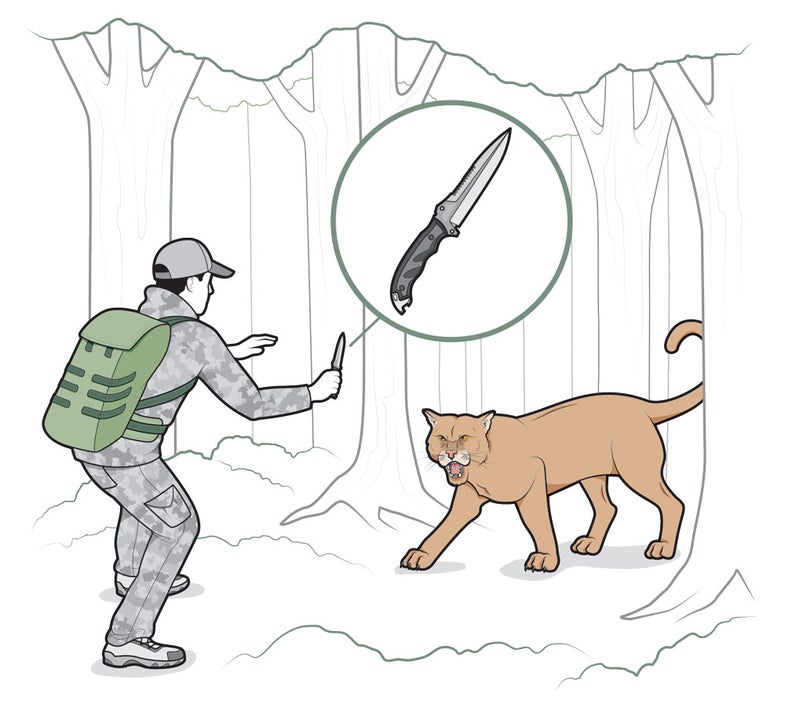 Let’s be real: Your chances of beating back a seriously pissed-off bear, mountain lion, or pack of coyotes aren’t much better than those of finding a unicorn in an elk herd. But with a knife in hand, you’ve at least got a fighting chance (although a sprinkling of fairy dust wouldn’t hurt). Robert Young Pelton has thought about this more than most . The war-zone journalist and bestselling author of The World’s Most Dangerous Places owns DPx Gear and designs hard-use knives—one of which is a favorite of hog hunters, who know a bloody thing about getting to the heart of the matter. “A quick kill requires a deep, open stabbing wound—ideally straight into the heart,” Pelton says, “to drop systolic blood pressure and starve the beast’s brain of oxygen.” But that’s not the only way to make a four-legged opponent think twice about taking a bite out of your hide.

“A mountain lion will grab prey with jaws and front paws to crush the neck,” says Pelton, who has been stalked by big cats in East Africa and British Columbia. “Meanwhile, they’re attempting to disembowel you with the rear paws.” Forget killing such a kitty. Instead, Pelton says, “break up the attack and make the cat run off.” Bear-hug the animal tightly to protect your head and organs, and stab at the eyes, shove the blade in the mouth and throat, and jab as quickly and as often as you can.

Two strategies are common in the accounts of people successfully fighting off a bear attack with a knife. First, the hand not holding the knife is used, often sacrificially, to stiff-arm the bear’s head or jam a fist into its mouth. And second, the knife is used to stab the bear repeatedly—”savagely, desperately,” Pelton suggests—around the neck and head.

Canids will parry in groups and go for the rump or legs, so face the animal head-on. Keep the snarling jaws away from you, and stab through the side where you’d place a bullet, into the hard, knotlike heart. “And don’t poke,” Pelton says. “Imagine a spot 6 inches through the chest and strike hard.” Lever the knife back and forth to create maximum tissue trauma, then remove it quickly for rapid blood loss.