The 10 Most Underrated Cartridges

These proven cartridges don’t get the respect they deserve. You want a gun chambered in something highly effective but a little different? Look no further 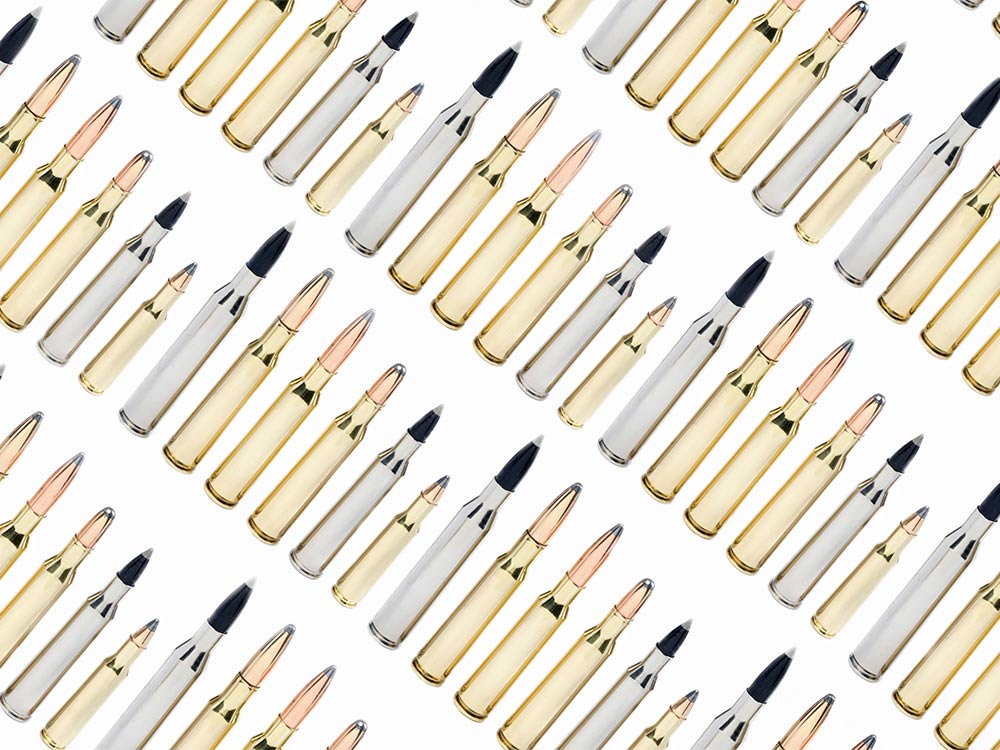 A selection of excellent but unheralded cartridges, from Winchester ammo. Winchester
SHARE

A little while back I attempted to count the number of commercially available cartridges and stopped because everything turned purple and silver, and because my brain is not equipped to handle figures in the seven-digit range. This cartridge cornucopia has evolved because we believe that newer is better in all things, and that ballistic science is daily working miracles, and that one does not want to be left behind, does one?

As a result, some very good cartridges are not given the respect they deserve, mostly because they’ve committed the unpardonable sin of being old, or because they’re neglected by ammo makers who should be doing a better job with them. Here are ten. 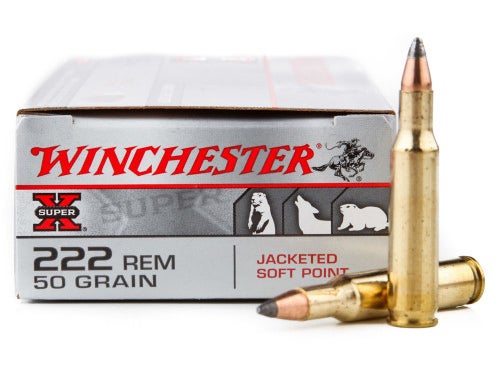 Introduced in 1950, this was the brainchild of Remington designer Mike Walker, who was a genius. Combined with the Remington 722 bolt-action, also a Walker creation, it was one of the very first cartridge/rifle combinations that would produce minute-of-angle groups. The classic loading was a 50-grain bullet at 3,200 fps, and so it remains today. Benchrest shooters seized on the .222 immediately, and for the next 25 years, before it was replaced by the 6PPC, it was the go-to round for those who sought hyper accuracy.

Eventually it was overshadowed as a varmint load by the .223, but it retains its original virtues: negligible recoil, long barrel life, mild muzzle blast, and still, terrific accuracy. If you like to make the prairie dogs dance, there’s nothing that beats it.

Designed in 1935, the Swift is a 6mm Lee necked down to .224. It was the first hyper-velocity cartridge, and its original loading of a 48-grain bullet at 4,100 fps caused shooters to rush about in confusion. It was intended as the nuclear option for woodchuck hunters, of which there were then many.

Perhaps no cartridge has suffered from as much calumny, misinformation, and outright horse do-do as the Swift, and this was before the Internet. I owned a couple, shot the daylights out of them, and had no troubles of any kind. The Swift is a handloading proposition; since it does not sell a lot, ammo makers don’t take the kind of care with it that they should. It’s no longer a woodchuck cartridge, because the woodchucks have returned to the woods, but if you’d like to make a coyote re-think how he makes a living, the Swift will do that. 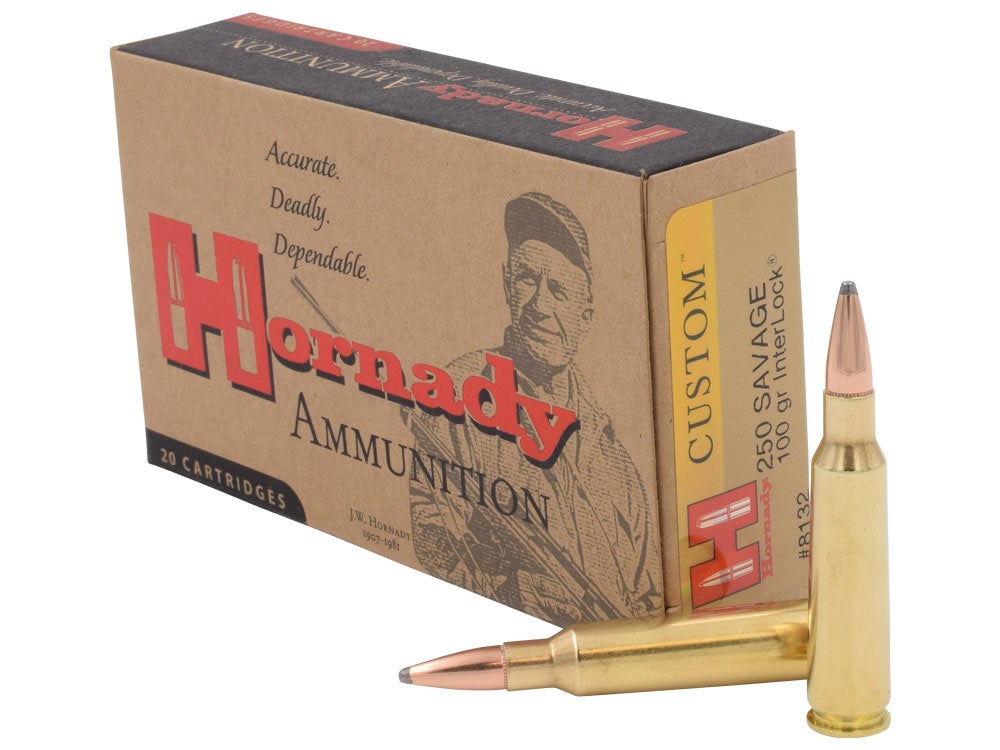 Originally called the .250/3000, this was the first commercial cartridge to achieve 3,000 fps, courtesy of an 87-grain bullet—and it managed this miracle in 1915. Teamed with the Model 99 Savage rifle, which was also far ahead of its time, the .250/3000 was a sensation. People hunted all over the world with it, and outlandish claims were made for what it did. Someone shot a tiger with a .250/3000 and wrote about the feat in Field & Stream.

The .250 was, and is, about as fine a deer cartridge as you can find. It’s light-recoiling, but still is able to use bullets that are heavy enough to do the job with no questions asked. The great Larry Koller, who was probably the best whitetail hunter I’ve even known, considered the .250 tops. If you find a nice one—particularly a rotary-magazine 99 Savage—grab it. 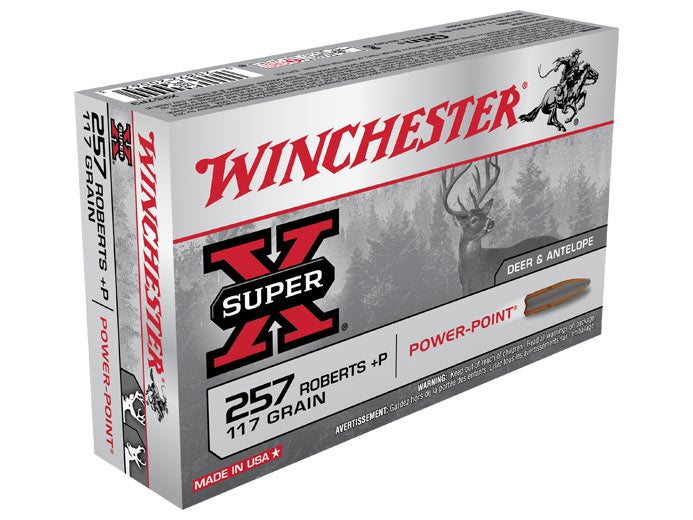 Commercially introduced by Remington in 1934, this is a 7×57 case necked down. It’s the work of Major Ned Roberts, and some people like to call it the “.257 Bob.” I think these people should be hung in trees where crows can peck at them. The Roberts is a distinct step up in power from the .250, but still manages to retain its light kick and mild report.

The original Remington loading was both underpowered and cursed with a horrible round-nosed 117-grain bullet that greatly reduced its range. There have been subsequent attempts by other companies to update the Roberts, but they have fallen short. Its true greatness can be appreciated only by the handloader. I owned a Roberts made by the late Dave Gentry. It had a 20-inch barrel, and the velocities I could get with 100- and 115-grain bullets were far, far in excess of what factory ammo put out.

The .25/06 is a bit like the .220 Swift in that it was a true high-velocity cartridge ahead of its time, and people didn’t quite know what to make of it. It’s a fine long-range cartridge that kicks less than a .270, is capable of extreme accuracy and can handle any game up to and including elk.

Not a lot of rifle makers chamber it these days. More fools they. 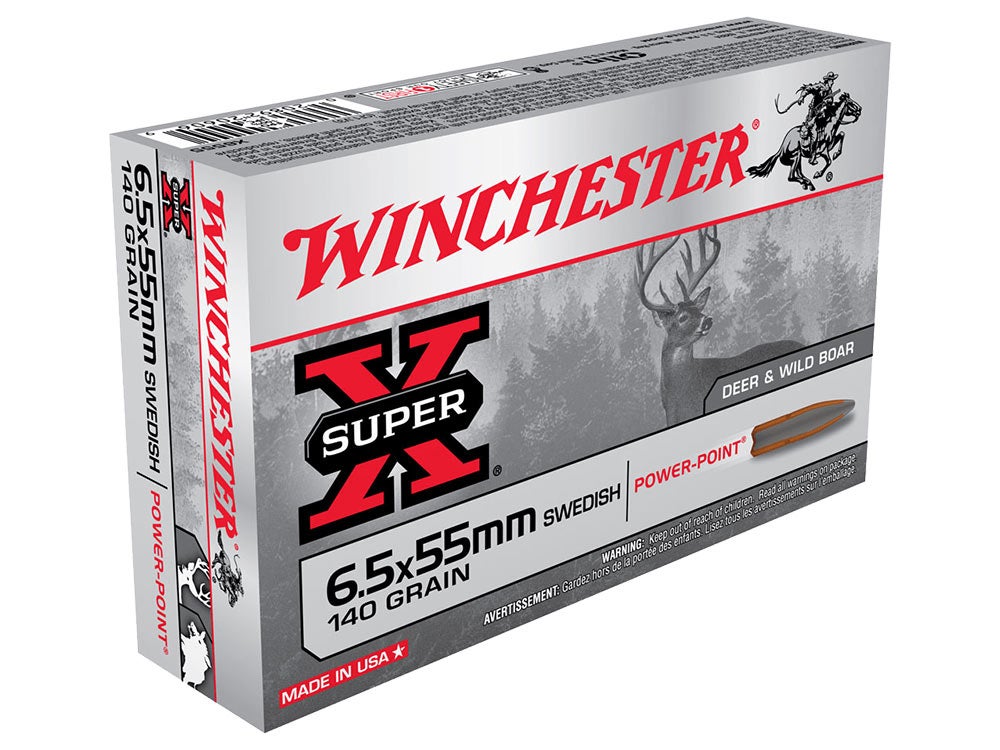 Back in 2005, I asked Melvin Forbes of New Ultra Light Arms to build me a Swede because I was looking for something of modest power and velocity that would not blow little West Virginia whitetails completely in half. Melvin did, and the rifle did not bisect the deer, and I believe it has taken 22 head of game with 22 shots. Such is the power of the Swede.

The Swede was developed between 1891 and 1893 by a joint Norwegian-Swedish commission, and the cartridge it came up with was surprisingly modern and very effective. So well did it do its job that it was kept in service from 1894 until 1995. The Swede is highly popular in Europe, and the Swedes hunt moose with it. When they shoot, the moose fall down. 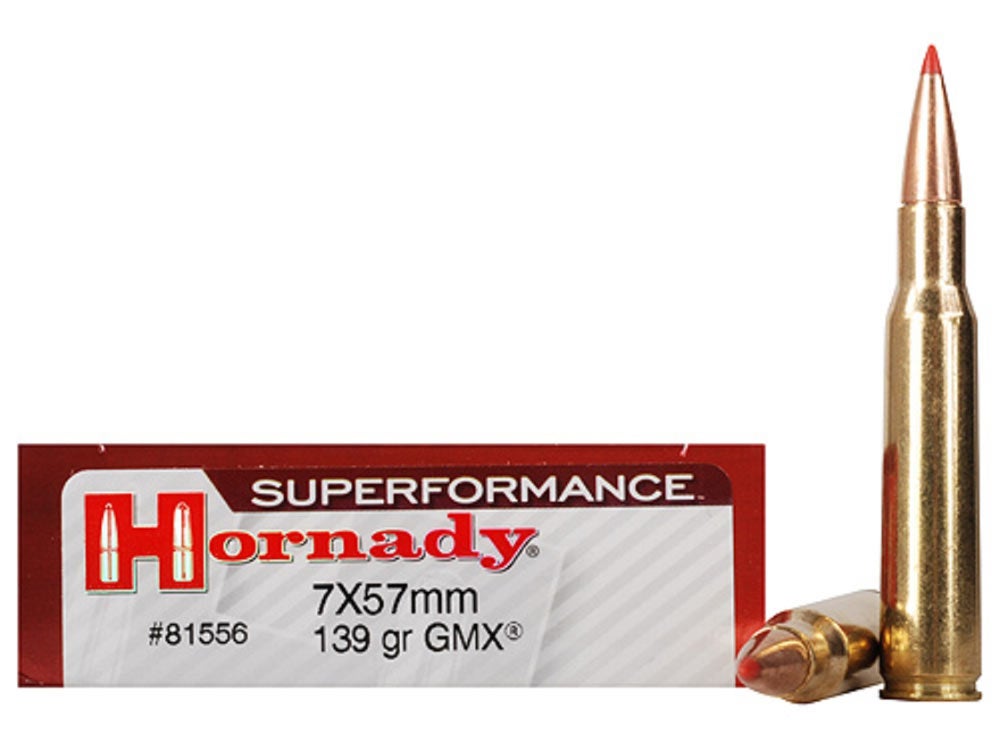 Now here is a conundrum. The 7×57 was developed by Paul Mauser in 1892 and adopted for military use. Since then it has been used in countless wars, rebellions, insurgencies, and armed conflicts of every sort, and proved itself beyond the shadow of a doubt. As a hunting round, it’s taken probably every game species on the face of the earth, and has served as both an elephant rifle and backup rifle in Africa. And yet it’s overshadowed by the 7mm/08 and hardly anyone chambers for it any more. Go figure.

This 7×57 is probably most popular with 140-grain bullets, but 160-grainers do extremely well, and for the biggest game there are 175s.

Two other notes: I’ve owned, I think, four 7x57s, and while they all shot OK, none of them shot really well. I have no idea why. Second, if you’re looking at a custom 7×57, exercise some caution. I once examined a beautiful built-to-order carbine in this caliber that would chamber only factory ammo loaded with 175-grain bullets. Who knows what went on there? 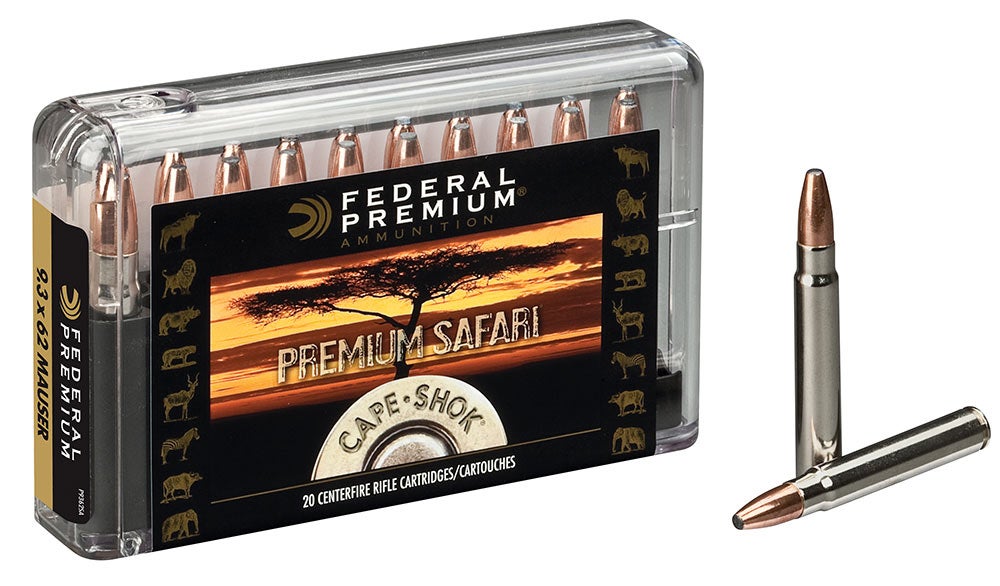 This cartridge has the gall to be metric, and very old, and obscure as well, but it’s having something of a renaissance because it also has some distinct virtues. The 9.3×62 is the invention of a gunsmith named Otto Bock who created it in 1905 for the German settlers who were then trying to steal parts of Africa, as opposed to the British, who had already stolen a great deal of Africa. These folks were looking for a cartridge that was suitable for large or dangerous game, would work through a standard 98 Mauser action, and did not cost a lot.

Herr Bock succeeded admirably. His original loading employed 285-grain (.366-caliber) bullets at a very modest 2,150 fps. In subsequent years, the bullet weight was increased by one grain and the velocity moved up to 2,400 fps. In either loading, it worked very well, and everyone thought very highly of it. You can think of 9.63×62 as a .375 H&H without the pain, or a .338 with heavier bullets. 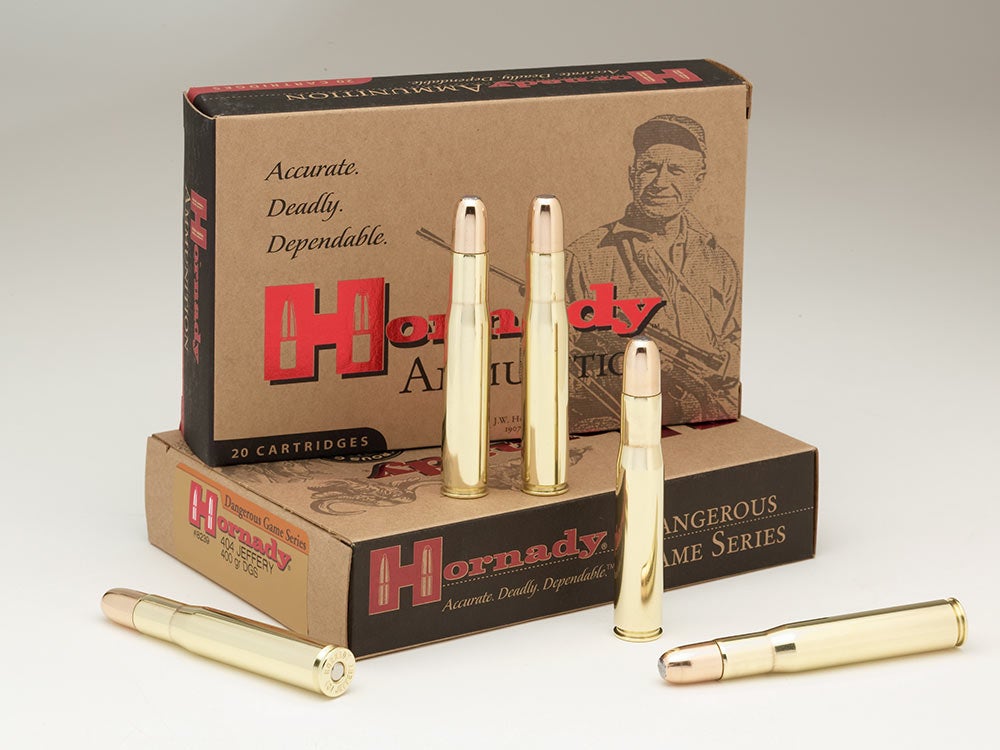 The Jeffery renaissance has resulted in ammo being loaded by Kynamco (formerly Kynoch), Hornady, RWS, and Norma. Most modern .404s, I’d guess, are custom guns. Two of them were among the most desirable rifles I’ve ever seen. One was by McMillan, the other was by Darcey Echols, and it broke my heart because it was (a) left-handed and (b) belonged to someone else. 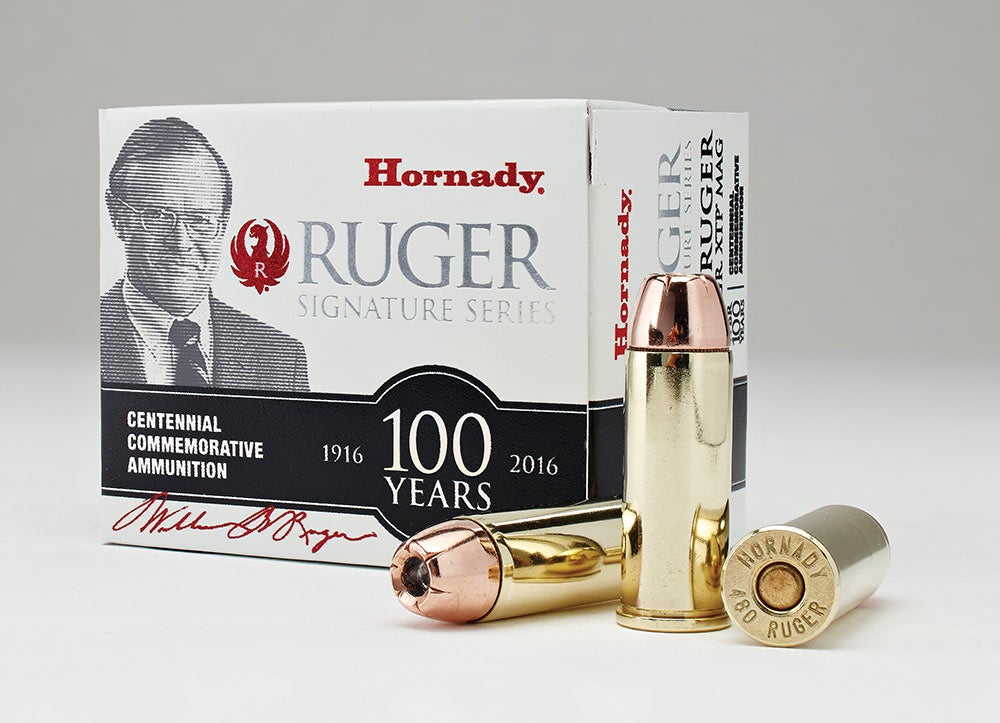 Introduced in 2003, the .480 has never been a big seller and, as far as I can tell from the chaos and rubble of the Internet, was discontinued at one point. It apparently was brought back into the Ruger lineup, and is one their website, chambered in the Super Redhawk D.A. revolver. This is good, because it is a very useful cartridge. It offers substantially more power than the .44 magnum without the carpal-cracking recoil of such horrors as the .454 Casull.

Ruger achieved this by using 325-grain .475 bullets, but at sane velocities and pressures. If you can shoot a .44 magnum without bursting into tears, you can shoot a .480. And in bear country, I would much rather have a .480. The only person I’ve met who got into a shooting match with a grizzly while carrying a .44 magnum found that it was not up to the job. If his client had not stood his ground with a .338 and shot accurately, they would probably be bear poop now.

I assume these are underrated. If not, apologies all around.

The Weatherby Mark V Accumark, the one that actually looks like a rifle. It does not look like military hardware, but on the other hand, you can hunt with it. The Accumark is a very high-class rifle, and it shoots like hell.

The Savage Model 99, rotary-magazine version. Why did Savage produce it for nearly 100 years? Because it works, son, to perfection. Some really nice ones are showing up at very reasonable prices.

The Remington 7600 pump action. It will do everything a gas gun will do except jam if you don’t keep it clean. Some of them are very accurate as well.

The Marlin Model 1895 .45/70 Guide Gun. You can hunt everything from ratty little deer to Cape buffalo with one, thanks to the astonishing variety of ammunition that’s out there. From what I hear, you’re better off with one that’s been around a while.

Custom Bolt-Actions. A great many of these rifles, which are virtually works of art, are now selling for the price of high-end factory rifles. Almost all of them are based on Mauser 98 or Winchester Model 70 actions.