This week the Texas Department of Agriculture announced it has approved a pesticide-based lure to target wild hogs. The approved... 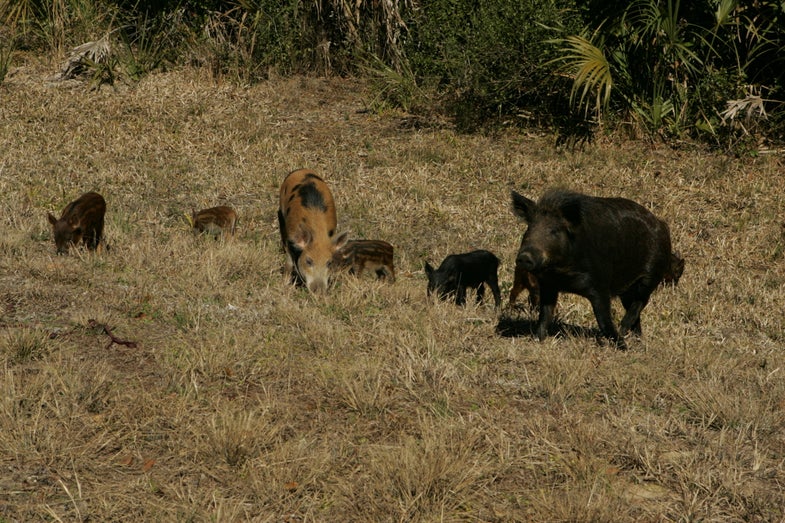 Feral hogs are considered a nuisance in Texas, where they adversely impact the environment.. U.S. Fish and Wildlife Service/ Flickr
SHARE

This week the Texas Department of Agriculture announced it has approved a pesticide-based lure to target wild hogs. The approved poison, Kaput Feral Hog Lure, is laced with warfarin, a drug that is deadly to swine when ingested, and it will be limited to state use only.

“This is going to be the hog apocalypse, if you like,” Texas Agricultural Commissioner Sid Miller told Fox News. “If you want them gone, this will get them gone,” In a statement, Miller said that a solution to the state’s pig problem is long overdue, and noted that the animal has caused extensive property damage.

Warfarin is currently used in other products, such as blood thinners and rat poison. But given warfarin’s low toxicity to most mammals and birds, along with its insolubility in water, the DOA feels it’s safe to use in strategically placed bait piles to reduce pig populations. Some locals, however, object to the state’s plan, and more than 1,200 signatures have been gathered in opposition.

“If this hog is poisoned, do I want to feed it to my family? I can tell you, I don’t,” Eydin Hansen, vice president of the Texas Hog Hunters Association, told CBS Dallas. “If a hog dies, what eats it? Coyotes, buzzards. …We’re gonna affect possibly the whole ecosystem.”

In a statement to CBS Dallas, the Texas DOA stressed that, to reach toxic levels, non-targeted animals, like livestock and pets, would need to ingest extremely large quantities of warfarin for several days. For humans, the meat of poisoned hogs is also considered safe to eat. A person would need to consume more than 2 pounds of hog liver—where the pesticide is most concentrated—to achieve the same exposure given in therapeutic doses of the blood thinner. Moreover, hogs that have consumed the pesticide will have blue dye in their fatty tissue. The more warfarin present in a pig, the more the blue dye will be visible in its meat, which might explain the wild hog with cotton-candy blue fat killed on a California ranch in 2015.

Fox News reports that Louisiana has also considered legalizing the pesticide, but fears that the bait could inadvertently be eaten by black bears and other animals.

RELATED: What Role Do Hunters Play in the Fight Against Feral Swine?