We call them the Frog Kings. Every summer Tim and Rodney—two old-timers who live on an undisclosed river up North—sock... 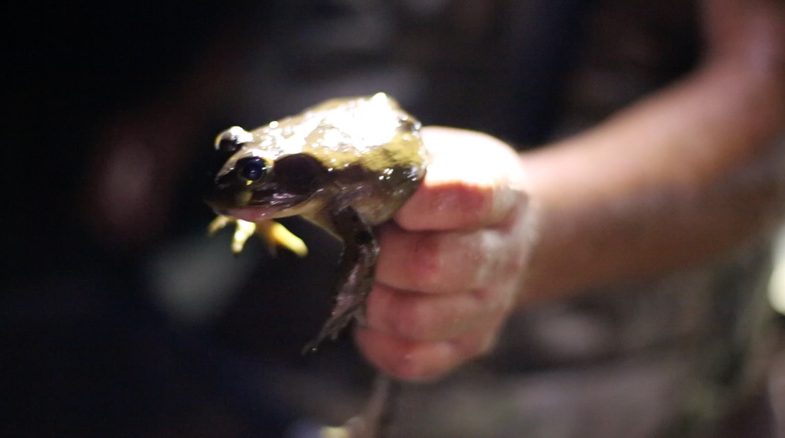 We call them the Frog Kings. Every summer Tim and Rodney—two old-timers who live on an undisclosed river up North—sock away hundreds of pounds of frog legs, one freezer pack at a time. They go out after dark, on the hottest summer nights, floating the river in Frogzilla, a 14-foot plastic canoe.

The Frog Kings by FieldandStream

Here’s how Tim and Rodney are keeping the lost art of frog gigging alive.

Spear, Paddle, or Grab? by FieldandStream

Tim and Rodney call the spear “the devil’s tines,” and the paddle “ the .22 magnum.” The grab is, well, just “the grab”—but it’s deadly all the same. Each tool has its time and place, but 90 percent of the frogs we caught my night on the river were taken by hand. “I like to look at ’em,” Tim said. “Before, you know…”

Get a Real Spear

Get a Real Spear by FieldandStream

That cutesy three-tined, 2-inch frog gig in your boat? Throw it away. Get a real spear and you’ll never lose another bullfrog.

How to Fish for Frogs

With a hunting license, most states let you shoot frogs during the day. But with a fishing license, you can use a rod and treble hook. Though shooting frogs is fun, it’s easy to damage the leg meat and ruin any chance of dinner. Tim and Rodney have mostly given up the gun. “We don’t frog much during daylight,” Rodney says. “But when we do, we fish ’em.”

How to Clean Frogs

How to Clean Frogs by FieldandStream

Cleaning frogs is easy. That’s especially good news when 126 bullies are waiting on the bait station. The key is having a pair of sharp shears and pliers, and a good knife. Tim and Rodney work as a team. With the shears, Tim zips the frog in half above the pelvis. Then with the pliers, he grabs the back skin just above the remaining stub of spine and peels it toward the toes. Rodney cleans up the feet and cuts each leg off at the pelvis, just above the thigh, because, he said, “We don’t eat crotch.”

Frog legs cook just like chicken, so, naturally, one of the best ways to prepare them is barbecuing them on the grill. Tim and Rodney set the legs over a medium flame on a piece of tinfoil, since the soft, white meat tends to stick to the grill grate. The legs are best served hot, but I defy anyone to tell the difference between a cold, day-old frog leg and yesterday’s chicken wings.

The morning after our all-night hunt, Tim whipped up a batch of breakfast frogs. The legs were rolled in pancake batter, deep-fried, and served hot with maple syrup. They were delicious, and tasted sort of like French-toast sticks with a side of badass.