Everything You Need to Know About Subsonic Ammo

Subsonic cartridges are quieter, but hardly silent. Here’s where they falter and where they shine 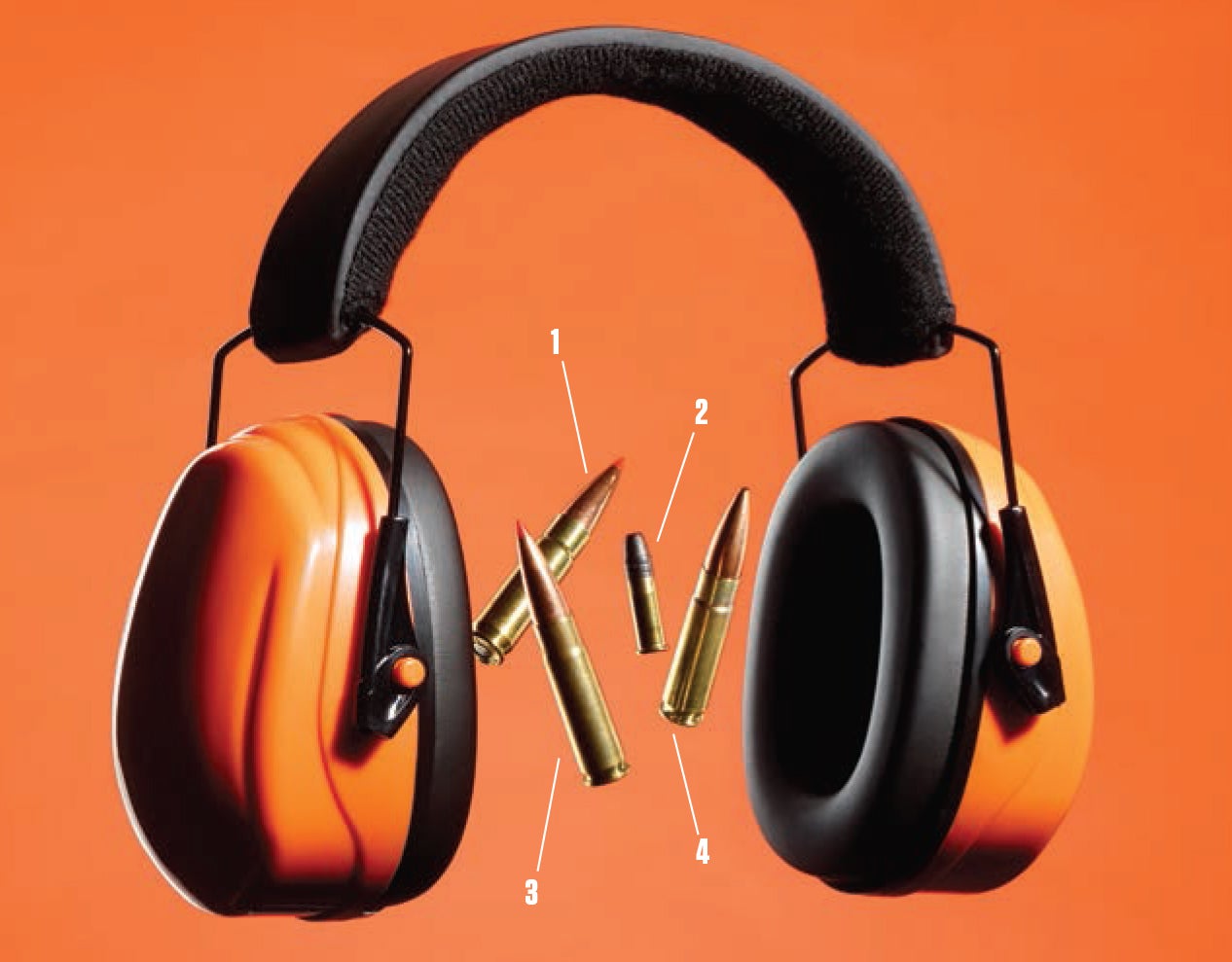 The label on the ammo box says subsonic, so this stuff won’t spook every deer in the county like your earth-shattering aught-six does, right? Well, sort of. Subsonic cartridges do produce less noise than full-velocity rounds, but there’s no free lunch—as usual. Your rifle will still go bang, and none of this quieter ammo is powerful enough for hunting big game much past slingshot range. Still, subsonic ammo does fill an important niche for many hunters and shooters.

What is Subsonic Ammo?

At sea level, the speed of sound is roughly 1127 feet per second. When a moving object, such as a bullet, breaks that threshold, there is an audible shock wave that sounds like the crack of a bullwhip. Most of the noise inherent with shooting a rifle, however, comes not from the bullet breaking the sound barrier, but from expanding gases rapidly escaping the rifle’s bore. It’s the latter bang that causes hearing damage, reveals shooters’ positions, scares game, and works Mrs. Walney down the road into a fit of agita. So while subsonic ammo does eliminate the downrange crack, and does reduce the bang at the muzzle somewhat due to its lower velocity, it won’t make your centerfire rifle sound like mouse feet on felt. It’s just one way to mitigate the noise.

Another way is to buy a silencer (legal in 39 states), which will greatly muffle those escaping gases. Quietest of all is to use a silencer in tandem with subsonic ammunition, which can reduce the sound of gunfire to a whimper in the rain. But if all we wanted was quiet, we wouldn’t pull the trigger at all. There’s still the question of performance, which is significantly hampered by going subsonic.

Since energy is the product of mass times velocity squared, a slower bullet has exponentially less energy than a faster one of the same weight. Take your average 55-grain .223 Rem. bullet. At 3250 fps, it produces 1,280 foot-pounds of energy at the muzzle. But if you reduce the velocity to a subsonic 1100 fps, it produces only 150 foot-pounds. In other words, it turns a .223 Rem. into a .22 LR—the difference between a load for deer and a load for prairie dogs. This is one reason why you rarely see subsonic .223 loads on shelves. The other is because a lack of energy going forward equals a lack of energy going backward—and so they can fail to cycle semiautomatics.

To compensate for less velocity, you need more mass. That’s why rounds with long, large-­diameter bullets like the .300 AAC Blackout (which function well in modern sporting arms with a simple upper receiver swap) have become the preferred subsonic centerfire round for sportsmen, as well as for the military and law enforcement. It should be noted that these long bullets are most accurate when fired from barrels with fast 1:7 twist rates to stabilize them at subsonic speeds.

Hornady’s 300 BLK subsonic 208-grain A-Max load, for example, delivers 480 foot-pounds of energy from a carbine’s muzzle. Think .45 ACP. But because of this long bullet’s incredible ballistic coefficient of .648, at 500 yards it surpasses the energy of a full-power 55-grain .223 Rem., and nearly triples the .45 ACP, and it does so in a hushed tone. That’s marginal performance for deer and hogs beyond 50 yards, but it’ll do the job on longer-range varmints where noise is an issue. This type of load is ideal for home defense, where shots are measured in feet and taken in tight confines that exacerbate hearing danger. At the very least, this ammo is a hoot to shoot on the range thanks to its mild recoil and low noise. It’s like shooting a rimfire but with more punch.

Speaking of which, rimfires are where subsonics really shine. A standard .22 LR load delivers around 1200 fps and 140 foot-pounds of energy at the muzzle. The typical subsonic .22 LR offers around 1050 and 100, respectively, a negligible difference to any rabbit. So while the energy to cleanly kill small game remains, the downrange crack vanishes. And as smallbore competitors know, subsonic .22 LRs are more accurate than supersonic .22s because they exhibit 37 percent less wind deflection due to the disproportional increase of air resistance near the sound barrier. When subsonic .22 LR ammo and a suppressor are combined, you’ve got a whisper-quiet, deadly accurate small-game firearm.

All the major ammunition manufacturers offer subsonic .22 LR loads. CCI’s Subsonic HP, for example, reduces velocity to 1050 fps and therefore lowers the decibel level to around 68, almost half the normal high-­velocity .22 LR load. (Any .22 Short cartridge will accomplish the same thing, if your gun will shoot them.) However, subsonic rounds may have trouble cycling the actions of semi­automatics reliably. If you shoot a ­single-shot, pump, or bolt-action rifle, you’re good to go. If you shoot a semiauto, try Winchester’s new M-22 Subsonic .22 LR, which fires a 45-​grain bullet at 1090 fps and is designed specifically to work with self-loaders. In any case, with subsonic ammo, your rimfire will still be hard on game but easier on the ears. ––Jeff Johnston

Read Next: 12 of the Best .22 LR Ammo Choices for Hunting and Competition

How to Make Your Own Subsonic Ammo for Deer and Hogs

With most modern smokeless powder, it’s generally not safe to underload high-power centerfire cartridges like the .270 or .308 so much that their projectiles move slower than the speed of sound. You need to use something else: namely, Hodgdon Trail Boss. Introduced just over a decade ago for cowboy-action shooters who wanted to shoot really light handloads, Trail Boss is an extremely bulky powder, which lets you fill large volume cases with a less-powerful charge. For years, it has worked perfectly for loading revolver cartridge cases to full capacity for safe, light-recoil reloads. Now, with noise reduction in vogue, savvy handloaders are learning that it works just as well in centerfire rifle cases.

Trail Boss powder is so bulky that you can safely fill an empty centerfire case to the neck-shoulder junction, top that charged case with a bullet of correct diameter, and go try it out. Even with a case full of Trail Boss, the bullet won’t break the sound barrier, and you’ll be amazed at how stealthy your favorite deer rifle suddenly becomes.

The Best Uses for Subsonic Ammo

The main benefit of subsonic centerfire rounds, when combined with a suppressor, is obvious enough: They’re quiet, making them ideal for suburban deer hunting, for discreetly trimming wild hog populations, or for quietly knocking back the coyote numbers on your deer lease. Granted, these loads have a maximum effective killing range of about 100 yards, but most whitetails and hogs are taken inside that distance.

A less obvious benefit of these loads is reduced recoil. When you push bullets more slowly, they don’t push back so hard, making them perfect for practicing with heavy-kicking guns or for getting young hunters started with a big-game centerfire rifle.

Read Next: 12 Deer Cartridges for the Recoil Sensitive

How to Choose the Right Bullet for a Subsonic Load

Only one fly plagues the quiet-ammo ointment: Projectile choice for subsonic game loads is limited. Bullet expansion is critical for quick kills, especially on larger animals like deer and hogs. Most deer bullets won’t expand when fired at 1100 fps or slower. Traditional round- and flat-nose bullets with a lot of lead exposed at the tip do O.K., but the best of the lot are Hornady’s FTX bullets. Available in .25, .30, .32, .338, .35, and .458 caliber, they are engineered for vintage lever-action cartridges and expand reliably at very slow velocities.

In any case, use a bullet with a crimping groove. Because of the fluffy nature of Trail Boss powder, ignition is more consistent and propellant burns more completely with a crimp.

As a general rule, heavy-for-caliber bullets work best because they do a better job of retaining a subsonic round’s reduced energy downrange. However, if your rifling twist rate doesn’t spin bullets fast enough at subsonic speeds to stabilize long, heavy bullets, you’ll get better precision with lighter projectiles. If that’s the case, experiment until you find the heaviest bullet that shoots well. Also, subsonic rifle ammo probably won’t cycle your AR-15, Browning BAR, M1A, or other centerfire semiautomatic rifles. Not to worry—just run them like a straight-pull bolt action.

Finally, bullet trajectory will be vastly different with subsonic ammunition, so be sure and check your zero and test the point of impact out to 100 yards or so. Once that’s done, you’re ready to pop pigs, predators, and deer with more stealth than ever.

Because of the low impact velocity of subsonic bullets, they often don’t expand dramatically on game. Changing your shot placement to contact bone can help. Aim at the shoulder, halfway up the body or a shade more, to hit the scapula, which will aid bullet expansion. You’ll destroy both lungs, and meat damage will still be minimal because of the modest impact speed. This shot also allows room for error: Miss a little high and you’ll clip the spine, low and you’ll heart-shoot your deer. ––Joseph von Benedikt