How to Hunt Big Bucks in Extreme Weather

Bad storms can create big-buck habitat overnight. Here’s how to hunt it 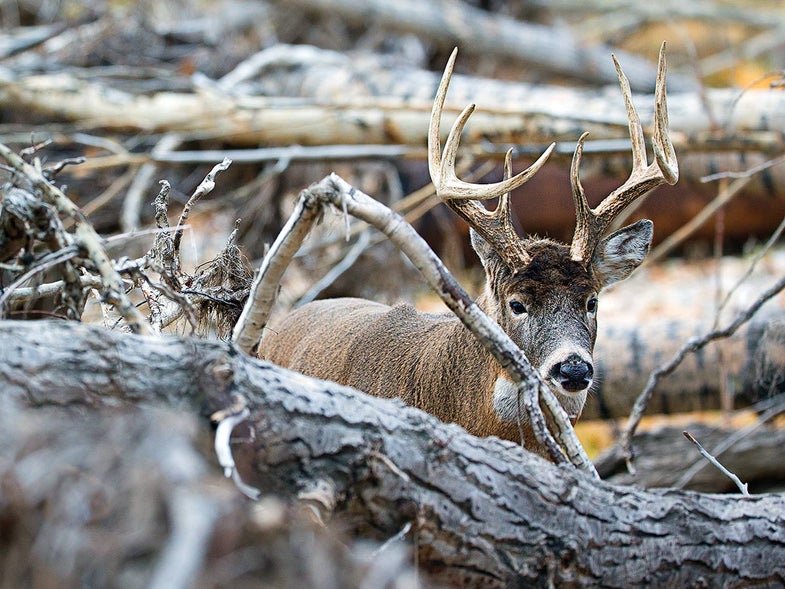 I know big deer like thick cover, I remember thinking, but this is ridiculous. A snake couldn’t slither through this.

Seconds later a raucous commotion erupted as a buck with tall, white antlers materialized, bounded over the fallen logs, and vanished deep into the jumble of toppled trees, shrubs, and greenbrier.

That was my first exposure to how landscapes ravaged by extreme weather can become big-buck hotspots. I vowed it wouldn’t be my last. In fact, shortly after that public-land encounter, the remnants of Hurricane Isabella struck the 117 acres I live on, toppling dozens of huge trees and creating superb deer cover right out my back door.

Areas damaged by tornadoes, hurricanes, and tropical storms may initially look impenetrable by man or beast. But gaze closely and you’ll find many of them actually have narrow paths bucks have somehow teased out through the tangle of tree trunks, branches, shrubs, and briers. Dig further, and you’ll likely discover beds.

You’ll rarely see smaller doe and fawn beds in such areas, I’ve found. The going is just too rough for their tastes.

But these spots are perfect as part of the core home area for either a single reclusive buck or a group of bachelor bucks, with super-thick bedding cover seldom penetrated by humans. And that’s just how you should leave them: undisturbed, except for brief scouting forays. Do that, and these massive logjams will also become prime late-season escape destinations for other bucks when hunting pressure builds.

Thick cover isn’t all that deer will find. The new habitat offers a bounty of foods, without the hunting pressure bucks encounter on food plots, cropfields, and orchards. The menu starts with branch tips of the downed trees and their plentiful twigs, buds, and leaves. Depending on when the extreme-weather event struck, hard mast may add to the buffet. I hunted one spot where all the white oaks with ripe acorns were suddenly toppled at once during a major September storm. That place was littered with nuts—and bucks.

A fallen tree may also retain some attachment to the root cluster, allowing it to live for a while in a horizontal position and provide additional green forage, essentially like an enormous hinge cut.

As this initial cornucopia dwindles, a new explosion of low-growing edible plants takes off from sunlight suddenly penetrating to the forest floor. Blackberry, greenbrier, forbs, and saplings all enhance the attraction of storm-damaged areas.

The food and cover are so appealing that some bucks may virtually never leave. But most do at times to sample varied forage, establish dominance in the herd, and participate in the rut. That’s your chance.

Be a Storm Tracker

When you first visit your ­tornado-​ravaged site, you’ll see that some parts will be impene­trable, even by deer. That actually helps concentrate the quarry for you. Get a satellite photo of the property or make a sketch, and start walking. Mark locations where bucks have entered the damage zone and left tracks, droppings, scrapes, or rubs.

Once you have one entry point, try to pinpoint another nearby, perhaps 100 to 200 yards away. Bucks like to have both a front door and a back door for quick escape.

You can simply stop here and hang a stand. Alternately, use trail cameras to try to pin down which bucks are using these areas and when. I usually avoid extra disturbance and simply hang my stand downwind of the best entry point.

Stay all day if possible. Deer could be pushed toward the cover at any time.

Some areas devastated by tornadoes or hurricanes are so thick that deer cannot penetrate them to use as bedding sites. These spots can still provide good hunting, though, because the borders will butt up against the open woods—classic edge habitat.

Deer will find food there from the downed tops spilling into the open woods. Most important, the mass of trees forms a blockade and creates a natural travel corridor, channeling the animals’ movements along it. This edge trail can pay off anytime bucks are moving, whether heading out to feed or chasing does.

During the mid- and late seasons, you’ll be waiting for resident bucks gravitating back to the tornado site to recuperate after the rut. But you’ll also be watching for transient bucks, which have home ranges in other areas but use the thick storm-site cover to escape heavy hunting pressure.

The setup is similar to the bed hunt, only this time you’re also looking for these “outsider” deer bumped by other hunters. Find the closest access to the storm-damaged site near areas with heavy pressure. Then loop in to avoid disturbance and arrive before daylight. Stay all day if possible. Deer could be pushed toward the cover at any time.

I’ve always favored lung shots with rifles, but as I learned through an almost heartbreaking experience, shoulder shots are often preferable when you’re hunting tornado-decimated habitat. When I squeezed off the lung shot on a heavy 9-pointer that day, I anticipated that if it ran, it would continue the way it was headed—toward the open woods.

Instead, when the bullet struck, the big buck whirled around and bounded farther back into the tangle of mangled trees and brush. It was a gut-wrenching, hours-long tracking job, but luckily, I found the deer piled up 80 yards away, nearly totally camouflaged in a tangle of branches.

If you catch a buck 50 to 100 yards away from the cover, a broadside lung shot should do the trick. But after that experience I only take shoulder shots on bucks inside or near storm-ravaged areas. The thick tangle of logs, roots, and shrubs makes finding the quarry extremely challenging. And some areas are so thick, you simply cannot get to them.

Connecting with the shoulder (which should also impact lung) makes it almost impossible for the buck to jump over fallen trees after the shot. Aim for two-thirds up, or the middle of the shoulder if you have to shoot quickly. Bucks hit there will typically drop instantly or run just 30 to 40 yards.

Deciding whether to take a bow shot is more complex. It’s a judgment call based on your experience, draw weight, broadhead, and shot angle, and also where the deer is in relation to the thick cover. Err on the side of caution—a mature buck is too precious a resource to risk hitting and not being able to retrieve him.