Statues, bridges, and gun springs all give out eventually. Why not take precautions? 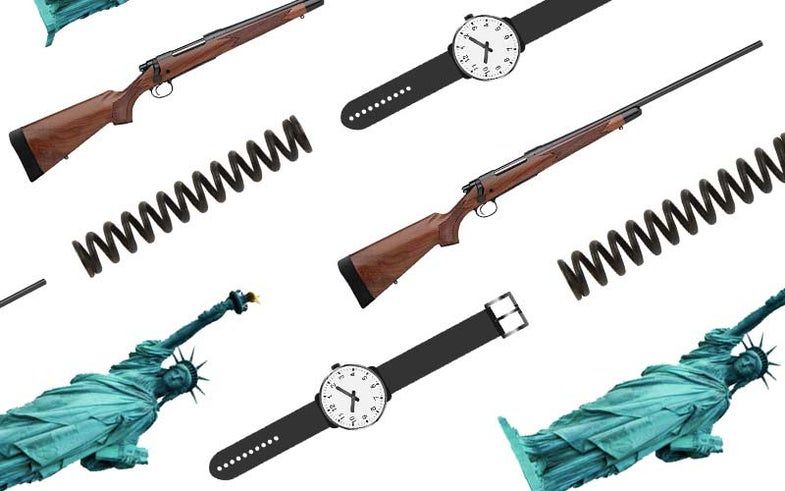 The comments on my post of 9/21 on spring fatigue and literary hokum were especially interesting, particularly those of Daniel M., who in addition to being a writer of some wit and vocabulary (“Canard” in a gun blog? My God, what is the world coming to?) has apparently had some training in engineering.

He uses the Statue of Liberty of one example of a structure under load, like a cocked spring, that has obviously not collapsed. True enough. But the great bulk of the Statue of Liberty is copper sheeting, and I don’t know of any springs that are made of copper. Are they the same under stress? Also, between 1984 and 1986, the Statue was closed down, and its iron and steel framework was replaced and repaired because it was in danger of collapse.

Bridges were another example. Granted, they don’t have to be propped up every night, but they, too, give out. The most recent example is the Tappan Zee Bridge, which spanned the Hudson River. It was opened in 1955 and lasted until 2017, when it became so cracked from stress and vibration that it was deemed unsafe and replaced by a new bridge. (Also, is it valid to compare a steel gun spring, which weighs a fraction of an ounce, to a steel bridge component, which can weigh many tons?)

Watch springs give out. The watch that I got when I graduated college had a mainspring that lasted from 1963 to 2015. It was left unwound almost all of the time, but it died all the same.

The premise that a steel spring will never fail if it’s not overloaded is based on the assumption that nothing is wrong with the spring. In real life, there are plenty of bum springs in guns.

In 2005, I had to replace a dead Savage firing-pin spring that was 10 years old and had never been left cocked. Since 2013, I’ve tested two new rifles that would not set off primers at all, or had a 50 percent rate of failure. (A Tikka Scout rifle took a different approach to the problem by arriving minus its firing-pin spring.)

The little spring that controls the floorplate release on my Remington 700 .30/06 lasted from 1996 to 2013. Then I had to replace it. I’ve tried two rifles that would not set off the primers in M118 tactical 7.62 ammo. Even the unstoppable AK-47 requires replacement springs, as does the M4.

All springs die eventually. If you leave them under tension, you’re very likely going to shorten their lives, which may be limited to begin with.

Or maybe not. Do you really want to find out the hard way?

And: Today, one of my fellow Mid-Range shooters showed me a 3-shot practice group he fired at 600 yards. It could easily be covered by a dime. He fired it with an F-Open class rifle chambered for the 6XC, a .22/250 necked up to 6mm, and Berger 105-grain bullets. His scope was set at 42X. He is a High Master shooter, and holds a number of national records, but he admits that it may be a long time, if ever, until he does something like that again.