His son's sunfish tipped the scale at a whopping 5 ounces 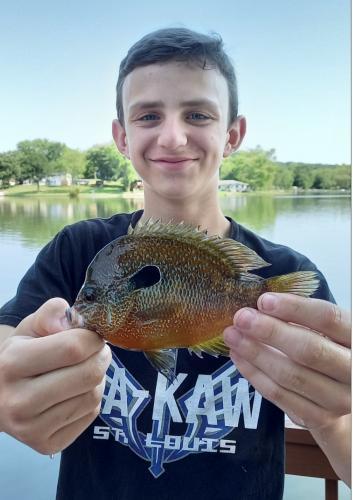 No record-holding fisherman has to like the idea of losing their place in the books. But, if it has to happen, who better to claim the crown than your own son? That’s the latest fish story being told inside the Audrain household.

The coincidences don’t stop there: RJ caught his 5-ounce record fish at the same private pond and on the same day, July 3, as when his dad handlined his record sunfish back in 2020.

“We were at the lake fishing all day and having fun,” RJ told the MDC. “I was using my handline and after about five minutes of trying, I pulled out the fish. I’m really proud of myself and pretty competitive, so it’s cool I beat my dad’s record.”

RJ says he plans to have his sunfish mounted so he can hang it on the wall at home—right next to his dad’s fish.

“We were actually joking that it would be funny if we had a new record on the wall each year that is an ounce bigger,” RJ told the MDC. “I think we’re definitely going to keep trying to break our records.”