Golf, as the famous saying goes, is “a good walk spoiled.” Upland hunting—so long as there no lost nor injured... 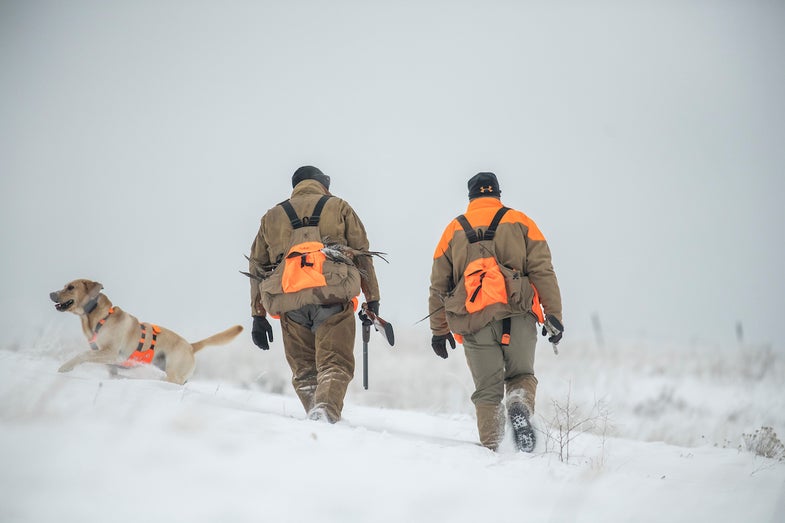 A pair of pheasant hunters on a long, winter walk.. John Hafner
SHARE

Golf, as the famous saying goes, is “a good walk spoiled.” Upland hunting—so long as there no lost nor injured dogs nor other calamities—is a good walk regardless of what happens. That’s why I like it so much. Even if nothing happens, at the end of the day you’ve gotten your exercise. I used to hunt with a very fit law student, who was also a competitive cyclist (law students are competitive about everything, so maybe that’s a redundancy). Anyway, one day after a long afternoon of chasing pheasants he remarked: “Most hunters can’t do what we just did. They drive to their deer stands and sit. They can’t walk like this.”

At the time I didn’t think much of the walk, because I was 20 years younger than I am now. Maybe he had a point, although I still don’t think that pheasant hunting is “hard” so much as it is pleasantly tiring.

On the other hand, a couple of weeks ago I spent two days hunting grouse and woodcock in Minnesota. The terrain was flat, the elevation was low, and I never thought of grouse hunting as that taxing before, but we spent all day both days busting through thick stands of skinny trees, with the occasional swamp in the mix, a couple of which I fell into. Sometimes we had to go at the double-quick, if the dogs were after running birds. It beat me up pretty badly.

In terms of physically hard upland hunts, though, that grouse hunt ranks behind hunting wild chukars. I have done very little chukar hunting, but my impression is that they all live on steep slopes made up entirely of loose volcanic rock.

Mearns quail hunting, which I got to try in Arizona a few years ago, was described to me by an experienced big-game hunter who had tried it as “like an elk hunt.” I am not sure it was quite that hard, and we were at 4,000 feet, not 10,000 (I live at 690 feet, so I notice thinner air at almost any elevation) but by the end of the first day we had walked nearly 15 miles, much of it steep hills made up of rocks and crumbling dirt. While I answered the bell for day two, I was glad there wasn’t a day three.

And that’s all good, because what doesn’t kill you makes you stronger, or at least it helps you sleep soundly after the hunt. But, you can become too intent on following the dogs through the cover, and on tough hunts, you get tunnel vision and sometimes lose the forest for the trees. I have to make myself stop and look around every once in a while, to take a minute to appreciate the landscape, whether it’s gently rolling farmland, a stand of poplars, or a rocky hillside. Failure to stop and smell the roses is the only way to spoil the good walk that is an upland bird hunt.