Velvet Shed: The First True Stage of the Rut

Three reasons why the event, and its immediate aftermath, changes everything for bucks 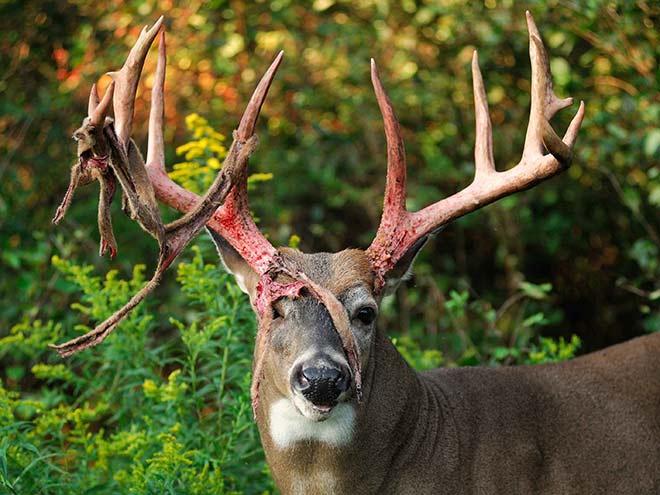 The rut gets all the ink for craziness, but shedding velvet comes in a close second in terms of shaking up a buck’s world. While the process of shedding is short-lived—it takes only a day or two for most bucks, and some will have clean antlers within a matter of hours—the event signifies a whole new phase for whitetails. Here are three key things that happen when bucks reach hard antler, and how to deal with them.

Peak breeding may seem like a dot on the horizon, but velvet shed is actually the first stage of the rut. As soon as antlers harden, testosterone levels start building, and bucks start ritual behaviors associated with the rut.

What changes: Bucks are highly protective of their antlers in velvet, but they start rubbing once the fuzzy stuff is gone. Research proves that mature bucks are the first to begin making rubs each fall, but don’t expect to find the kind of gargantuan rakings on thigh-thick trees you’ll see a month from now. Even the biggest bucks will make early rubs on small saplings. The season’s first tentative scrapes will also appear.

Your move: Scout the edges of hot food sources for the season’s first rubs and scrapes, and set up stands near the freshest sign. Also, mock scrapes are highly effective now; not only will they draw bucks near stand sites, but they’re excellent places to hang a camera and gather intel.

Summer bucks live in seeming harmony, but make no mistake: There’s a dominance hierarchy, even though bucks won’t risk injuring velvet-covered antlers to decide it. Instead, bucks merely posture, paw at, and bump each other to establish a pecking order.

What changes: Once bucks reach hard antler, it’s time to revisit the Who’s the boss? question. I’ve watched many seemingly mellow velvet bucks turn into absolute brawlers once they realize they have weaponry on their heads. Sparring is very common right now, and it’s not unusual for some knock-down-drag-outs to occur.

Your move: Keep your rattling antlers handy and don’t be afraid to use them. I like short, light rattling sessions that mimic the sparring matches that are going on now. I’ve rattled in as many as five bucks in a single September evening.

Late-summer buck gangs are known for finding a favorite food source, bedding a fairly short distance away, and revisiting their chosen salad bar with regularity. Bachelor groups in the double digits can occur, all living as a mostly harmonious unit.

What changes: While some post-velvet bucks will remain buddies, others avoid the stress of fighting and competition for food by abandoning their summer­time pals. This is especially true of older bucks, which often shift their core area and turn into sulking loners.

Your move: Print an aerial view of your hunting area and mark locations where you saw a good buck most frequently in summer. Then study the photo and look for likely bedding cover—ridge ends, clear-cut edges, abandoned farmsteads, brushy fencerows—within a half mile of that summer core. Visit those areas at midday and scout for rubs, small scrapes, and big tracks. If you’re not convinced that the buck leaving the sign you find is a good one, hang a trail cam. You might be surprised.