When the summer heat makes Montana trout fishing kind of a grind in the Bozeman area, local guides and anglers... 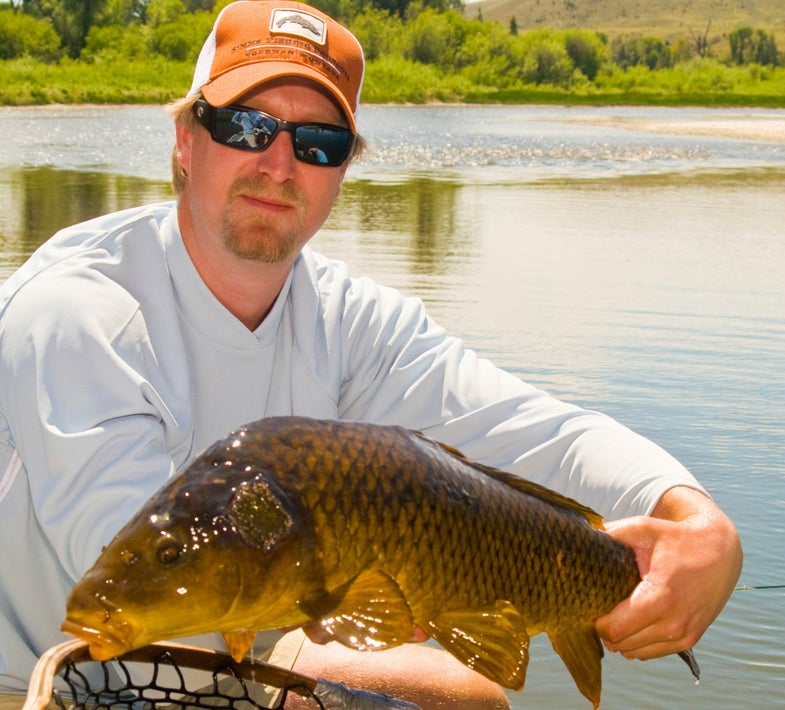 When the summer heat makes Montana trout fishing kind of a grind in the Bozeman area, local guides and anglers in-the-know don’t waste time trying to fool 12-inch rainbows when the Missouri River is loaded with 10-plus-pound carp. If you think carp are easy to tame on the fly, think again. They are stubborn and stealthy and grab and spit a streamer before you can blink. But when you connect, it’s backing city and a sizzling reel. In this episode, “Hook Shots” host Joe Cermele gets schooled in this tricky, unique fishery.

The Deal: According to guide Peter Vandergrift, chasing carp on the fly is what Montana trout guides do on their days off. Trout will always be king in Montana, but during the late summer months when the action lulls, the carp in the Missouri River not far from Bozeman are always big and plentiful. But don’t think carp fishing is easy. You’ll see hundreds if not thousands during a float, but of those, 20 might present the perfect shot. They can’t be too deep, they need to be actively feeding, the fly has to land right on their nose, and it can’t be moving too quickly. Catch six fish and you’ve had a pretty good day. Carp fishing the Missouri is easily comparable to redfishing on the salt flats, though we’d argue it’s far more challenging.

When to Go: Stalking river carp in the shallows is a mid- to late-summer game in Montana. These fish file out of Canyon Ferry Lake near Helena en masse when the weather gets hot and stay put until the fall when the migration moves in reverse. Mid-July through August is the peak of the carp season on the Missouri.

What to Bring: The carp average five to eight pounds, with plenty of ten- to 12-pound bruisers in the mix. At minimum, fish a six-weight fly outfit, but anything more than an eight-weight setup is going to be overkill. As the carp you’re most likely to catch are going to be in skinnier water, there is no need for sink tips or sinking line. Weight-forward floating line and 1X or 2X leaders and tippet get the job done. Local fly shops in Bozeman sell dedicated carp patterns with dumbbell eyes and rubber legs, though wooly buggers, Zonkers, and sculpins in brown, black, or olive work just as well.

How to Fish: Vandergrift likens carp fishing with a fly rod to quail hunting. “You don’t want to just cast into a pod of carp and hope one eats the fly,” he says. “Pick out one fish and target it specifically.” Ideally, that one fish will be in water no more than two feet deep and it will be actively grubbing the bottom. Adding a small strike-indicator to the leader will help you detect subtle taps. Carp have a habit of quickly sucking in the fly and spitting it out just as fast. Success rates climb when you can actually see your fly and see the take. However, they spook easily, so you want to cast to fish well downstream to avoid getting right on top of them.

Where to Fish: We filmed this episode on the section of the Missouri between Toston and Townsend, Montana. It’s wide and fairly slow and offers ideal carp water. Though many anglers float this piece of river, you can just as easily wade in at any of the public camp grounds and float-boat launches along State Road 287. If you do wade, keep to the banks to avoid spooking fish. Fishing from elevated banks will help you spot more carp and get more shots.

Where to Stay/Guides: There are plenty of inexpensive chain hotels and motels in near-by Bozeman, as well as a few in the town of Three Forks, which is not far at all from this stretch of river. Too book Peter Vandergrift or any of his other excellent guides, visit gottroutoutfitters.com or call (406) 240-3086.