The muskie is the one fish that has been the bane of “Hook Shots” host Joe Cermele. Try as he... 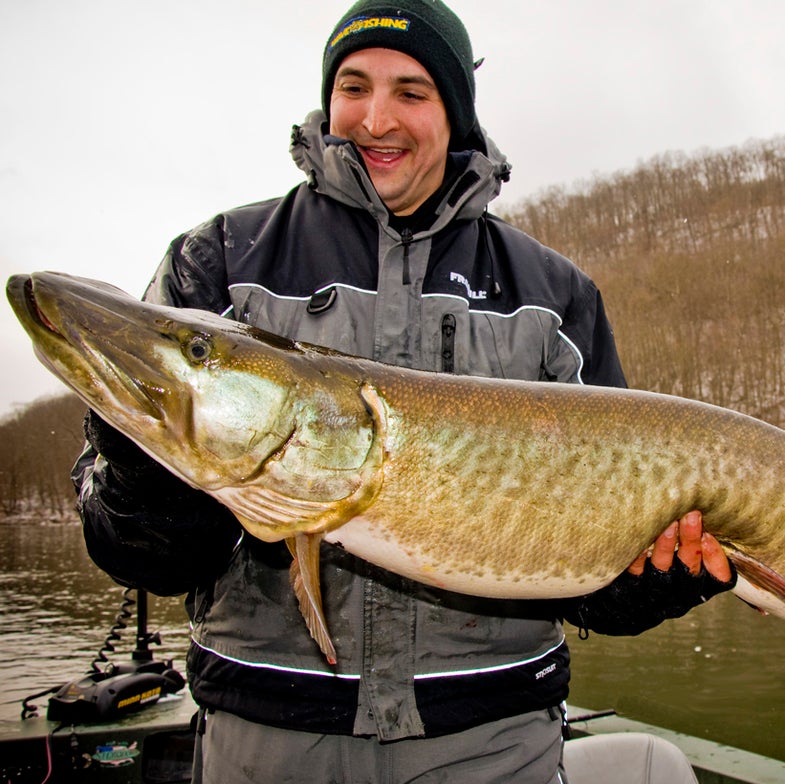 The muskie is the one fish that has been the bane of “Hook Shots” host Joe Cermele. Try as he might, he has yet to catch one, let alone capture one on video. When it was time to make one final road trip in 2011 for “Hook Shots,” Cermele could have gone somewhere warm, but he decided to pony up and take one last stab at the member of the Esox family that has eluded him thus far. Find out if legendary guide Red Childress helped him end the year on a high note on the Allegheny River in Northwest Pennsylvania with a big December ‘skie.

The Deal: The first 80 miles of the Allegheny River below the Kinzua Dam in Northwest Pennsylvania are known for holding fat walleyes, big smallies, and monster brown trout. But perhaps no species is chased more often in this stretch by visiting anglers than the muskie. The upper Allegheny possesses a world-class trophy fishery for the king of the Esox family, as they reproduce readily and maintain a healthy population. It can be argued that the best muskie fishing occurs in the stretch of river designated “wild and scenic” by the state near Allegheny National Forest and the mountain town of Warren, PA.

When To Go: According to local guide Red Childress, there is no time of year when muskies won’t chew, just times when they’ll chew more often than others. Though Red has cut back on his mid-winter trips, he started his career guiding year-round, throwing jerkbaits through January and February. These days, he cites the summer months, along with November and December, as his favorite and most productive times on the water. But if you want to go in the spring, he’ll find you fish then, too.

What To Bring: If you’re fishing in December, bring gloves that won’t hinder your ability to work a rod. No matter when you visit, however, bring enough drive and adrenaline to help you work heavy 8- to 10-ounce jerkbaits all day long. It’s a tiring method of fishing–one that Red physically trains for throughout the year–but persistence pays. As for tackle, 7- to 8-foot medium-heavy baitcasting rods will deliver these big baits well, and well-made reels with level-winds are the norm. Red spools up with 80-pound braid, and tops off with a short 200-pound-test fluorocarbon leader.

How To Fish: There isn’t one kind of structure that Red prefers in the early winter, as the muskies can be relating to anything from shallow weed beds, to boulder-filled banks, to gravelly depressions provided their primary forage–suckers–are holding there, too. Though bucktails and crankbaits catch fish, Red says nothing works as well for him all year long as jerkbaits, such as those made by Phantom. The game is simple: keep casting and twitching and figure-eighting until you wear yourself out or a big old muskie takes a swipe. If you need a break, or prefer a more relaxing method, Red is never opposed to a bit of trolling.

Where To Stay: Your best options in Warren are the Holiday Inn or Motel Super 8, though there are a handful of non-chain, smaller motels in the area.