More brown trout breaking the 30-pound mark have fallen in the White River in Arkansas than any other body of... 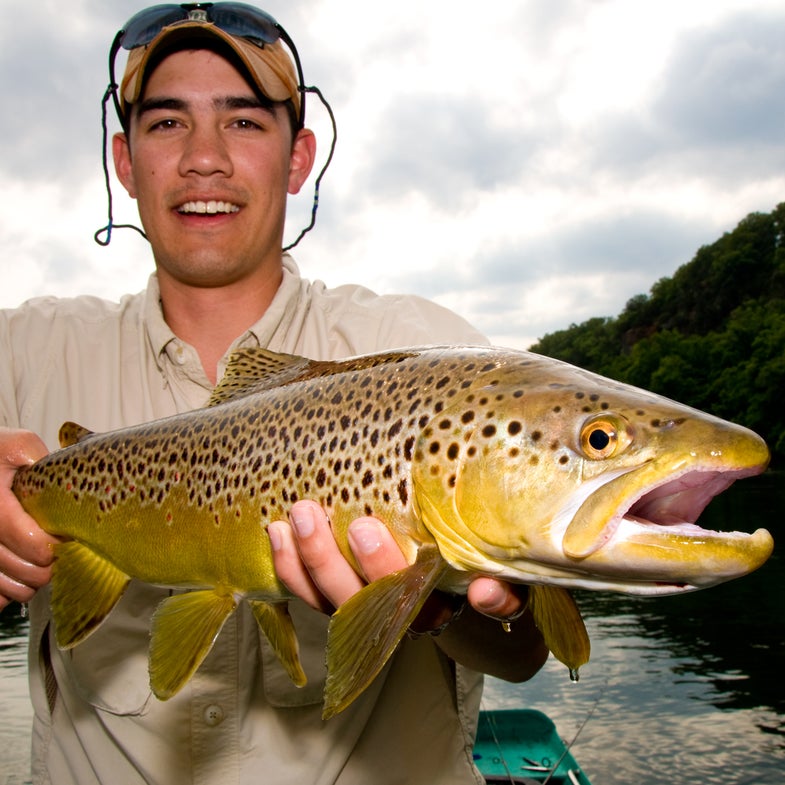 More brown trout breaking the 30-pound mark have fallen in the White River in Arkansas than any other body of water in the U.S. In fact, one of its tributaries, the Little Red River, actually gave up a former world-record 40-pound brown. A tailwater of Bull Shoals Reservoir, the White offers over 100 miles of trophy trout water that stays cold all year. In this episode, “Hook Shots” host Joe Cermele joins legendary guide Crazy Mike Neher and Alex Robinson of Outdoor Life to see who can score the biggest brute on stickbaits, jigs, and dead bait.

The Deal: Whether you want to lazily toss worms for the 1.5 million rainbow trout stocked in the White every year, or make your shoulders sore aggressively twitching stickbaits for the White’s monster browns, anyone of any age or skill level will score in this river. But the truth is, the guy watching his rod tip waiting for a bite on a live minnow has just as good of a shot at a 15-plus-pound brown as the guy sight-casting with jigs.

When To Go: Because the White maintains a temperature around 50 degrees all year, there is absolutely no wrong time to visit. There are, however, times of year that give up more big browns based on the conditions. In the warm months, frequent low, clear water can make the big fish spooky, though with a sharp eye and good casting skills, they can certainly still be fooled. Late winter and early spring are typically the best times to hook big trout because the water level is most often up, offering plenty of current that forces the fish into a reaction strike instead of giving them time to study your baits and lures. The plentiful 12- to 17-inch rainbow trout, on the other hand, will bite ferociously whether there’s a foot of water or a flood.

What To Bring: Though some great flyfishing opportunities exist in the White, by and large, this is a spincaster’s river. That’s partly because hatches are minimal compared to other rivers, and the big brown trout are most interested in meaty meals like rainbow trout and sculpins. Small marabou jigs are very popular on the White, and 6- to 7-foot rods with a slower tip and sturdy butt section work well for whipping them through the current and achieving the right rise-and-fall action. Make sure you also bring plenty of 3- to 5-inch jerkbaits in silver and white, and a stiff rod that can really get these lures ripping violently. Four-pound line gets the nod for jig fishing, and 6-pound has you covered for stickbaits and soaking dead or live baits.

How To Fish: Jigs should be cast at an angle slightly down current. However, working them effectively takes some getting used to. What you want to do is whip the slack up off the water while taking in only minimal line. This allows the jig to rise and fall backwards, sort of hovering in place as it slowly moves up current. If you prefer to feel crushing blows on jerkbaits, get ready for a work out. By far, the best technique is to jerk twice as hard as you can, then impart a short pause. When you get hit, you’ll know it. Many guides also lean heavily on fresh-dead sculpins, which they jig on tiny pieces of worm around shallow rock piles. These baits are typically skinned to expose their white flesh, and soaked in slower areas or in eddies.

Where To Stay: There are lots of fish camps and lodges on the White River near Flippin, Arkansas, but if you’re looking for a little more than a cheap room, we highly recommend Ken and Mary Ann Green’s Cedarwood Lodge. The lodges are gorgeous, the food is outstanding (request Ken’s smoked brisket), and nothing is more enjoyable than watching trout rise from the deck in the evening. If you have your own river boat, you can dock it right out back. For more information on planning a trip to Arkansas, visit the official website of Arkansas Tourism.

You won’t have trouble finding a guide on the White, but if you want the best, there’s only one: