**Minnesota is a state that ranks highly as a top producer of mammoth muskies. ** But that doesn’t mean catching... 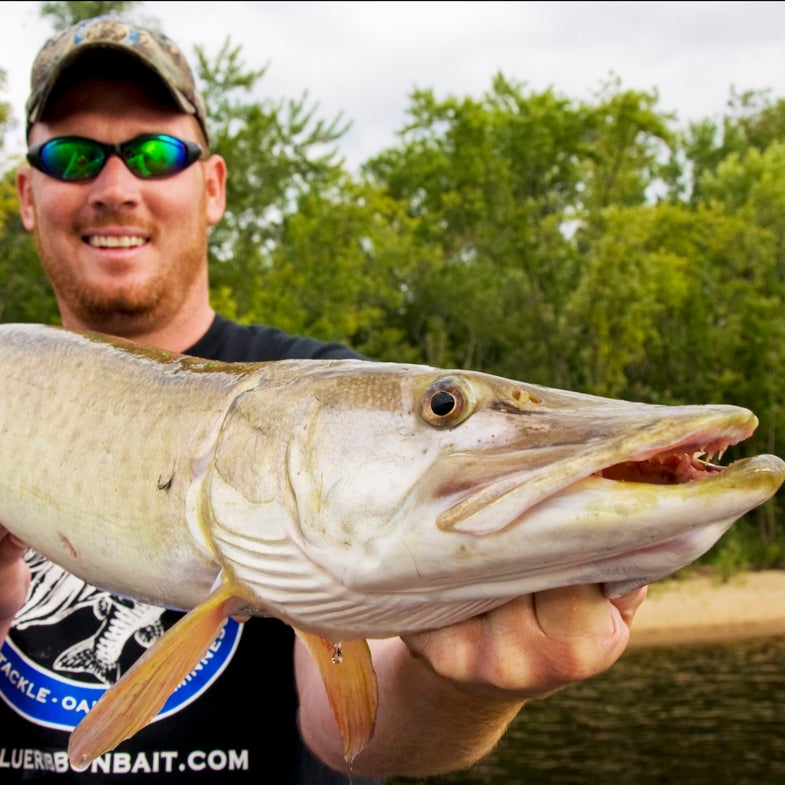 **Minnesota is a state that ranks highly as a top producer of mammoth muskies. ** But that doesn’t mean catching them will be as easy as tossing a worm and bobber for bluegills. Though the bite this August had been fierce, a cold front greeted host Joe Cermele upon arrival and totally changed the game on Lake Mille Lacs. So what did he do? Kept at it, shifted on the fly, took a few risks, and left Minnesota with the biggest muskie of his life.

The Deal: With more than 200 square miles of water, Lake Mille Lacs in central Minnesota is an expansive body of water that holds some of the biggest, meanest muskies and Northern pike in the state. These fish thrive around the vast weed beds that run along the shorelines, and suckers and whitefish provide excellent forage. Closer to the Twin Cities, the St. Croix River (which is another key player in this episode) offers anglers shots at big ‘skis in a moving water environment with a lot more varied structure, such as channel edges, rocky points, and sandy shallows.

When To Go: Both Mille Lacs and the St. Croix provide stellar action from June through October, with some play on either side of the season depending on weather conditions and water temperatures. According to Mille Lacs veteran guide Steve Scepaniak, hot, muggy, buggy spells really get the muskies on the feed. Guide Josh Stevenson likes the summer months for muskies on the St. Croix as well, especially considering pressure changes seem to affect river fish slightly less drastically than lake fish.

What To Bring: Much of Scepaniak’s summer program revolves around night fishing. The only problem with night fishing during a Minnesota summer is the bugs, so pack long pants and long-sleeve shirts, and don’t overlook head nets. Stout baitcasting outfits in the 7- to 9-foot range get the nod from both Stevenson and Scepaniak. Make sure the rod is fast enough to chuck heavy double-blade spinners and wooden jerkbaits without totally killing your arms. You want the rod to do most of the work, and sticks with too much give may not get the job done. Round profile baitcasting reels loaded with 80-pound braided line and topped with an 80- to 100-pound fluorocarbon or wire leader are the norm.

How To Fish: On the surface, muskie fishing is simply cast, retrieve, repeat. Dig a little deeper and things get more involved. Perhaps what’s most important is paying attention to every single retrieve. Though muskies will slam a lure, more often than not they follow first, and if you’re not watching your lure, you won’t see the fish. Regardless of the visual, before pulling the lure out of the water, you should figure-8 or L-turn the lure near the boat when it’s about a foot or so from the rod tip. Scepaniak likes an L-turn on every retrieve, whereas Stevenson is more inclined to only turn or figure-8 when he sees a muskie following.

Where To Stay: Figuring out where to park it during a Minnesota muskie hunt depends first on foremost on where you or your guide intends to fish. On Lake Mille Lacs, you’ll find no shortage of motels and fish camps, such as Eddy’s Resort or Fishermen’s Wharf Resort. You can search lodging around the lake at Millelacs.com. If you plan to stay closer to the Twin Cities and cast on the St. Croix River, you can get swanky at the Afton House Inn in the quaint river town of Afton, or choose from near-countless chain hotels and motels in the area.