The striped bass in Tennessee’s Watts Bar Lake never breathe saltwater, but that certainly doesn’t stunt their growth. This body... 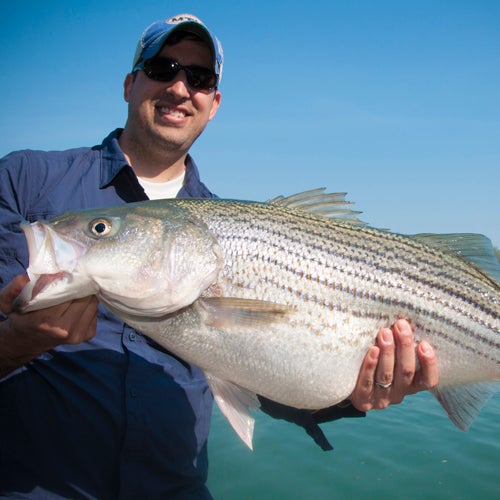 The striped bass in Tennessee’s Watts Bar Lake never breathe saltwater, but that certainly doesn’t stunt their growth. This body of water and the rivers that connect to it are home to some of the heaviest pure-strain landlocked stripers in the country, so “Hook Shots” host Joe Cermele jumped on a plane to Knoxville to see how the attitude and fight of these sweetwater bass stacked up against their salty cousins he knows so well. What he found out is that Watts Bar bass can be as fickle as ocean fish, but once they’re on the line, they don’t mess around.

The Deal: Roughly 40 minutes west of Knoxville, Watts Bar Lake receives more stripers per acre during yearly stockings than any other body of water in the state. Twenty to thirty pounders are a dime a dozen; forty to fifty pounders fall in Watts every season, too. Pull a live gizzard shad past the right fallen tree and get ready for an epic battle when a big girl decides to take a shot. If there’s any possible way for these fish to bust you off, they’ll do their best to make it happen.

When To Go: Tennessee’s striper fishery is viable year-round, though according to veteran guide Bud White, the winter months are some of the slowest. Because the rivers that feed Watts Bar are dam regulated, White says it’s rare for the water temperatures to climb higher than 65 degrees. That means you’re just as likely to score a huge bass in the dead of summer as you are in spring or fall. However, the spring months are prime, because while the stripers in the system don’t naturally reproduce, they do move into the rivers and make a “mock” spawning run. It’s during this time that they’re at their most aggressive.

What To Bring: If you’re planning to pull your own boat down to Watts, you’ll want four stout 7-foot baitcasting roads on board, each with a reel that holds plenty of 30-pound mono (or 50-pound braid if you prefer) and has a good drag. The most effective game in the area is pulling live gizzard shads 7 to 10 feet behind planer boards. White makes his own boards which float, so when a striper yanks the line free of the board, he can just run down and net the floating planer later. If you put stock in fluorocarbon leader, 40-pound will get the job done, as will a 5/0 to 8/0 octopus hook for your baits. White, however, ties directly to his 30-pound mono, and has no trouble wrenching big bass out of sticky cover. If you’d prefer to throw lures, Spooks, swimbaits, and stickbaits will turn fish, though by and large, livies trump lures.

How To Fish: White runs four baits on planers at all times, keeping two staggered in the channel, and the other two staggered tight to shore. He uses the trolling motor to maneuver the boat so his boards pass close to downed trees, stumps, ledges, rock piles, and anything else that breaks the current. If the bite is on, he’ll make as many passes along the same shoreline as he can before the fish slow down. If it’s a slow day overall, the trick to success is covering as much shoreline and as many different structure types as possible.

Where To Stay: If you want a little city atmosphere post-fishing, Knoxville is close enough to the fishing grounds that a stay in downtown won’t put you out of the way. You can figure out the best accommodations for your budget (as well as the best barbecue joint in town) by visiting the Official Website of Knoxville. If you want to be closer to the action and don’t care about touring the city, White recommends his clients grab a room in one of the many chain hotels/motels in Lenoir City. Click here to check out some Lenoir’s lodging choices.