Muskies are hard enough to catch with live bait, so why would you ever chase them on the fly? Because... 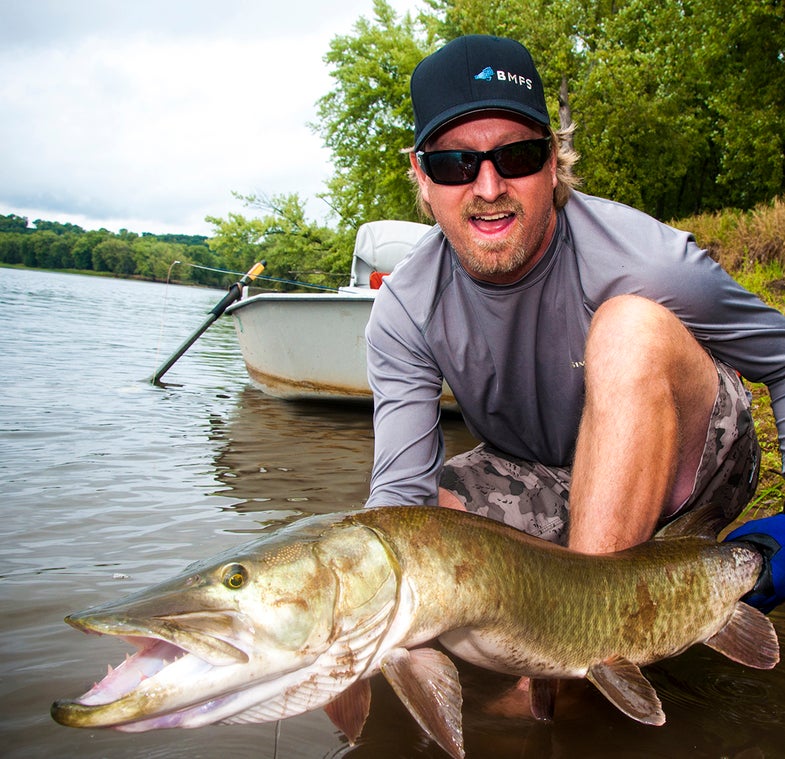 Muskies are hard enough to catch with live bait, so why would you ever chase them on the fly? Because for the cult of anglers that spend hours at the vise tying monster flies, then stripping them until their arms are ready to fall off, landing a muskie on the long rod is the ultimate victory. In this episode, Joe Cermele spends four days with four muskie fly nuts in Minnesota on a quest for a fly-caught ‘ski. It’s a tale of low lows, laughs, frustration, and eventually the highest of highs.

The Deal: If muskies are the fish of 10,000 casts with conventional gear, consider them the fish of 20,000 casts with a fly rod. Minnesota’s lakes and rivers are loaded with these fish, which is a critical first key factor in flyfishing them…if there aren’t many in a body of water, your chances of catching one just went down even further. It is a game for only the most dedicated flycasters willing to devote lots of time and even more energy to the pursuit, but when it all comes together and you land one, you can say you are part of a group of a fairly limited number of anglers that have accomplished the feat.

When To Go: If you’re going to flyfish for ‘skies, you need to do it when they’re at their most aggressive. In states where the season opens early enough, ice-out is a great time. If the season in your state doesn’t open until later, wait until temps start falling at the end of summer. The muskies know they need to start thinking about packing on pounds for winter, and your chances increase as late summer turns to fall. The anglers featured in this video don’t try to catch them during the heat of the summer for fear of release mortality in the warm water.

What To Bring: So you’ve got a nice 8-weight outfit, eh? Good. Now leave it in its case, go to the fly shop, and pick up an 11- or 12-weight. Not only do you need a heavy fly rod to cast the sopping wet masses of bucktail that make up a good muskie fly, you need a sturdy stick to help plant the hooks in a muskie’s rock-hard mouth when you strike. You also want an intermediate sinking line, or a floater with 6 to 12 feet of sink tip to get the buoyant flies below the surface. Add a leader of 30- or 40-pound fluorocarbon tipped with 12 to 15 inches of light cable, and you’re ready to go into muskie battle.

How To Fish: If you’re fishing moving water, muskie-fly Guru Gabe Schubert recommends always casting slightly upstream and bringing the fly down current past good structure. This presentation, he says, makes the fly look the most natural and best allows the material (bucktail, saddle feathers, Flashabou) to breathe on the pause. Gabe also stresses that it’s not necessary to kill yourself with a fast strip; quite often short twitches of the wrist that let the fly move in short bursts work better. If there is one element to catching a muskie on the fly that is most important it’s STRIP STRIKE, STRIP STRIKE, STRIP STRIKE, STRIP STRIKE. Say it over and over to yourself on each retrieve. If that big white mouth snaps shut around your fly and you lift the rod, you just blew it. Keeping your rod tip in the water while working the fly helps seal the strip-strike deal. Finally, L-turns and figure-8s are just as important in flyfishing as they are conventional fishing.

Guides: As there are not loads of people coming to Minnesota to flyfish for muskies, there really aren’t that many muskie fly guides. Gabe Schubert, who was featured in this episode, has been known to take anglers out when he’s not busy on personal muskie quests. If you really want to get on the water in the “Land of 10,000 Lakes” and try to stick a muskie on the fly, call Robert Hawkins. He owns Bob Mitchell’s Fly Shop in Lake Elmo, MN, and can hook you up with Gabe, or point you in the right direction for hiring a muskie fly guide.