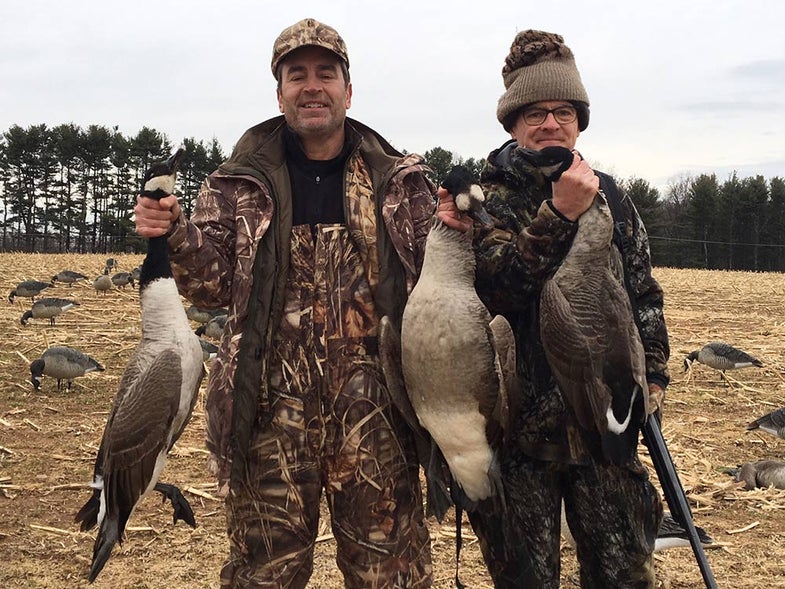 Ken Schmidt (left) and the author with the day's haul.. Bill Heavey
SHARE

I’ve escaped the flu so far this year, but cabin fever, after stalking me for weeks, caught up with me last week. I knew because I had a strong urge to growl whenever I heard the postman at the front door. So I arranged a late-season resident Canada hunt with Ryan Popp and invited my friend Ken Schmidt.

Maryland’s resident goose season runs about 2½ months, and by its final days, the gullible geese have been tagged. That leaves smart geese and the hunters gullible enough to think they’ve got much of a chance. But cabin fever leads a man to all sorts of foolishness. Besides, I didn’t need a chance. The chance at a chance would do for my purposes.

Popp, 24, is a waterfowl guides with Upper Chesapeake Outfitters. He also guides for stripers on his own. But don’t look for him on social media. He can’t remember the last time he checked his email. Like most Eastern Shore watermen, he’s too busy chasing waterfowl and stripers, yellow perch and deer. He gets about 1½ months of commercial crabbing in annually, then it’s back to the birds and fish. He hauls a trailer full of whatever sort of dekes, blinds, and waders he’ll need for that day. In early fall, he also guides in northern New York, following the ducks and geese southward around Thanksgiving. Not a bad life for a 24-year-old.

When we first spoke, he said he wouldn’t know the best spot to hunt until a day or two before, and that I should call him back then. So I did. And was run smack into the universe’s exquisite sense of irony. Of the thousands of square miles he might have picked, he mentioned a hot farm field near Jacksonville, Md., and asked if I happened to know the MacDonald’s on Sweet Air Road. If so, we’d meet there at 6 a.m. It happened that I did know it. I didn’t say that it’s 3.6 miles from the house and relationship I left in June and that part of me didn’t want to go anywhere near the place. If that’s where the geese were, that’s where we’d go.

The irony increased as, leaving the parking lot, we headed straight towards the old place, pulling over by a field of cut corn. Popp had already set out nine dozen dekes, and layout blinds just upwind of their J pattern. He explained that the geese had been using the field daily for the past week, as it lay a few miles from a reservoir and just 200 yards from the sanctuary of a state park. The field was less than half a mile from the old house. I’d passed it hundreds of times. As I lay back in my coffin, I reflected on how the Buddhists say that suffering is not real, it’s just something your mind chooses to create in reaction to something real. My mind was getting pretty creative. Shake it off, bud. You’re hunting.

We lay in our blinds, heads ever so slightly lower than our feet. I practiced flinging the doors open and rising to a shooting position a few times. In waterfowling clothes, a good workout for the abs. It was a humid, windy day that felt colder than the thermometer reading. I doubled up on hats and scrunched my toes to send some blood down there.

Geese began appearing about 8 a.m. Ryan and a buddy, Nick, called hard to them. Usually they’d circle three or four times, then think better of it. They’d seen too many spreads and could almost glide to the park. Finally, a group committed and cupped their great wings. Ryan called, “Take ’em!” I flung open the blind’s doors, sat up, and found that I’d concealed my gun a bit too well, having slid it beneath two still-rooted cornstalks. It was basically pinned to the ground. But Ken made a pretty shot to knock one down, and Ryan hustled off to retrieve it. An hour later—after many more window-shopping geese had admired our spread from just out of range, another group came in. This time I was ready. I shot twice and punched nice holes in the air. Then it was lunch time. We unloaded our guns and left them in the blinds. Just as we were returning to the blinds, Ryan, hissed, “Hustle, guys. Birds coming in.” As they landed, I sprang up, swung the barrel and made a beautiful click on a big goose. The bird landed and took off again unscathed.

By 3 p.m., we’d seen hundreds of birds. I loved the few seconds when all you could hear was their wings against the air. I never get over how loud feathers and air can sound. This was definitely the place to be. But these were survivors. They weren’t carrying a reckless feather on their bodies. I had to leave at 3:45 and wanted to get at least one of my two-bird limit. By 3:30, another half dozen groups had sailed by. And then—for a moment I thought I was imagining it—one finally set its wings and committed. My only shot was 35 yards, but I took it and a goose fell. Ken got his second bird. It felt good.

I said a quick round of goodbyes and hurried back to my car. All in all, a great day. And effective, too. Today, when the mailman came, I didn’t even yip.