From beanies to a balaclava, winter headwear for a bald man 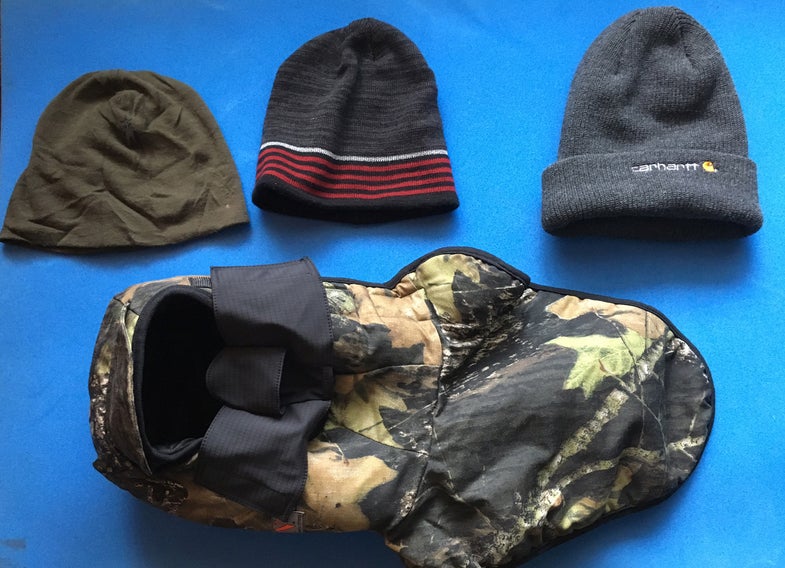 Left to right: the House Hat, the Man-About-Town Hat, the Carhartt 40-Gram Thinsulate Lined Hat, the Arctic Spaceman Balaclava. By the author
SHARE

The weather has just turned cold here, so I threw all my summer duds into 39-gallon garbage bags and went looking for the other garbage bags—some of which I’d even labeled Winter—with my lined jeans and Randy shirts. And, because bald guys lose up to 300 percent of their body heat through their heads, I made sure to find my hats first.

I need at least four levels of heat retention to guard my head through a winter.

• The House Hat. I keep the house at 63 degrees for two reasons. One is that I’m cheap. The other is that I’m poor. I don’t know whether I’m cheap because I’m poor or whether I’d still be cheap even if I were rich, although I hope to find out one day. Either way, I wear a lightweight SmartWool beanie inside. It’s olive green, weighs a couple of ounces, and is completely unremarkable. I choose to think of it like the caps one sees on people in medieval drawings or—come to think of it—”The Night Before Christmas” (“And mamma in her ‘kerchief, and I in my cap, / Had just settled down for a long winter’s nap”). I bet this hat saves me hundreds in heating bills annually.

• The Man-About-Town Hat. Don’t get too excited. This is not a fashionable hat, just one that’s a bit warmer and a bit less weird looking than the House Hat. I bought it online from Kohl’s, which advertised it as a 40-gram Thinsulate-lined hat. Except it isn’t. And after 90 minutes on the phone with somebody in Southeast Asia, I realized it was more trouble to return it than to keep it. It’s a product of the current age, which is to say that the outside is 100 percent acrylic, the lining is 100 percent polyester, and it was made in China. It’s manufactured by Tek Gear but the only techie thing about it is a ¼-inch reflective stripe in it. If you hold the fabric up to your mouth, for example, you can blow out a match 18 inches away. Which is absurd in a hat, but fine for windless environments, such as inside your car. And, of course, it doesn’t look quite as odd at the grocery store as the House Hat. I don’t care about impressing people. I just don’t want to scare children.

• The Carhartt 40-Gram Thinsulate-Lined Hat. It is much harder than it should be to find a lined beanie. It seems like a no-brainer. Take your basic acrylic beanie and put in that lining. But I couldn’t find one at Walmart or Target. Cabela’s carries a couple of models in brimmed styles, but I wanted one more easily stuffed in a pocket. Search “hat 40-gram Thinsulate” at basspro.com and you get “0 Matches” but can see their new Watchmen Beanie, which has no Thinsulate but a big Bass Pro Shops logo. I finally found one at Carhartt. It’s what you want—no frills, although the lining is now called Thinsulate Flex because Thinsulate all by itself doesn’t seem fancy enough. (By the time I received the hat, it was Thinsulate Platinum, which presumably entitles you to one extra carry-on item and pre-boarding.) It’s not windproof, but it’s pretty darn close. It’s more than twice as warm as an uninsulated beanie, at least judging by my sensitive pate. And, while I don’t particularly like wearing anybody’s logo—why any of us should be free advertising has always baffled me—Carhartt’s is relatively restrained. I can only think that the Thinsulate-lined beanie is so rare and difficult to find because it’s basic common sense. But every man should have a hat like this.

• The Arctic Spaceman Balaclava. If I’m hunting in cold temperatures, I’ll frequently wear a couple of hats, depending on conditions. If it’s sunny, something brimmed over or under something insulating. Or a lightweight balaclava or neck gaiter under another hat to keep wind from blowing down my collar. But if I had to just take one hat, it would be my Northern Outfitters Severe Hood, which has a polyester shell, a detachable piece that protects your nose from the wind, a nylon liner and polyurethane insulation, and two Velcro closures across the lower face, and it extends far enough down your chest to double as a lobster bib. This thing is the bomb. It’s windproof and exceptionally warm. You sacrifice a bit of hearing acuity on stand, but if you need this, everything around you is so frozen that the crunch of a hoof on snow can be heard at 100 yards anyway. Some people think it looks dorky. To which any bald-headed man would say, “Really? Explain to me how that’s relevant.”