When to Aim, and How Much

“Aim” is a bad word when it comes to shotgunning. Shooting a shotgun like a rifle and drawing a bead... 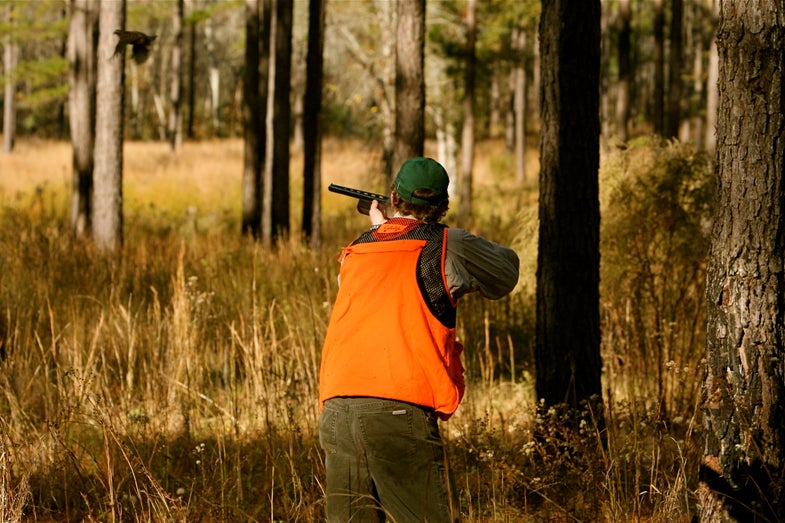 “Aim” is a bad word when it comes to shotgunning. Shooting a shotgun like a rifle and drawing a bead on a target pulls your eye off the bird and onto the gun, which then stops, and makes you shoot behind.

Or so I have always believed and said.

I will confess up front that the longest shot I ever made on an upland bird was on a perdiz I shot in Uruguay years ago. Backing up a friend who missed, I glued the bead to the bird’s tailfeathers as it flew away and killed it cleanly at every bit of 60 yards. I remember looking back and forth between the bird and the bead and thinking “should I take this?” and realizing the two were perfectly aligned and then I pulled the trigger. Nevertheless, like a lot of people, I still preach 100% visual focus on the target and none on the bead. Aiming works for straightaways and 60 yard perdiz, but not so well on targets you have to lead.

That’s my story, and I stuck to it until I gave a shooting lesson yesterday. Rachel, who runs the Edible Outdoors program I sometimes help with, has never actually been hunting. Springerman3 and I decided she should go on a dove hunt with us (I know, I know: second prize, two dove hunts with me and Springerman3).

Anyway, we divided the pre-hunt labor. SP3 is finding doves, at which he excels. I am giving the shooting lessons. Rachel is a good student, and does whatever I tell her to do. It didn’t take long for her to crush straightaways, but incoming and crossing targets were a problem. She was shooting above, over and/or in front of everything. She would move the gun smoothly and at the target’s speed, but in to discernible relationship to the bird.

I asked her what the difference was between the straightaways and the crossers. “I can aim at the straightaways,” she said. Rather than go into my usual “all your focus on the target let the gun go where it wants to” routine I said: “Okay, I usually don’t say this, but go ahead and aim at this next crosser just a little bit.” And she crushed it, then another one, and by the end of the lesson she was hitting high and low house 4 crossers, which require the longest leads on the field. I was beginning to think the doves might have a problem on Friday morning.

Watching her muzzle, I could tell she still have both eyes on the target, but now she was aware of the relationship between the gun and the bird, and that made all the difference. The takeaway here is not that you should aim, but that you have to be aware of the muzzle just a tiny bit. Instructor Gil Ash, who spends more time thinking about shooting and vision than anyone, bucks the traditional “100% visual focus on the target” advice and says it’s more like 95% focus on the target and 5% on the muzzle. Honestly, that strikes me as about right. See the bird sharply, but see the bead – which should be a blur – in relation to the target. That’s my new story, and I’m sticking to it.