Why I Don’t Take Long Shots When Deer Hunting 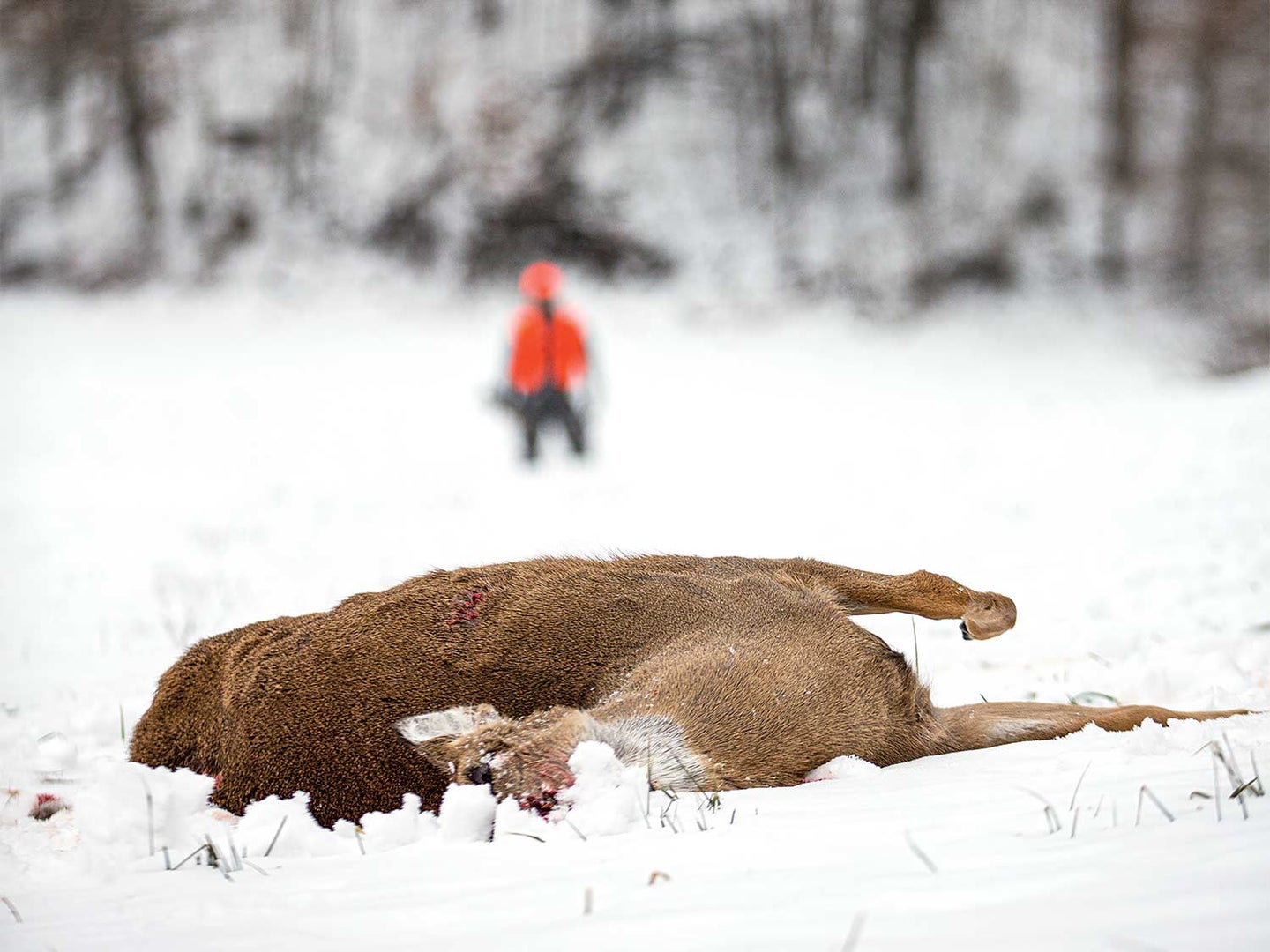 I’d been in the treestand for an hour and a half when the doe walked into the field. It had been an hour and a half of pure bliss. The trees were painted in fall colors. The blue sky was so crisp, it was hard to look at. I’d seen the tail end of a small buck cross the back field not long after I’d settled into the stand, so my head was on a swivel. The hunt had an air about it that anything could happen. It was one of those sits where you feel like you could sit forever.

I watched the doe cross the pasture, undisturbed, tail flicking, pausing to browse after every few steps. The deer was just what I wanted. A decent doe, alone, with no young around. Out in the open. Loading would be a snap. It doesn’t get any easier.

So I watched her for a minute—then two, then four—and I knew what was happening inside my head. There are times when I take the easy shot, and I’m thankful for it, and there are times when I will drive an hour and climb a tree and watch a deer through the scope, finger on the trigger, and tell myself, over and over, boom and boom and boom, but the rifle never bangs. I shoot when it feels right. Sometimes I just never know.

I totally agree. I structure my life around everything that happens up to the moment of the kill, and everything that comes after. I love packing up and driving out to my deer lease in the late-afternoon light. I love climbing into a stand. I love the turning of the trees and the pregnant feel of the air during the rut. I love the hands-and-knees tracking, the pit in my stomach as I work to find the deer, then hauling it out of the woods. I even love the bloody parts—the field dressing, the butchering, the works.

I especially love the trigger squeeze. I will sit at my office desk, rack a bolt, and squeeze the trigger 10 times in a row. When you know a rifle and its trigger, there is something intimate about taking a shot. I love moving the crosshairs into play and watching them settle. I love the feeling as I exhale and try to still my heartbeat before the trigger squeeze. I love every single moment of it all—except what happens in the fraction of the second after the trigger sear releases, the striker hits the firing pin, the powder ignites, and the bullet leaves the barrel. I want what comes next over and done with as quickly as possible.

I watched the doe take the shot and bolt toward the woods. I tracked her in the scope. She ran maybe 40 yards before she crumpled on the field edge, kicked three times, and died.

What’s Not to Love?

In nearly 40 years of deer hunting, I can only remember two deer I shot at that I didn’t bring home. This is not a boastful statement. You might even call me a timid rifleman. But I am a very good shot at the shots I take. I just tend to shoot deer fairly close—inside 150 yards, almost always—and in the open. I don’t take chances.

It’s not that I’m incapable of longer shots, but this isn’t about numbers. I’m not talking about distance, really. My 200-yard stretch might be your 700-yard chip shot. I’m just being super honest with myself about my abilities and experience, and super fair to an animal that could pay a gruesome price for my hubris and carelessness.

I think we could use more of that self-reflection in the woods. We hear all too often of hunters who stretch it out. Who sight in their rifles only after they miss a deer. Who muse about a miss without accepting the fact that they likely just wounded the animal. Who come back to camp with stories of overly long shots at big deer just because. A whitetail buck that’s lived that long, sneaked past that many hunters, and moved like smoke through that many dawns deserves the most carefully considered shot, not some why-the-hell-not-Hail-Mary. No one wants to be the deer-camp nanny, wagging a disapproving finger. But there was something instructive about the old walls of shame, where you lost a shirttail when you missed a deer. It was as if the community around you came together to say: Look, buddy. It happens. But from here on out, we expect a litte more of you.

I do not sugarcoat what happens in that moment after I pull the trigger. I want the animal to die as quickly as possible from massive trauma and shock­—­a­nd I want to be shocked if that doesn’t happen.

That’s how I can love it all.

My buddy’s dad came down with the four-wheeler, headlights slashing the dark. I was crouched by the doe, waiting. Mr. Knight has nurtured and nourished this farm and its wildlife for four decades, but busted knees and hips keep him out of the stands these days. He doesn’t hunt anymore.

“Just the one shot?” he asked.

And I loved the look on his face.