Weather Stripping: Why You Should Throw Meat Flies in Early Spring

The April streamer bite in the Northeast can be red hot, even when the air suddenly turns ice cold 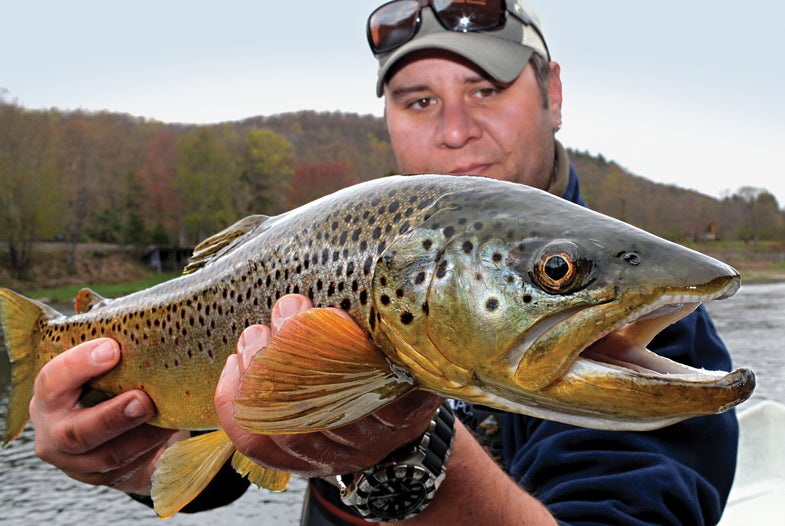 The author with one of the browns from this frosty float.. Jimmy Fee
SHARE

The tiny white rental house was perfectly isolated, set back across the railroad tracks on the far side of a field. No TV. No Internet. No cell service. One of my favorite pools on New York’s Delaware River flanked the backyard. It was 65 degrees and sunny when I arrived that afternoon, and it took no time to hook a fat brown on a dry fly 10 steps from the door. Then everything changed.

The problem with April in the Northeast is that it can never decide if it wants to be spring or winter, and by 10 p.m., my idyllic little fishing cabin became a house of horror. The frigid wind shook every beam and window. The whoosh of every gust roared around the outside walls. The pings and clangs of the ancient pipes and radiators echoed around me. My fishing partner, Jim Fee, wouldn’t arrive until well after midnight, so I just curled up in bed, winced at every creek and shudder, and hoped that structural failure or a visit from some local psycho wouldn’t quash tomorrow’s streamer mission.

Fee, it turned out, was just as spooked driving the dirt road over those tracks during the wee hours of the morning as I was trying to sleep inside. We had a good laugh about it over coffee but couldn’t decide what was funnier: our wimpiness, or the fact that it was snowing and I didn’t bring heavy socks. The weatherman had predicted a cold front all right, just not this cold. We both wondered if our friend and guide Joe Demalderis would call the whole thing off, but ever the optimist, quitting never crossed his mind. When we launched his drift boat an hour later, I already couldn’t feel my hands, and I’d yet to strip in a single foot of wet fly line.

April has always been one of my favorite months to cast big streamers to trout, maybe because I’m a bit of a gambler. The fish have been living pressure-free all winter, but they’re also just waking up for the season. Throwing meat flies is a roll of the dice, but when it’s good, every fish in the river is in the mood for meatloaf.

Demalderis told us that the river browns had been smacking the big stuff in the warm days prior, but the bite hadn’t exactly been on fire. Now, as he rowed against 30-mph gusts that cut through my fleece like a sickle, I couldn’t imagine the fire would be lit at all, let alone raging. By 11 a.m., the best thing going was that the snow had stopped, the wind let up a hair, and the sky shifted from slate gray to steel gray. It was also around this time that Fee let out a gasp from the bow as the wide, white mouth of a big brown opened at the edge of a riffle and clamped down on his streamer.

The trout measured exactly 20 inches, its gold flanks beaming against the muted, wintry surroundings. We all agreed that given the conditions, we’d be happy if this was the only brown that came to the net today. Not far downstream, as I swung a white Zonker off a slow bank, I watched an even bigger brown track the bug. When my line straightened downcurrent, the fish hung behind the fly as if trapped in slow motion. I made a short pop and muttered, “Oh God, please eat it,” and it did. In less than 15 minutes we had a 20- and a 21-incher. Suddenly the window was open, and I forgot that I could not feel my toes.

I’ve never been a huge fan of white for streamers, despite its being a staple color in any trout box. Black or olive is my first choice, with yellow being the backup if the favorites blank. What I learned that April day, however, is that you never fish an Eastern tail­water in spring without white. Many of the reservoirs that feed these rivers are home to alewives, and somewhere between the third and fourth chunky brown we hooked, Demalderis explained that with the spring melt, these silvery baitfish sometimes spill over the dam. In essence, this creates an alewife hatch. It’s hard to say if that’s what we were experiencing or if white just happened to be the hot color, but when we started at least flashing a brown on white every 100 yards or so, we didn’t care. Not one other boat was on the river, and for the time being, we were dialed in.

In just a few miles we had sunk the net around four browns over 20 inches and a handful in the 14- to 16-inch range. For every one we landed, we moved two. The only reason we didn’t catch more was the fried chicken. We’d pulled over to the bank to enjoy some salty, cooler-chilled, battered goodness and to recount the takes and swipes of the last few hours with greasy, smiling lips. Maybe it was the angle of the sun or a change in the barometer, but despite having several good miles of water before the takeout, we never moved another fish after lunch. The window had closed.

The next day dawned, and April decided to be spring again. By noon Fee and I had stripped down to our long-sleeve T‑shirts. We had also stopped stripping streamers, which moved only one trout in the first 4 miles of the float. We picked a small brown on a nymph here and a little rainbow on a dry fly there.

As I soaked up the afternoon sun, feeling the first burn of the season starting on my cheeks, all I could think was that I wanted April to be winter for just one more day. I’d happily suffer the snot-dripping nose and numb fingers all over again if it pulled those big browns out from wherever they were hiding now.

TIP OF THE MONTH: Lose the Weight

Whether you tie on a streamer with a conehead, dumbbell eyes, or a beadhead, the weight will give the fly a jigging action on the retrieve. There’s certainly nothing wrong with that, but many streamer addicts (myself included) opt for unweighted flies when targeting trophy browns. Fishing them requires a sink-tip line to get them down, but when stripped, unweighted patterns will dart, change direction, and hover on the pause. All of these actions better mimic live prey trying to escape a big brown, and make the fish more likely to go for the kill. —J.C.