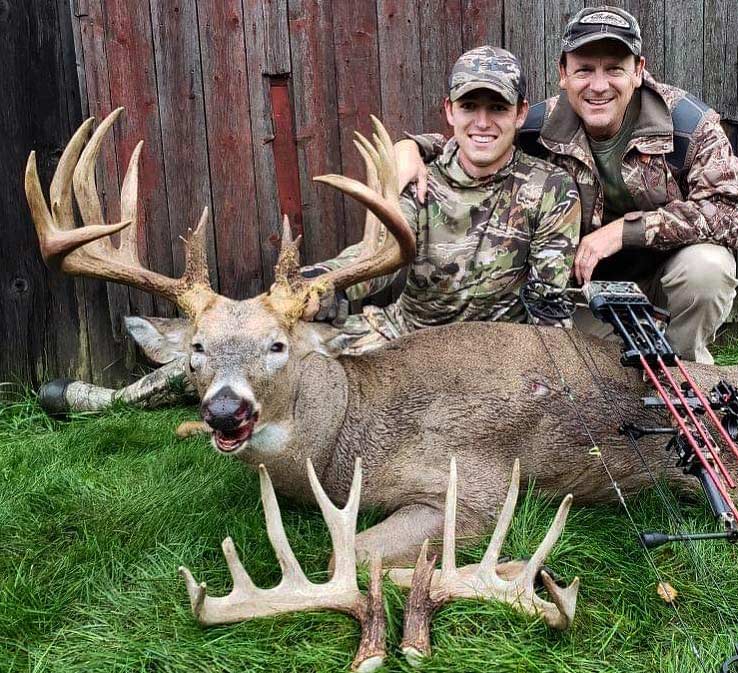 When Matt Wachowiak, 23, of eastern Wisconsin arrowed this giant Badger State whitetail last month, he did a lot more than fill his 2019 buck tag—he put an exclamation point at the end of a three-year campaign to ultimately take this particular animal. Wachowiak’s monster whitetail, which he killed on September 28th, sported 15 scorable points and grossed 200-2/8 inches non-typical and netted 194-4/8 typical.

Wachowiak, his brother, and his dad—along with the help of habitat specialist Corey Baker of High Tine Addiction—had worked hard to improve the cover and food on the family property for many years. That work paid off when a buck they named “The Prince” move in. “We’ve learned that if you give a mature buck the things he needs—food, security, and water—his world can get pretty small,” Wachowiak says. Judging by their trail-cam pictures, The Prince was spending a lot of time on a particular part of their farm.

It didn’t take long for the hunters to realize that this buck was special. “The Prince was a genetic freak,” Wachowiak says. “Two years ago, he was a 140-class buck, and his body was just tiny in relation to his rack. The next year, he took a huge jump in antler growth. He was 160 to 165 inches and had become one of our target bucks. We got pictures of him pretty consistently, but the neighbors—who are good friends–were also getting pics of him.”

“We like to put food plots close to bedding areas, and one of our plots—which is about 25 yards by 25 yards—was close enough to The Prince’s bedding area that he would hit it during daylight hours before heading out to visit bigger farm fields in the area,” says Wachowiak. “He’d only be in there for two or three minutes at a crack, but it would always be during legal shooting light.”

The Wachowiaks learned that they could sweeten the attraction on the property’s small food plots by adding a cedar post with a licking branch. “Every time The Prince would hit that plot, he’d go right to that licking branch,” says Wachowiak. “He was in that plot all the time.”

Wachowiak had multiple encounters with The Prince during the fall of 2018. “During one stretch from October 26 through November 7th, I had six different sightings of him from a treestand, but something would always prevent me from getting him within bow range. At one point we’d heard that the deer had been hit by an arrow. I was sick for a while, wondering whether he’d survive. But not long afterward, I was getting trail-cam pics of him chasing does.”

On the opening morning of Wisconsin’s 2018 firearms season, Wachowiak saw first-hand that The Prince had survived the arrow wound. “Just before legal shooting light, I saw this big buck coming in,” he says. “When he was at 30 yards, I knew it was The Prince. I checked the time on my phone, and it was still six minutes before I could shoot. I kept thinking: Just stick around a little longer.” But the buck seemed to be on a mission to get elsewhere, and Wachowiak just watched him walk off. “That was it for encounters for that year. We have some good food plots to help deer through the winter, but we don’t hunt them much in December. We got plenty of pictures of him on those plots, though, and in February I picked up one of his sheds.”

When the next summer rolled around, the first card Wachowiak pulled from any of his trail cameras had pics of The Prince. “He’d taken another huge jump in antler growth,” he says. The buck was traveling with a huge main-frame 8-point that they called “Mr. Great.” Most of the pics were in the a.m., so on the opening morning of the 2019 archery season, Wachowiak decided to go for broke and hunt The Prince on the food plot with the cedar licking branch. “I walked in there well before light and bumped what sounded like a big deer off the food plot. When I checked the camera later, I had pics of Prince staring at me, then running off as I walked into the stand. I was just sick. I was afraid he wouldn’t come back to the plot after that.”

Wachowiak decided to rest the farm in the wake of the encounter. “Ten days went by before I started getting pics of The Prince and Mr. Great on that same food plot in the evening on my wireless camera,” he says. “I checked the weather, and there was a cold front coming in that weekend. The wind wasn’t right for the plot on Friday, so I decided to wait until Saturday to try him on an afternoon hunt.”

Wachowiak climbed into his stand and started seeing deer right way. “By 6:00 p.m. I’d seen 14 different deer, but no sign of the two big ones,” he says. “At 6:35 I stood up, and about five minutes later I saw Mr. Great approaching the food plot. I knew The Prince would be right behind him. As Mr. Great came to the licking branch and stood at 10 yards, The Prince came into view, walking toward the plot. I wanted to draw my bow, but Mr. Great was still in full view, and I was worried he’d spook. Finally, he stuck his head into the licking branch.”

Prince stepped into the plot and was already in bow range. “I drew as The Prince stepped into the plot. He was already in bow range. I settled in, took the shot, and everything felt perfect,” Wachowiak says. “He just tore off the plot like crazy. I backed out and decided to call the neighbors, because they’d been a big part of this. I described the shot, and one of them said ‘I bet we find that buck within 60 yards.’ Once we got on the trail, I panicked a bit, because we found almost no blood—only five drops or so within the first 40 yards. But suddenly one of my neighbors shouted, ‘Here he is!’ The buck had only run about 50 yards and tipped over. I’d hit him perfectly.”

The three-year campaign with The Prince had finally come to an end, as Wachowiak put his hands around the buck’s huge antlers.”His tine length hadn’t increased a bunch over the years, but he’d just added tons of mass, which he carries out to the ends of his rack. He had 7-inch bases, and well…it’s just one of those racks that you hold and say, ‘Wow!'”