Some wedding jewelry you didn't know you needed 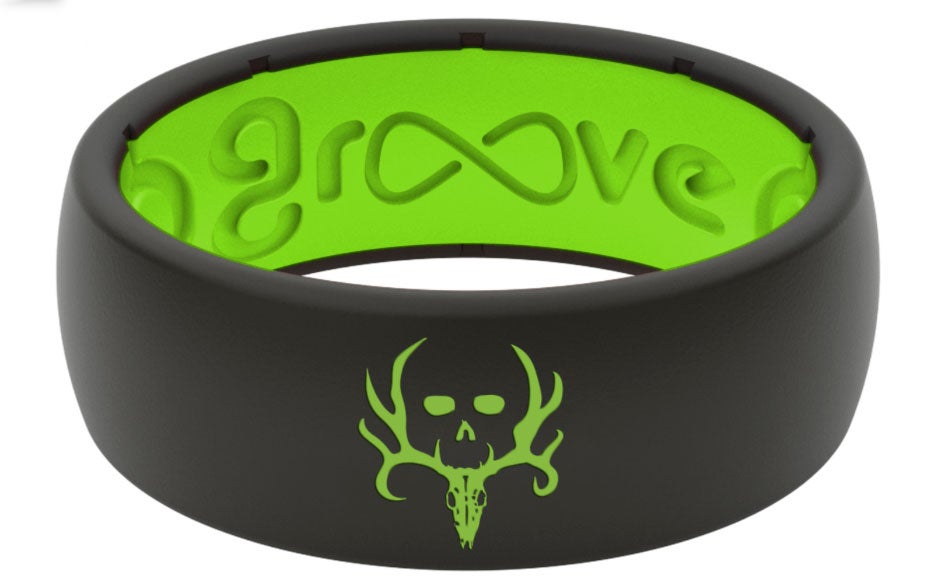 The Bone Collector ring in midnight black and green. From groovelife.com
SHARE

In the video below, Michael Waddell is very excited to tell you about the Groove silicone wedding ring. He starts the 3-minute video by creating a shared interest: “If you’re a married man and you are always wanting to look for a better option than the old typical metal wedding band…” Okay, I started to fall asleep right there. Any married man who is always wanting to find a better wedding ring is, to my mind, a guy who doesn’t have enough to do. What the married men I know are always wanting is to make a decent living, keep their wives and kids happy and doing well, and carve out some time for hunting and fishing.

But, look: Metal wedding rings make noise when you rap them repeatedly against your bow, gun, or spear. This can frighten game. Also, they’re hugely dangerous. They can catch on treestand steps, sharp edges, and pretty much everything else that has ever been created. They’re basically widow-makers. This problem could plague as many as 1 in 1,000 sportsmen.

Founder Peter Goodwin “needed a wedding band that was on par with his other adventure/work gear,” according to the Groove website. This thought came to him “on the banks of the famous Moraine Creek in Katmai National Park.” The ring is made of high-grade silicone. It has grooves on the inside so you don’t get hot and sweaty, as with other rings. I can’t tell you how many times, when, as a married, ring-wearing man, I nearly fainted from the heatstroke caused by my ring.

The ring comes in about 100 colors. The website pictures look like something out of a Patagonia catalog. People who buy Groove rings spend the majority of their time rock climbing, camping in remote areas, walking on their hands down highways, and catching world-class tarpon on fly rods. I tried to scroll through all the rings and lost count. But there are rings for sports teams, first responders, and American patriots, and others that feature camo, topo maps, and what seem to be tire tread patterns. Michael Waddell’s favorite model? Bone Collector, which comes in two colors: midnight black and midnight black with bright green on the inside of the ring (shown above).

The rings are guaranteed for life. They go for $30. A little custom-engraved metal box for your ring is an additional $9.95. You can watch Michael Waddell’s pitch here:

Unintentionally reflecting our polarized country, reviews on YouTube are split into two camps—the people whose lives have been changed for the better by their new rings and the people who think it’s a huge waste of money. I tend to agree with the naysayers. Why not just take your ring off when you don’t want to wear it?