Sport and flyfishing have prime floor space in Florida this week for the world’s largest fishing convention, the annual show... 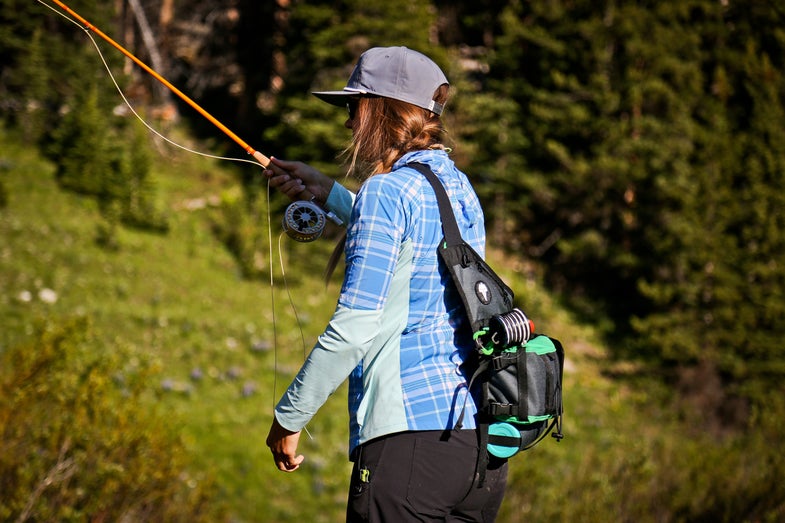 Sport and flyfishing have prime floor space in Florida this week for the world’s largest fishing convention, the annual show of the International Convention of Allied Sportfishing Trades (ICAST) and the International Fly Tackle Dealers (IFTD). The gear headed to your local shop in the coming months is on display at this event, and a few of the showstoppers this year were women-specific.

The wait is finally over for laceless wading boots with changeable soles for women. The Dark Horse, on shelves by Christmas, is the first female-friendly wading boot with the boa system; the boots have a 48-strand cable with a tightening dial instead of laces, a lifesaver when you have cold fingers. The boots come with rubber and felt soles; check out the Triple Threat tread system for rubber soles sold separately.

These new angling-inspired leggings from Alaska-based FisheWear come in such patterns as rainbow trout and pheasant tail. But, more importantly, they add warmth and eliminate the bulk of pants when worn under waders. They also allow for a fast change between river and restaurant. And should you decide to head afield without waders, the leggings boast UPF +50 sun protection.

The strap on this new women’s sling has four-way stretch and no buckles, so it has a snug, slide-free fit to suit women’s build. This new product deserves double mention because it’s for ladies and lefties. Vedavoo has designed the sling to sit opposite your casting arm, with southpaw versions available upon request. Plus, it’s not pink, so it has that going for it, too.

If you think this fly vest resembles a shooting vest, you wouldn’t be wrong, because it’s designed to double as one. So, unsurprisingly, anglers aren’t the only ones buying it. Lady shooters, especially in hot zones like Texas, are buying it to wear over tanks. It’s a one-vest, two-sport deal; it can be forgiven for its pink accents.

I admit not much puts a twinkle in my eye when it comes to tippet. But Cortland has come up with these rubber-stacking tippet spools that are nifty. My favorite part: The color-coated stretchy bands that hold the tippet in place also double as hair ties, so in a windy pinch, you have a ponytail.

Nissan Titan with Around View Monitor

Okay, this isn’t a strictly female product. But it’s cool, so whatever. With the Titan’s Around View Monitor, you’ll no longer need a complicated two-person commotion to hitch the boat up for a day at the lake. Nissan eliminates the arm-waving shouting match with a rear tailgate camera, offering a view of the hitching post. A monitor on the dash makes it so that you can easily hitch a boat solo.